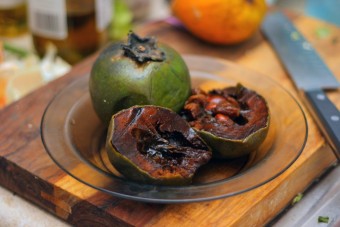 Recent headlines that chocolate supplies could fall short of demand by as much as a million tonnes by 2020 have been alarming. Those in despair over the news can take heart, however, as substitutes are available to get you through the rough times, including one that is actually relatively healthy – black sapote.

Native to the coastal regions in and around Central America, black sapote is a fruit, related to the persimmon, and it is today cultivated primarily across the Caribbean, as well as in Mexico, Australia and the Philippines.

On the tree, the fruit sort-of resembles a green tomato when ready for picking. And it is extremely important that you don’t try to pick it too early or eat it right off the tree.  Unripe black sapotes not only don’t taste like chocolate, but are quite gag-worthy.  Further, if it’s picked too early, the fruit won’t ever ripen and will simply rot, which one imagines doesn’t improve the flavor over the non-rotted, unripe version.

Picked at the right time, though, the black sapote will ripen within about 3 to 6 days after harvest. When this happens, the formerly white pulp turns a deep brown and develops a distinctive taste that, together with its papaya-like texture, have caused many to compare it to chocolate pudding (hence the nickname, “chocolate pudding fruit.”)

The pulp can be eaten as is (but not the skin), but given that it tastes a lot like chocolate pudding, it’s also commonly used in various recipes as a substitute for chocolate.