June 30, 2015 Karl Smallwood
Ron17 asks: How do they decide who gets to guard the tomb of the unknown soldier? 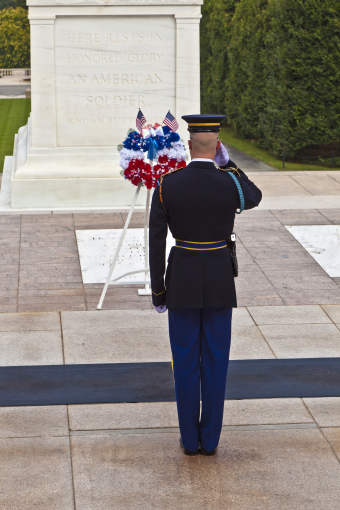 Since 1937, the Tomb of the Unknowns has famously never once been left unattended with there always being at least one guard present to keep vigil. The highly coveted position of Tomb Sentinel is only meted out to truly exceptional soldiers, all of whom must prove their dedication and mettle through a series of grueling and somewhat unusual tests.

For starters, to even be considered for the position of Sentinel, a given soldier must be a member of the 3rd U.S. Infantry Regiment, who are colloquially and rather aptly known as the “Old Guard” due to being the oldest currently serving unit in the US military, with the unit’s history stretching all the way back to 1784. Because the Old Guard is tasked with the solemn duty of handling some of the most sensitive and delicate obligations the Army has to attend to, such as welcoming foreign dignitaries to the country and escorting the coffins of fallen soldiers during military funerals, it invariably only recruits the best and brightest soldiers it can find.

Along with possessing a flawless record, any soldier hoping to be recruited by the Old Guard must be in excellent physical condition, be in the top percentile of military aptitude tests and possess a number of “intangible traits” the military doesn’t bother to define in any source we could find. On top of this, soldiers must also have “proportionate weight and build” to their height, limiting the post to only the very finest physical specimens the Army has to offer. This is because the members of the Old Guard in many of their ceremonial duties are supposed to represent the entire army to the outside world.

After becoming a member of the Old Guard, a soldier can, if they so choose, apply to be a Tomb Sentinel via the Sergeant of the Guard by simply knocking on the door to his or her office and stating interest. While this is rather simple, to be considered and score an interview, a soldier has to have distinguished themselves from the rest of the Old Guard with their dedication and conduct, as well as possess the aforementioned unmistakably “soldierly appearance”, the exact meaning of which isn’t abundantly clear.

After this the soldier will then be given a two week trial period where they will be given basic instruction on the history of the Tomb and Arlington National Cemetery (both of which are extremely interesting, see: Who is Buried in the Tomb of the Unknown Soldier? and The Fascinating Origin of Arlington National Cemetery). They are also tutored in the expectations placed upon Sentinels and their general duties and given a crash course in how to maintain their uniform (which is much harder than you might think as we’ll get to in a moment). At the end of the trial, the soldier will be given a test on each one of these points which they’re expected to pass with only a 5% margin of error. If they fail any test, they will no longer be considered for guard duty.

Any soldier able to pass this trial period will then be handed over to a seasoned Tomb Sentinel for a year of additional training. Under the tutelage of the experienced Sentinel the soldier is expected to, among other things, learn 17 pages of additional detailed history about the Tomb and cemetery which they are expected to recite back on command perfectly and put in written form including all relevant punctuation, with only a few mistakes allowed.

Furthermore, trainee Tomb Guards aren’t allowed to laugh or even smile while they’re on duty (even in the guard house) and are expected to hold themselves in the most respectful manner possible at all times due to the close proximity of said Tomb Guards’ quarters to the Tomb itself.

According to an interview Sentinel Andrew Selga gave to the Washington Post, during their training period, trainees are also told that they’re not allowed to acknowledge the existence of furniture while on duty, even if that means walking straight through a chair. This is of course used as a way to get trainees used to ignoring pain of fatigue, as well as outside influences, while remaining stoic in most every situation.

Then you have uniforms. The basic uniform of a Tomb Sentinel consists of a heavy wool uniform that weighs in excess of 10 pounds on its own, an M14 rifle outfitted with a custom stock, heavy boots with metal inserts to assist in making that signature “click” sound everyone loves so much and a host of smaller adornments like belts, holsters and a pair of sunglasses to help shield a guard’s eyes from glare. It’s noted that trainee guards will sometimes spend in excess of 10-12 hours per day just cleaning and preparing their uniform to get it to the exacting standards of their superiors who themselves will spend about 6-8 hours cleaning and pressing their own uniforms, despite their extensive experience in the task. As part of this preparation, the badges, buttons and medals on the uniform must also be accurately placed to within “1/64th of an inch”.

The uniform standards for the Tomb Guard are so legendarily strict that to pass the test to become a fully fledged member of the unit, trainees will be asked to present themselves in uniform whereupon they are marked on 100 individual points by a superior. Prospective guards are allowed only two minor infractions during this test (so must achieve 98% or greater). In keeping with the ideal that the Tomb Guards must always strive to be better, nobody has ever been given a perfect score.

For the most part, the uniform of Tomb guards remains pretty much unchanged throughout the year, with the only real changes occurring in winter, when the guards are permitted to wear seasonal appropriate hats and gloves if they so choose. For anyone curious about what would happen in the very likely event a guard turned up for his or her shift and felt that it was too cold or hot for the uniform, according to the aforementioned Sentinel Andrew Selga they’d simply be told to “suck it up”.

Not that many guards would complain; in fact, most guards with this duty consider it an honor to be tasked with guarding the tomb during the most extreme bouts of weather, which probably explains why the tomb has remained under guard during extreme heat, snow, hail, rain and the occasional hurricane. In the most extreme weather, such as during the relatively recent Hurricane Sandy, they are allowed to stand watch in a small enclosure known as “the box”, made of cloth with an open front, but for no more than two hour intervals before resuming their march. In that particular storm, one Sgt. Shane Vincent volunteered to take an entire 24 hour shift, though occasionally his fellow guards joined him for support.

If and only if a trainee is considered ready, they will be given the honor of conducting a “walk”, which basically entails what a fully fledged guard would do, only it is conducted at night, away from the prying eyes of the public and under strict supervision. In accordance with tradition, a walk consists of the following:

While on duty the sentinel crosses a 63-foot rubber surfaced walkway in exactly 21 steps. He then faces the Tomb for 21 seconds, turns again, and pauses an additional 21 seconds before retracing his steps.

The cadence of the march and placement of feet is strictly graded and the number 21 is of paramount important to a successful walk as it is symbolic of a “21 gun salute”. (See: Why Do They Use 21 Guns in the 21 Gun Salute?) After a walk duty is completed, the guard will then be relieved of his or her position with an elaborate changing of the guard ceremony, which occurs every one hour in the winter and every half hour in the summer and proceeds as follows:

a relief commander salutes the tomb and announces the change. ‘Ladies and gentlemen, may I have your attention please. I am (name and rank) of the 3rd Infantry Regiment, United States Army, commander of the relief, Tomb of the Unknown Soldier. The ceremony you are about to witness, is the Changing of the Guard. In keeping with the dignity of this ceremony, it is requested that everyone remain silent, and standing. Thank you.’

He inspects the oncoming Soldier and his weapon (depending on whether he wears cold-weather gloves, which prohibit a complete weapon inspection), then he and the new Soldier meet the retiring sentinel in front of the tomb and all three salute the unknowns.

‘Pass on your orders,’ the relief commander, who is the only Soldier entitled to wear rank insignia, directs the relieved sentinel, according to the tomb’s standard operating procedures.

The relieved sentinel then tells his replacement: ‘Post and orders remain as directed.’

‘Orders acknowledged,’ the new sentinel replies before beginning his patrol.

This ceremony is mostly for show, and only really occurs during the cemetery’s open hours. However, just because there’s nobody around at night when the cemetery is closed doesn’t mean the theatrics stop. Long after the gates to Arlington close, even in the wee hours of the morning, guards and sentinels never stop watching over the tomb and continue their walking along that 63 feet of rubber with incredible precision.

In accordance with tradition, nobody who guards the tomb wears anything that would denote rank, so that nobody outranks the unknowns. However, after a year of constant drills and training and if they’re able to pass a series of tests that demand nothing short of perfection, a trainee will be promoted to tomb guard and given a Tomb Guard Identification Badge. After receiving this badge, if they have served in this capacity for nine months without being removed from the post for some infraction, they are allowed to wear it for the rest of their military career and officially gain the title of “Sentinel” rather than just “Guard”; although if they ever stop achieving the rigorous standards set for one of these guards, they may be removed from this duty. The testing in this way never stops, nor does their training both for this ceremonial duty and keeping up with actual combat and tactical training, which generally takes place in their off time; you see, the Old Guard isn’t just in charge of these ceremonial posts, but also charged with protecting Washington D.C. and being the official escort to the President.