Why Don’t Humans Have as Much Hair as Other Primates? 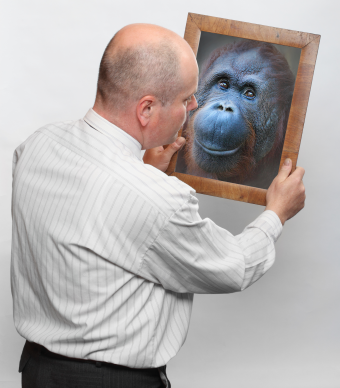 Although there is no definitive account of why we lost our body hair when every other primate is covered with the stuff, there are a handful of compelling theories that may explain our hairless condition.

One early explanation for why we, alone, are the only relatively “naked” apes was the aquatic ape hypothesis. First floated (pun intended) by a pathologist, Max Westenhöfer, in 1942, the idea became popular in the 1960s after it was adopted by marine biologist Alister Hardy, writer Elaine Morgan and zoologist Desmond Morris.

Essentially, the aquatic ape theory holds that during a brief period in our evolution our predecessors enjoyed a semi-aquatic existence (i.e., they lived near water and spent a great deal of time swimming, wading and diving for food). In support of the theory, they claim that we shed our hair (which would only be a drag in the water) and added, like other marine mammals, a layer of body fat. Compelling in its simplicity, the theory has been largely discredited, mostly because there is no evidence (such as in fossil record) to support it.

However, the study of human and lice genetics has produced evidence that, for whatever reason, our ancestor Homo erectus lost its hair while living in the African savanna about one million years ago. Given the location and climate, this has led some evolutionary biologists to opine that while “running around and sweating” in that hot climate, Homo erectus shed its heavy body hair in order to promote cooling by facilitating perspiration.

This theory has some holes, though, including that many species of monkeys that live in savannas today are very hairy, as well as the fact that, while less hair during the day would help keep a body cool, at night, it would be much more difficult to stay warm. Also detracting from this hypothesis is the fact that our nearest relative, the chimpanzee, also has less hair than it should for its size (including very little on its head), but rather than living on the hot savanna, it resides in cooler jungles.

A third popular theory is that we shed our thick hair making our bodies a less attractive home to creepy crawlers who like to feast on our blood (think lice, ticks and fleas) and spread disease. Beyond disease prevention, which is seemingly a great natural selection tool, over time, bare skin would also signal to potential partners that we have fewer parasites, which makes us more likely to be healthy, and therefore a better mate. Under this theory, bare skin was selected until it became the norm.

Another interesting hypothesis has to do with our relatively long childhood, in which we retain certain juvenile traits well past the age when other apes would have matured; under this theory, it’s thought that we simply never lose the juvenile hairlessness trait. Notably, the second-least hairy ape, the chimpanzee, like us matures slowly with females not reaching reproductive age until around age 13.

A fifth theory that is receiving more attention lately proposes that we lost our hair facilitating better communication – signaling by facets of our skin and expressions on our faces. As anthropologist Barbara King described it, “we humans possess a whole skin canvas.” Unlike many mammals, which can only see a limited range of colors such as blue, yellow and sometimes green, humans can see a much wider array; this is because humans have an extra cone in our retinas (trichromatic as compared to dichromatic) that allow us to also perceive colors in the red-green zone. Altogether, our third cone allows us to distinguish the pink of a blush, the yellow of jaundice and the purple of a bruise, all of which provide an evolutionary advantage.

Interestingly, other Old World primates also have trichromatic color vision, and, although not to the same extent, less hair, particularly on their faces, when compared with mammals and New World primates who are monochromatic or dichromatic.