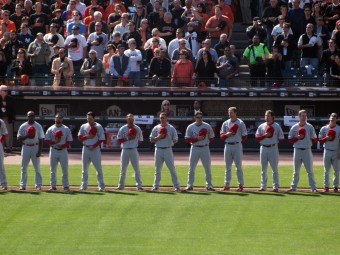 As Francis Scott Key sat aboard a ship, now officially a prisoner of war, he could only watch as the British bombarded American forces at Fort McHenry.  He had been sent to the British ship HMS Tonnant, along with John Stuart Skinner, by President James Madison himself to negotiate the release of prisoners of war.

After dining with British officers, it became painstakingly clear to both Key and Skinner that neither they, nor the POWs they came to rescue, were going to make it back to the American side anytime soon. The British were planning an attack on Fort McHenry and they did not want their visitors to report back to the enemy their position or strength.

The British allowed the Americans to return to their ship, but under guard, and Key was confided to a small cabin. Key watched the battle rage and “in dawn’s early light,” he saw victory… America’s flag was still there. It was then that he put pen to paper and wrote much of the poem that would become the “Star Spangled Banner,” finishing the rest at the Indian Queen Hotel after being released.

Key titled the poem “The Defense of Fort McHenry,” and showed it to his brother-in-law, a commander at Fort McHenry. He thought it fit perfectly with the medley of a popular drinking song of the time, “The Anacreontic Song.” The poem, with the new medley, was distributed to troops and appeared in the newspaper The Baltimore Patriot and shortly thereafter was re-titled the “Star Spangled Banner” by Thomas Carr who started selling the lyrics and sheet music for the song in his shop in Baltimore. Soon, it was printed in newspapers across the country, establishing its status as a wartime anthem.

The song continued to gain popularity, often being played at parades and Independence Day celebrations.  In 1889, the Secretary of the Navy Benjamin J. Tracy signed General Order #374, declaring it the official song to be played whenever the flag was raised. In 1916, President Woodrow Wilson ordered the “Star-Spangled Banner” be delivered during all military processions and occasions.

In the fall of 1918, America was in the depths of wartime – this time, World War I. World War I had begun four years earlier and after the bloody violent struggle, it finally seemed that America (and it’s allies) would be victorious. Patriotism during this time was at an all-time high.  Major sporting events particularly became venues for public displays of patriotism and unity, as they still are to some extent today.

The Star-Spangled Banner had been played during sporting events dating all the way back to the late 1800s, but the song cemented itself in the sporting world during the fall classic of America’s pastime… the 1918 World Series.

The 1918 World Series was significant for a number of reasons. It featured a matchup between the Chicago Cubs and the Boston Red Sox, two of the best teams of the era. Of course, after this World Series, neither of these teams would win a World Series for a combined 181 years.

The Red Sox had a star pitcher on their roster by the name of Babe Ruth, who, of course, turned out to be a better hitter than pitcher, which was saying something given his pitching skills. The war had forced the government to draft ball players into service during the summer and, under the “Work or Fight” order, baseball was told to end their season prior to Labor Day. Therefore, the 1918 World Series became the first (and to this day, only) to be played entirely in September. In addition, a bomb – the act of the anti-capitalist union “Industrial Workers of the World” — had blown up the Chicago Federal Building only days earlier, killing four and injuring thirty.

Game one of the series was played in Chicago. Some fans, due to fear and solemnness over the bombing, stayed away from the ballpark. Only 19,000 of the available 30,000 seats were filled. The ballpark was decked out in red, white, and blue, the Cubs’ brass trying everything to make fans forget the violence of war, both here and abroad.

As Babe Ruth pitched a masterpiece against their Cubbies, fans remained silent and subdued in their seats.  With the Sox leading one to nothing going into the bottom of the seventh inning, Chicago’s ownership had arranged for a military band to play the Star-Spangled Banner during the seventh inning stretch.

For the next two games in Chicago, the Cubs management had the military band again play the Star-Spangled Banner during the seventh inning stretch. The crowds were delighted and fans began showing up to the games, wanting to be part of the patriotic display. The World Series moved to Boston and the Red Sox brass, refusing to be outdone, moved the Banner to before the game and used it to welcome wounded veterans onto the the field who had received free tickets to the game. With that, a sports tradition was born.

The Red Sox would go on to the win the World Series four games to two and would not be victorious for another 86 years – until 2004. In 1931, President Herbert Hoover signed a law that declared that the Star-Spangled Banner would forever also be known as the National Anthem. But it was the fall of 1918 that the Star-Spangled Banner and America’s pastime became forever linked.