The Legendary Toilets of Singapore and the Flushing Law 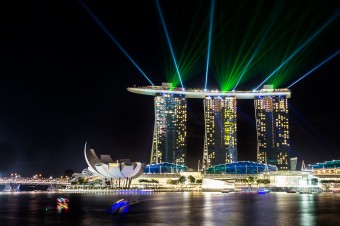 Over the years the city of Singapore has been described by many as one of the cleanest on Earth with roads and toilets being “clean enough to eat off“, which is perhaps to be expected from a city where it’s illegal not to flush a public toilet.

The reason why toilets in Singapore are so insanely clean can be traced back to the work of Lee Kuan Yew, Singapore’s first and arguably most popular prime minister. Kuan Yew rose to power in 1959 and continued to serve as Singapore’s leader for 31 years until he decided to step down in 1990. When Singapore became an independent nation in 1965, Kuan Yew is noted as being instrumental to the the small city-state being able to so quickly transform itself from being a “poor port from the bottom rungs of the third world” to being one of the most profitable and prosperous economies on the planet.

Kuan Yew accomplished this through a series of reforms aimed at making the country an overall nicer place to live including:

By far Kuan Yew’s most infamous policies though were his incredibly strict rules in regards to public cleanliness, most if not all of which carry hefty fines if you’re caught breaking them. For example, not flushing a public toilet is considered a crime in Singapore and if you’re caught flouting it, you will be given an on the spot fine of about 150 dollars, more if you’re a repeat offender. Likewise, littering carries an equally heavy fine of about 300 dollars or more, depending on the size of the item. Smaller items like candy wrappers usually incur a lesser fine, whilst things like soda cans can net you a trip to court and even a caning if you’re caught.

Kuan Yew’s biggest bugbear, however, was chewing gum; he hated it with such a passion that since the 1990s, gum has been outright banned in the country. This was later (partially) repealed in 2004 and gum is now okay to be brought into the country in small quantities and dentists are allowed to prescribe it for certain medical conditions.

While this may seem a tad extreme, Kuan Yew’s annoyance with gum chewing wasn’t without precedent. You see, prior to the ban in 1992, the government was spending upwards of 150,000 dollars a year to clean it up and vandals were using it to disrupt the sensors on the country’s newly built subway trains, stopping their doors from shutting and in the process causing huge delays. After the ban, cases of such gum littering plummeted and the associated costs of cleaning it up dropped to negligible levels.

If you’re wondering how exactly Singapore enforces these dozens of laws, it’s mostly accomplished using hundreds of undercover police officers who have the power to issue on the spot fines to anyone seen flouting them. Officers are known to check toilets after they’ve been used and even install security cameras if they receive multiple complaints on a particular toilet, to catch offenders in the act.

Perhaps our favourite Singapore cleanliness fact is that many of Singapore’s elevators have “Urine Detection Devices” which will lock the doors of an elevator and summon the police to your location to arrest you if it detects that you’re relieving yourself in one.

All of this may seem excessive, but the results really speak for themselves; today, Singapore is largely considered one of the world’s leading economies and the city itself is one of the most industrious, safe, clean, nicest to live and richest on Earth. In fact, Singapore is currently enjoying 16 consecutive years on the top spot of the “world’s most livable cities“, and is also generally considered the world’s best city for businesses. Not bad for a place that was up until about 50 years ago or so described as a “swampy land mass“.