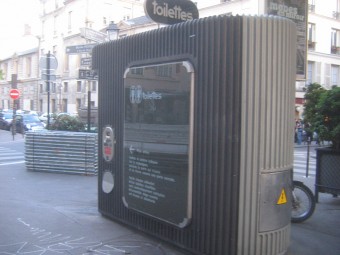 Today I found out many public toilets used to be pay as you use. Or, for those of you like me who’ve been around for more than a few decades, “Today I found out what happened to pay toilets.”

Going to the bathroom might be the one and only activity in America that’s cheaper than it used to be.  Pay toilets used to be the rule in airports, bus, and train stations, and one would also often encounter them in gas stations and restaurants.

The earliest pay toilets in history were erected in Ancient Rome in 74 AD- during the rule of Vespasian, after a civil war greatly affected the Roman financial scene.  Vespasian’s initiative was derided by his opponents, but his reply to them became famous: “Pecunia non olet”  (“Money does not smell”)…  Wise words.

Fast-forward to the United States in 1935, Walt Disney opened “Walt’s”, a popular cafe on Hollywood Blvd., and the first restaurant ever run by an animation studio.  In 1936, “Walt’s” also became the first establishment in North America to install pay toilets.  Pay toilets spread across America and were soon common sights in almost all the major cities.

Pay toilets were never meant to be a profit-making enterprise, but merely something to help defray the costs in cleaning and supplying the bathrooms.  It was presumed that the dime or quarter “entrance fee” would motivate users to keep the pay stalls cleaner.

That theory didn’t work though, for instead of encouraging users to exercise best behavior, bathrooms with pay toilets were often trashed by angry patrons.  Later, many of the coin boxes in pay toilets were broken into and the money was stolen.

Most pay toilets in the 1950s and 1960s were operated by municipalities.  But the small amount of revenue generated by pay toilets in airports simply was not worth the attendant hassles; the numerous complaints about their presence; and the constantly broken locks that rendered the toilets unusable.

Another pay toilet complaint was the “no paper” argument.  What if you shelled out your dime or quarter and discovered no T.P. in your stall?  This wasn’t exactly an uncommon occurrence for those of us who remember using these.

The real death knell for pay toilets came after several lawsuits were filed against the municipalities by women’s groups.  Pay toilets were sexually discriminatory, they claimed, because women, unlike men, were forced to pay to urinate (urinals weren’t pay as you use on account of the lack of doors to stop people from using them and the fact that there wasn’t much in the way of cost to defray with urinals, unlike when people are defecating).  Even the most anti-feminist male chauvinists could see their point on this one.

In addition to the above lawsuits, a group of homeless people actually filed a class-action lawsuit in New York to end pay toilets.  “The fact that I can’t find any place to relieve myself in New York causes me lots of problems and pain”, testified a New York homeless man.

Now with both the homeless and feminist groups lobbying against them, and people in general hating them, in 1973, Chicago became the first city to ban pay toilets.   New York state followed and outlawed them in 1975.  Many of the big cities in America joined the crowd and started banning pay toilets.  By the end of the 1970s pay toilets became virtually obsolete in the United States.  Although long gone in most parts of America, pay toilets still survive and flourish in many corners of the world, such as France, Sweden, Germany, Colombia, and Singapore.