June 11, 2015 Melissa
Dan K. asks: Why is it that other people’s farts smell worse than your own? 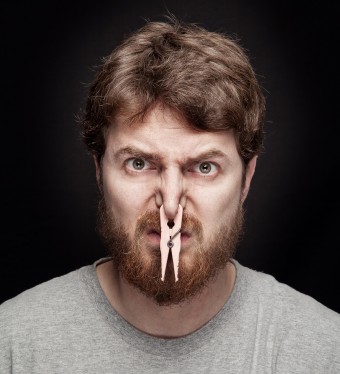 In 2005, two researchers published a series of articles investigating the subject of other people’s smelliness. They examined how much disgust people would feel and show after smelling a variety of odors, including armpits, garbage and farts. Among the stinks examined, farts elicited the strongest negative response, and across all body odors, people consistently rated odors of other people worse than their own (with one notable exception in that the armpit sweat of one’s partner was generally rated as less offensive than a person’s own. For why this might be the case, see: Why Do We Still Have Pubic and Armpit Hair)

This all leaves us with the question of why other people’s farts smell worse.

Probably the leading reason your own farts aren’t generally as offensive to your nose is that you’re used to your own smell.  The more you’re used to something, like a smell, the more likely you are to, if not prefer it, at least to partially tune it out consciously, making it less extreme to your senses.  As you’re smelling yourself all day, every day, your brain tunes out some of the smells emanating from your pores, the surface of your skin, and the air expelled from your lungs, all creating a somewhat unique blend of odors largely resulting from various microbes that call your body home and, of course, what you eat. (Note: on average there are about 10 times more bacterial cells in your guts alone than human cells that make up your whole body.)

For example, if you eat a lot of garlic, even if you brush your teeth and rinse with mouthwash directly after, you’re still likely to smell a bit to others who aren’t eating garlic, but not so much to yourself.  This is because some of the sulfuric compounds in the garlic get metabolized and make their way into your blood stream.  Once they’re in your blood, they eventually get passed out of your body through various bodily excretions, which includes being exuded through your pores and also passed into the air that fills your lungs.

So not only does your whole body smell like you’re wearing a stinky perfume, but, as you breathe, the air goes into your lungs and is contaminated by the allyl methyl sulfide; this in turn causes your breath to continue to smell even though you’ve cleaned your mouth out. Of course, you are typically unaware of any of this, as your brain quickly tunes out the odor emanating from yourself. The same type of thing is happening, albeit to a much lesser extent, with some of the odors that make up your farts.

It has also been proposed that there is probably some level of your brain tuning the smell of your farts out for another reason- it expects a potentially strong smell directly after it knows you just farted.  While this may seem farfetched, it turns out your brain does stuff like this all the time.  For instance, have you ever noticed that you can’t tickle yourself? (Well, most people can’t anyway.)  This is because your brain anticipates things going on around you in order to help speed up response times, among other reasons.

In the case of touch, more technically, the cerebellum monitors body movements and can also distinguish between expected sensations and unexpected ones, generally resulting in diminishing or completely discarding expected sensations, while paying much more attention to unexpected ones. For instance, when you are typing on a keyboard, your brain significantly dulls the touch sensation in your fingertips so that you don’t really notice it unless you consciously think about it. This same type of thing happens when you try to tickle yourself.

Researchers at University College London tested this by scanning the brains of subjects while the palms of their hands were touched by themselves and by experimenters. The brain scans revealed that when the touch was externally produced, the somatosensory cortex (involved in processing touch) and anterior cingulate cortex parts of the brain reacted much more strongly than when the touch was produced by the subjects themselves. In these latter cases, the brain was using information it has on hand such as motor movements of the finger and arms to anticipate the touch.

In the extreme case, like when someone sneaks up behind you and starts tickling your neck, the sensation can be extremely strong, possibly even resulting in you jumping out of your chair and slapping the back of your neck before you really even consciously register the touch. This is a good thing.  You see, it turns out the panic response when a tarantula is crawling on your leg or the like is exactly what is happening in your brain and body when you are getting tickled.  The body’s response to being tickled is panic and anxiety.  It is thought that this is a defense mechanism for exactly this type of thing where an external touch, such as a venomous insect crawling on you or the like, might be occurring.  The body needs to react quickly to this unanticipated touch and without time for much conscious thought, so produces the panic reaction. (Interestingly, the panic reaction that results from tickling doesn’t feel like tickling when the person tickling you isn’t someone you want to be doing this.  In this case, it more closely resembles actual panic reactions, rather than having associated laughter.)

In any event, the same exact thing is thought to be happening with farts.  Your brain knows you just farted, so at least partially tunes out the smell.

That said, when another person farts and you definitely know they just did before the smell hits you, it still seems to smell worse.  While it’s not wholly understood why this is the case, it’s generally thought that there are two factors at play.  First, there may be an element of confirmation bias going on here.  Essentially, you remember the really stinky farts from other people, but not so much the numerous farts you take a whiff of daily that don’t really smell at all (whether you knew the person farted or not).

Second, we return to the aforementioned fact that your brain isn’t tuning out foreign smells necessarily like it does your own, as well as the fact that our brains, for whatever reason, seem geared to react more strongly to negative smelling odors from others, even if the fart in question contains more or less the same levels of noxious fumes as your own.

There are important evolutionary reasons why this is the case, even if the mechanism isn’t wholly understood. For instance, it is entirely possibly for you to become infected with a disease from smelling another person’s fart. This isn’t so common anymore now that most humans tend to walk around wearing underwear and other garments on top of that, filtering your rear expulsions a bit.  But, much like certain viruses and the like can be transmitted via coughs, pathogens like streptococcus pyogenes can be transmitted to you via an improperly filtered fart where the poop particles are peregrinating through the air, perhaps ultimately ending up in your nose, throat or lungs.  Your brain is seemingly built to be keenly aware of this danger and so goes ahead and reacts more negatively to said odoriferous odor from an external source, just in case, motivating you to want to leave the stinky zone or at least hold your breath for a bit while the air clears out.