March 9, 2015 Melissa
Geoff G. asks: Can toilet seat covers they have in public restrooms stop you from getting an STD from toilet seats someone who had one sat on? 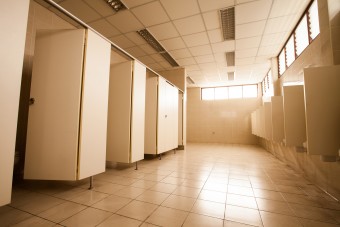 Flimsy white sheets shaped like the seat, paper toilet liners can be found in many public bathrooms. Notably, however, while they may provide reassurance to the germaphobic and finicky, toilet seat covers have little else to offer in terms of decreasing your odds of being infected with some pathogen when sitting on the toilet seat.

Once thought to be capable of conducting sexually transmitted diseases (STDs), contrary to popular belief, today scientists know that toilet seats are very poor vehicles for spreading such maladies (like herpes and HIV). This is due to the relative fragility of these viruses outside of a human host, as well as the very effective protective barrier offered by the skin of your backside. (Note, however, that if you have an open cut or other wound on your derriere, it is possible one of these viruses could get through in that scenario.)

Of course, this doesn’t mean that viruses and bacteria aren’t sometimes present on toilet seats, and, in fact, an eight-year old girl once caught gonorrhea (Neisseria gonorrhoeae) from one; however, she didn’t get it by sitting on the seat, she picked it up when she tried to use toilet paper to clean the soiled seat off and got the microbes on her hand.

In addition to a few, short-lived STDs, toilet seats may have germs like E. coli and streptococcus; however, neither of these can typically invade a body through the skin, so the only way they will make you sick is if they get on your hands and you don’t then wash your hands before eating or the like.

Nonetheless, some people have very sensitive skin and seats covered with certain allergy triggers like chemical cleaners, paints, or varnishes may cause contact dermatitis, a condition seat covers would help prevent. In addition, the truly fastidious would find themselves in a difficult position if toilet seat liners weren’t available.  For the biggest germaphobes, toilet paper strategically placed on top of the toilet seat liner may also ease your mind, albeit not actually accomplishing much in terms of disease prevention over what your skin already offers.  Of course, when a toilet containing fecal matter is flushed, it tends to result in microbes and bits of said matter being sprayed about, including landing on that latch handle you touched, exposed bits of toilet paper and, yes, the exposed part of the disposable toilet seat liners…

It could be worse, though. In Ancient Rome, a wet sponge on a stick was often used for wiping.  That may sound very comfortable and appealing until you learn that, after being used, the sponge was placed back in a tub of salt water to await the next person to come along and wipe with it.  Even if the salt content was sufficiently strong to kill off any microbes. Ewww.