Why Your Lap is Called That 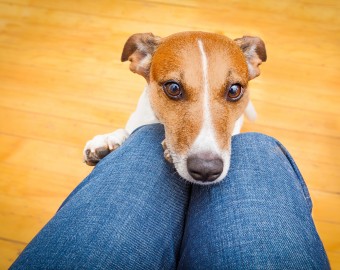 Used as a noun, verb and adjective, most with several distinct meanings, lap is a prominent word in the English language.

One of its most common meanings denotes the upper part of the legs when seated. Derived from a Proto-Germanic word *lapp, meaning the “skirt or flap of a garment,” or as the OED notes, “A part (of a garment or the like) either hanging down or projecting so as to admit of being folded over.” (Think toga, or the front of a robe.) This ultimately derived from the Proto-Indo-Eurpoean root “*leb”, meaning “be loose, hang down.”

This was later incorporated by a variety of early languages, including Old Saxon and Old High German (lappa), Middle Dutch and Dutch (lappe and lap), and, of course, Old English (læppa).

The first known instance of “lap” meaning the top of the space between your hips and your knees when seated occurred in 1275 in Layamon, The Brut:

And then more notably in the prologue of Chaucer’s Canterbury Tales in the late 14th century, “His walet lay biforn hym in his lappe.”

A second popular meaning, to pull up liquid with the tongue, also dates back to Old English (500-1150 AD) with the word lapian, first documented around the year 1000.

If you’re wondering about the sense of a trip around a track or the like, in the mid-1600s, one meaning of lap was something coiled up. By the mid-1800s, this morphed into “laps” of a track.