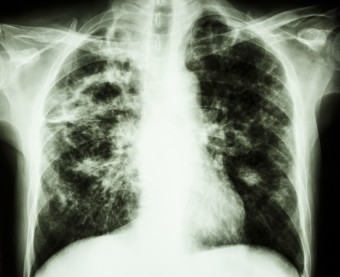 Originally, of course, nobody knew what caused the various forms of tuberculosis, and they certainly didn’t understand it was caused by what would eventually be called tubercle bacillus (usually the offending microbes are specifically Mycobacterium tuberculosis).

The word “tuberculosis” was coined by Johann Lukas Schönle in 1839, from the Latin “tuberculum,” meaning “small, swelling bump or pimple.” However, it wouldn’t be until 1882 when Dr. Robert Koch discovered the tubercle bacillus, for which he won a Nobel Prize in 1905, that the name “tuberculosis” began being exclusively used to refer to the disease formerly popularly known as consumption.

The microbes that cause the disease have been around for at least 15,000-20,000 years with known human deaths being caused by the bacteria dating back at least as far as 5,000 years ago, so the current name is an extremely recent moniker relative to how long the disease has been around.

The much older name originally came from the ancient Greeks who called the disease something meaning “consumption,” “phthisis,” specifically referring to pulmonary tuberculosis, with the earliest references to this being in 460 BC.

The “father of Western medicine,” Hippocrates, estimated that phthisis was the most widespread disease of his age. He further told his students that they shouldn’t attempt to treat patients in the last stages of phthisis, as they were sure to die and it would ruin his protégés’ reputation as healers if they made a practice of attempting to heal such individuals.

Tuberculosis wasn’t just found across the pond either, but it is known to have been present in the Americas as early as 100 AD.

So why was “phthisis” aka “consumption” chosen for the name? It was because the disease seemed to consume the individual, with their weight drastically dropping as the disease progressed.