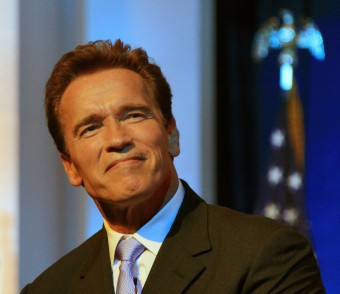 Given that he’s mostly famous for playing a “more brawn than brains”, emotionless robot who speaks in fractured English (both in politics and on the big screen…), Arnold Schwarzenegger isn’t exactly thought of by the general public as a very shrewd, intelligent, and calculating businessman. But, it turns out, Arnold was (and is) just that; through a heck of a lot of hard work and savvy business dealings becoming a self-made millionaire long before he ever made it big in Hollywood, and doing this at an age when most of us still center our lives around binge drinking with our friends and generally trying not to think about all the student loans we’re presently accumulating.

Though the exact circumstances under which Schwarzenegger grew up have been subject to embellishment over the years, it is definitively known that he was born in the tiny Austrian village of Thal in 1947 into a household that has been variously described as having neither hot water nor electricity. Exactly how true this is, is up for debate but one thing that is abundantly clear is that Schwarzenegger grew up in a home of incredibly modest means. For instance, in his own words:

We had no flushing toilet. No refrigerator. No Television. What we did have was food rations — and we did have British tanks around to give us kids the occasional lift to the elementary school.

A popular anecdote Schwarzenegger likes to tell from his youth is about the time his family bought a refrigerator, prompting them to stand around it in awe taking turns opening and closing it to feel the brush of cold air against their hands and faces. Yes, as a kid, Arnold Schwarzenegger was more impressed by a refrigerator than a tank, which maybe says a lot about his childhood.

In his youth, Schwarzenegger was known to have displayed an uncanny affinity for physical fitness and as a result, threw himself into and excelled at a number of sports including but not limited to soccer, gymnastics, boxing and swimming. However, it was during an impromptu trip to the gym at age 13 that Schwarzenegger’s life was changed forever. His soccer coach at the time had taken him to the gym so that he could work with the rest of the team to strengthen their legs, but Schwarzenegger, who’d never seen bodybuilders before, was incredibly intrigued by the physique and power of the men working out there.

He began weight training in earnest at about age 14 and was reportedly so dedicated to the craft that he’d break into his local gym on the weekends so that he could get in extra workouts. Schwarzenegger began competing in body building competitions shortly thereafter, placing as a runner up in the Steirer Hof Competition in Graz, Austria in 1963. His first victory came just 2 years later in 1965 when he was crowned Junior Mr. Europe, a victory that famously cost him a week in military prison.

You see, at the time of the Junior Mr. Europe competition, Schwarzenegger was right in the middle of fulfilling his mandatory year of military service for the Austrian government. Unwilling to miss the competition, he went AWOL to compete.

After fulfilling his obligation to the military, he once again threw himself into body building and spurred by his victory the previous year was able to secure himself the prestigious title of “Best-Built Athlete of Europe” in 1966.

He then was able to parlay this victory into an offer to compete in London for the title of Mr. Universe, a competition he would eventually come to win four times, starting with a historic win at age 20. He also won the equally distinguished title of Mr. Olympia an astounding seven times along with a multitude of other titles and bodybuilding honors throughout his lifetime.

You might be thinking at this point that it was all of these wins that made him rich. In some sense, that’s true, but not directly.

What Arnold did do with his winnings up to this point was shrewdly save and invest them so that by the time he arrived in the states in 1968 at age 21, he had about $27,000 to his name. One such investment was a gym in Munich that Schwarzenegger was able to turn into a success by using his body building celebrity to advertise it. He similarly used his status as one of the foremost body builders in Europe to start a mail order company, through which he sold various pieces of exercise equipment, supplements and leaflets to the public, something he was inspired to do after many fans wrote to him asking for tips on working out and he realised that they’d probably pay to hear the answer. Funny enough, unlike many similar services offered by other body builders, Schwarzenegger was particularly successful at this because he didn’t just take the money and send nothing or at least nothing of value; he actually delivered useful product and advice to those who sent him money.

Upon arriving in the United States, Schwarzenegger quickly set about putting his modest amount of money to work; once again investing it in a mail order business which he would later note was much easier in the U.S. than in Europe since it only required paying “$3.75 for a permit“.

To help make ends meet during his first few tentative years in America and also to help keep his physique in tip-top condition, he also started a brick laying company with fellow bodybuilder Franco Columbu. Although the pair offered rock bottom prices and the chance to have the work done by a man who was literally crowned the perfect specimen of manliness four years running, few people ended up actually hiring the pair. That was until Schwarzenegger and Columbu doubled their prices and started telling people that they were “speciality European bricklayers“, at which point they became inundated with work.

So up to this point he was managing to make a decent living, but we implied earlier that he became a millionaire in his 20’s.  So how’d he go from middle class to the 1% so rapidly? In a word (or two in this case): real estate.

After heavily researching the market, he started with a down payment on an apartment complex worth $214,000, which he was able to quickly flip for a cool $360,000, netting him a $146,000 profit just a year after buying it. Rather than blowing it all as most early 20’s males might be inclined to do, he doubled down, reinvesting the profits back into another building. Once again, his investment proved a wise one, with him selling it for a tidy profit a short while after buying it. Each time, rather than spending the money on cars, alcohol, women, etc. as most early 20’s males with his physique might have been tempted to do, he simply rinsed and repeated, one upping his investment every time. A few years later, he was a millionaire.

If you’re wondering how a once poor bodybuilder from Austria with a tenuous grasp of English was able to display such an incredible level of business acumen, one of the first things Schwarzenegger did when he arrived in the states was enroll himself in Santa Monica college and begin taking English and business classes. Add a good amount of brain power and using the discipline he no doubt learned from years of making his body into the best impression of the mythical Hercules possible, by his mid-20s he had achieved the American dream.

So by the time 35 year old Arnold Schwarzenegger was busy becoming a household name with his first Hollywood blockbuster in the 1982, Conan the Barbarian, he’d already been a millionaire for almost a decade and had continued his savvy investing and career as a body builder in the interim. Later, of course, he’d also become the Governor of the great state of California, and even has aspirations for running for President, despite the legal hurdle of not being a natural-born citizen. Not bad for a person whose major highlight to his childhood was opening and closing a refrigerator.