The Legend of the Green Man 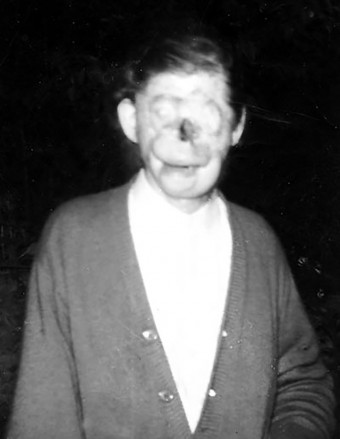 According to legend passed down by residents in Western Pennsylvania, you can spot a mysterious “Green Man” walking alongside the road late at night or in a local tunnel where his touch will disrupt a car’s electrical systems. His trademark disfigured face and glowing green skin are said to be the result of an electrical accident. One version of the story says he was struck by lightning, and another claims he worked on the railroad as a laborer until an electrical accident killed him.

While sometimes urban legends are based on nothing but complete fiction, occasionally there is a kernel of truth to the stories, albeit with more fantastical details added over the years. This is one of the latter. You see, the legend of the Green Man, also known as “Charlie No Face,” is based on a real person who suffered a horrific accident as a child.

Raymond Robinson was born on October 29, 1910. He had a normal childhood until he was eight years old. It was then that Ray decided to make a fateful climb in June of 1919. Ray and his friends were out playing when they noticed a bird’s nest on a railroad bridge spanning Wallace Run in Big Beaver, Pennsylvania. There are conflicting accounts on whether Ray was dared to climb up to see if there were any birds in the nest or not.  According to the Beaver Falls Evening Tribune, it was Ray who instigated the challenge, with his friends chickening out.

You see, in September the year before, a twelve year old boy, Robert Littell, had also climbed around on the bridge and was killed after coming in contact with one of the electrical lines on the structure. Ray and his friends reportedly knew of the accident, but he decided to risk it anyway.

When Ray scrambled up to check in the bird’s nest, he touched one of the electric lines, though which isn’t clear.  According to Bill Fronczek, who researched the Harmony Line for the Pennsylvania Trolley Museum, the main transmission line in question carried approximately 22,000 volts of AC electricity. There was also a second line that powered the Ellwood City/Beaver Falls daily trolley that carried approximately 1,200 volts DC.

Whichever line he touched, Ray ended up with severe burns on his upper chest, lost both of his eyes, part of an ear, his nose, and an arm below the elbow, as well as had the area around his mouth severely disfigured. Unlike Robert Littell, though, Ray survived his injuries in spite of the doctors’ and local newspapers’ predictions that he would die.

Remarkably, just two months after the accident, not only was he alive and relatively well, the Daily Times reported on August 16, 1919, “In spite of all his affliction, the boy is in good humor.” This is something that became a defining personality trait, even into adulthood.  As one of his nephews later stated in an interview, “He never complained about anything.”

Ray returned home after a lengthy stay at the hospital. His family cared for him, and the boy grew to be a man. As an adult, he enjoyed sitting for hours listening to the radio to pass the time. For money, he made door mats and leather goods, such as wallets and belts, to sell. Apart from doing chores like mowing the lawn (something he reportedly did reasonably well considering his lack of eyes), going out in public during the day was something he generally avoided.

A prosthetic nose attached to a pair of glasses helped give him a semblance of a normal appearance, but Ray still attracted a lot of, sometimes negative, attention whenever he went out. But he still enjoyed walking wooded hiking trails, keeping one foot on the path and one off to find his way, and using a walking stick to make sure he didn’t run into anything.

Eventually a coal company destroyed the trail near his house, so when the weather was favorable, Ray developed a habit of walking Route 351 between Koppel and New Galilee, PA at night. This was much to the chagrin of his mother, Louise Robinson, and family as he often stayed out well past midnight. Walking at night without light wasn’t any trouble, of course, because for him the world was always dark. To find his way, similar to the wooded trails, he would keep one foot on the road and one foot off.

The legend of the “Green Man” began circulating around the 1950s when drivers spotted Ray during his walks along the side of the road. Locals believe the name “Green Man” originated from the green shirts Ray reportedly occasionally wore out on his walks. However, it should be noted that locals more commonly called him “Charlie No Face.” It was those from outlying areas that called him “Green Man.”

As his legend grew, teenagers and other thrill-seekers began setting out at night to find the so-called Green Man. As a result, and the fact that some seeking him out were none-to-kind when they found him, Ray often hid in the bushes and trees alongside the road if he heard a car coming. But not always.

He occasionally agreed to let passersby take his picture in exchange for cigarettes or beer. (A fact his family did not appreciate, as he would sometimes get drunk from this and get lost, with it not generally being easy to find him if he wandered away from the road.)

He even chatted with people who took the time to get to know him. His family thought this might be the reason he seemed to enjoy the late night walks so much, being a fairly lonely person. More than a few people noted Ray’s kindness. Late former resident John Maranciak told an interviewer of his experience coming across Ray.

He wouldn’t come out for everybody… When you saw him on the road, he used to hide behind trees… Once he got to know you, he’d come over to you. He’d talk about the weather, how hot it was, things like that. We never asked about his disability, and he never brought it up.

Ray’s nighttime walks became fewer and far between as he aged. Then they stopped completely in the 1980s when he moved into the Beaver County Geriatric Center. He died there of natural causes at the age of 74, on June 11, 1985.