Did Unicorns Ever Exist? 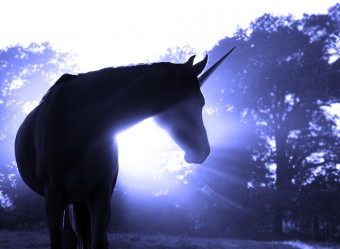 On November 30, 2012, the Korean Central News Agency, North Korea’s government “news” agency, reported that scientists had “reconfirmed” the existence and location of the final resting place of the unicorn ridden by King Dongmyeong, the founding father of Goguryeo of an ancient Korean kingdom. The unicorn’s grave was located under a rock near the North Korea capital of Pyongyang with an engraving that read “Unicorn’s Lair.”

Like many supposed news reports that comes out of North Korea these days, this reported evidence that a mythical creature like the unicorn once existed was mostly ignored and laughed at by the world’s science community. After all, this was the same news agency that reported former leader Kim Jong Il invented the hamburger and had eleven hole-in-ones the first time he ever hit the links. (What, he wasn’t good enough to get 18 hole-in-ones?) So, it’s fair for this outrageous claim to be taken as such. But unicorns have been discussed and given mythical status for centuries now, in religious texts, travel observations, and even ancient academic papers. Did unicorns, at one point, actually exist? If they didn’t, then where did the legend of this magical horse with one horn come from?

For the uninitiated, unicorns are mythical creatures that possess a single horn protruding from it’s forehead. Legends vary on exactly what powers the unicorn held. Some say it could fly, others said their horns possessed incredible healing power, and still others said that unicorns were immortal.

The first known depiction of a one-horned “unicorn” is commonly said to be found in the ancient Lascaux Caves in France. The drawings date back to 15,000 BCE. In actuality, the creature on the cave walls had two horns, but the original discovers got confused due to the close approximation of the horns in the drawing. More likely, the drawing depicts some sort of bull or antelope.

The first written account of a unicorn in Western literature comes from the Greek doctor Ctesias in the 4th century BCE. While traveling through Persia (modern-day Iran), he heard tales of a single-horned “wild ass” roaming the eastern part of the world from fellow travelers. In his writings (obtained from Odell Shepard’s 1930 research manuel “Lore of the Unicorn”), Ctesias described these creatures as “large as horses” with white bodies, red heads, and blue eyes. Ctesias depicted the horn as multi-colored and about a foot and half in length.

They were so swift and powerful, claimed Ctesias, that “no creature, neither the horse or any other, could overtake it.” According to Time Magazine’s article “A Brief History of Unicorns,” it was likely Ctesias never saw this creature himself, but rather combined the portrayals told to him by his foreign friends. Other well-known figures throughout history reported their own unicorn sightings, including Marco Polo (calling them “ugly brutes”), Genghis Khan (who supposedly decided to not invade India upon seeing the creature), and Pliny the Elder.

According to many scientists, what these people saw (or, in Ctesias’s case, what was described to him) may actually have been a rhinoceros. The Indian rhinoceros fits many of the descriptions recorded when those encountered a unicorn – the one horn, the powerful nature, and even Polo calling them “ugly brutes.” While rhinos and horses do not look much alike, horses were a well-known quantity back home. People knew what were horses were. It was quite believable and gives a vague image of what the animal looked like, similar to how Koala’s got the “bear” tacked onto their name and were also at one point called “monkey bears”. In fact, this theory is so widely-held, the scientific name of the Indian rhino is rhinoceros unicornis.

This may be a case of simple mistranslation. In the Hebrew Bible (the Torah), there are references to a creature known as “re’em.” Scholars believe “re’em” were a now-extinct type of wild ox or, potentially, the now endangered but still existing, Arabian oryx. At no point does the Torah make any reference to this animal being one horned, though there is Mestompian art that depicts these animals’ profiles in which only one horn is visible. When the Old Testament was translated to Greek, these creatures took on the word “monokeros” meaning one-horned, due to the writers being familiar with the artwork than the actual transcripts. In the Latin Bible, this became “unicornos” and then, into the English translation, “unicorn.” Like a crazy game of telephone, a wild ox or Arabian oryx became a mythical one-horned flying horse.

Unicorn believers also use the existence of the narwhal as further proof that their beloved creature once roamed the Earth. The narwhal is a member of the whale and porpoise family and owns a single horn – actually, it’s a tooth – located in the middle of it’s forehead. The tooth is used during mating and to create holes in the ice of the cold waters of the Canadian Arctic and Greenland they often live in. These unicorn supporters speculate that unicorns, being threaten on land by hunters and those wishing to do them harm, took the the sea and evolved into the narwhal. However, narwhals, in fact, are actually much closer to beluga whales, dolphins, and porpoises than horses in terms of DNA.

All of this evidence seems to point to that unicorns, at least in the form we traditionally think of, never actually existing. More likely, Indian rhinos, now-extinct wild ox, and Arabian oryx were combined to form the myth of the unicorn. Though, if you still think the unicorn is real, there is a place for you: Lake Superior State University in Sault Ste. Marie, Michigan. In 1971, the college created “the Unicorn Hunters,” a group dedicated to the staking out and hunting of these mythical creatures. Though the group disbanded in 1987, you can still apply for a Unicorn Questing license on the university’s website.