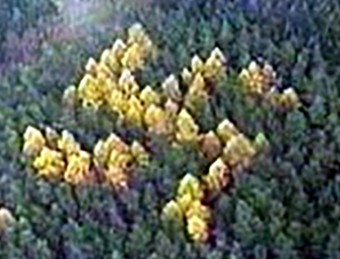 Being an intern at a German landscaping company during 1992 meant Ökoland Dederow was handed the tedious task of looking through aerial photographs for irrigation lines in a forest located in East Germany. During the course of this, Dederow came across something that definitely was not an irrigation line in photo 106/88. Approximately 140 larch trees in the middle of forest of green pine trees had turned brown in the autumn, forming a large swastika. He immediately showed the picture to his boss, Günter Reschke, who chartered a plane to take him over the section of forest and saw the symbol with his own eyes.

The forest swastika in Brandenburg, Germany most likely had been around since the 1930s, based on estimates of the age of the trees. Why did it take more than a half a century for anyone to discover it? One factor was that the larch trees only changed color, making the swastika visible, for a short period of time in the fall. The other factor was that the symbol can only be seen from the air and private planes were for a time banned from flying over the region. Any commercial planes flying over the area would have been too high for the passengers or pilots to see this.

No one knows who bears responsibility for the forest swastika in Brandenburg. A number of rumors surfaced shortly after Dederow discovered the symbol. One possible explanation places the blame on nearby villagers. One of their own was caught listening to a BBC radio broadcast in secret and ultimately sent to the Sachsenhausen concentration camp for this act. The story goes that the villagers then planted the trees in the shape of a swastika to show their loyalty to the Nazi Party. One more version claims the planting occurred in honor of Hitler’s birthday when a local Nazi leader ordered it done. Alternatively, a newspaper, the Berliner Zeitung, wrote that the Reich Labor Service constructed a road in a nearby village and the trees were planted in gratitude for this road.

Whoever really planted it, the forest swastika in Brandenburg is not the only one discovered in Germany after World War II. National Socialist foresters commonly created swastikas via planting trees during the Nazi regime, many of which have only been discovered relatively recently. For instance, in the 1970s, United States soldiers in Hesse discovered such a swastika and the numbers “1933” on a hillside. Another such swastika was discovered in Hesse during the 1980s, and a backwards swastika constructed of Douglas firs was found in Wiesbaden in 2000.

Three years after Dederow discovered the Brandenburg swastika, in 1995, the local German officials took action. Foresters armed with chainsaws cut down forty of the larch trees and reported back to their superiors that the symbol was no longer recognizable. However, a picture published in 2000 showed the foresters had been wrong. Those larches that remained after they cut others down filled in the spots left open, allowing the trees to still form the symbol, albeit slightly frayed, when they changed to yellow and then brown.

Officials in Brandenburg worried that if the swastika remained in the forest, it would become a pilgrimage site for Neo-Nazis. They also wanted to avoid a situation where the stumps were left behind and continued to show a swastika-shaped outline between the trees. To get around these issues, they planned to remove all the trees in that section of the forest, but ran into legal issues in doing so as the ownership of some of the land was in dispute. In the end, the Bodenverwertungs- und -verwaltungs GmbH (BVVG), the federal entity in charge of property management, only granted a permit to cut down twenty-five of the remaining trees.

Foresters again headed to the tree swastika on December 4, 2000; they strategically marked and cut down twenty-five trees ensuring the swastika would no longer appear from the air.

This all might have you wondering how the Nazis came up with the swastika in the first place. It turns out, the Nazis weren’t the first to use this symbol prominently.  The first known record of this symbol popping up was over 12,000 years ago in the region of present day Ukraine, with a version of the swastika carved into a tusk of a mammoth.

As we traverse through history, we find the swastika, or some version of it, was prevalent pretty much all over the world in a remarkable number of cultures- from the Navajo and Hopi Native Americans (among others) to the Celts, the Jews, the early Christians, the Indus Valley Civilization, the ancient Greek and Romans, the Egyptians, etc.

How is this possible? Some of it can be explained by cultural diffusion. Beyond that, it has been theorized that the swastika shape would necessarily be something any society that weaves baskets would be familiar with as, when weaving baskets via a square weave, this basic shape is readily apparent.

An alternative possible origin was put forth by Carl Sagan in 1985.  He noted in his book, Comet, when studying a Chinese text from the Han dynasty (second century BC) that included drawn comet tails, one of the depictions showed a comet with a tail that had four bent arms, strongly resembling a swastika.  Sagan theorized that a comet, or comets over time, could have approached so close to the Earth that the jets of gas streaming from the spinning comet(s), could form these arms, making the swastika shape in the sky and thus leading to the adoption of the swastika as a symbol of importance across the world almost literally overnight.

So why did the Nazi’s use the swastika?  Heinrich Schliemann found the symbol in the site of ancient Troy in the late 19th century. He theorized that the symbol thus linked the Greek and Germanic cultures as this symbol was also often found on ancient Germanic pottery.  The work of Schliemann eventually was used by the völkisch movement, which in turn ultimately influenced Nazism. As Hitler later stated in Mein Kampf, “The basic ideas of the National-Socialist movement are populist (völkisch) and the populist (völkisch) ideas are National-Socialist.” 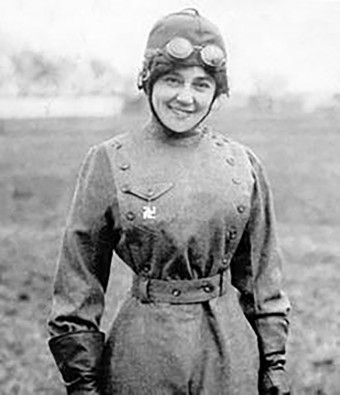 At this time, partially thanks to Schliemann’s work, the symbol experienced something of a resurgence across the Western world. For instance, the picture to the right shows famed American aviator Matilde E. Moisant (the second woman in the U.S. to receive a pilot’s license after Harriet Quimby) in 1912 wearing a version of the symbol as a good luck charm, which is also why certain sports teams, such as the British Columbian Fernie Swastikas women’s hockey team used it in the early 20th century. (In fact, the name “swastika” derives from the Sanskrit “svastika-s,” meaning “being fortunate.”)

The swastika was also still a commonly used symbol at this time among various groups of Native Americans, with it having slightly different meanings depending on the group.

In any event, Hitler was familiar with the symbol, thinking it connected Ancient Greece to the Germanic peoples as Schliemann had theorized. Whether he remembered it later in life or not, Hitler likely first encountered it as a boy at the Benedictine choir school at Lambach Abbey, Upper Austria, which Hitler attended when a child.  The school had a swastika chiseled into the monastery portal and also in the wall above the spring grotto in the courtyard.

Hitler stated of why the symbol was chosen for the Nazi flag, among other design elements, “I myself, meanwhile, after innumerable attempts, had laid down a final form; a flag with a red background, a white disk, and a black swastika in the middle. After long trials I also found a definite proportion between the size of the flag and the size of the white disk, as well as the shape and thickness of the swastika…” “Those revered colors expressive of our homage to the glorious past and which once brought so much honor to the German nation…” “As National Socialists, we see our program in our flag. In red, we see the social idea of the movement; in white, the nationalistic idea; in the swastika, the mission of the struggle for the victory of the Aryan man, and, by the same token, the victory of the idea of creative work.”

Given the Nazi’s usurping of this once ubiquitously symbol, today it’s firmly taboo outside of regions where Jainism, Hinduism and Buddhism (although with slightly different orientations) particularly are prominent. Needless to say, this has on occasion created a bit of cross-cultural misunderstandings in the ensuing decades, such as in 1999 when a 10 year old from New York bought Pokémon cards imported from Japan that contained the Buddhist version of the symbol on two of the cards in the set. This created quite a stir when the media got a hold of the story after the parents filed a complaint with the company, with many misinterpreting the symbol.  Ultimately, the manufacturer removed those cards from the sets exported to North America to avoid further misunderstandings.