April 9, 2015 Kathy Padden
Nancy P. asks: How were raisins made before seedless grapes? 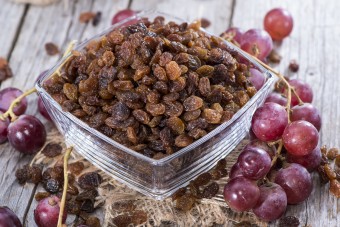 Leaving fruit to dry out in the sun is one of the oldest and easiest ways of preserving this variety of food- our ancestors being the type to never waste anything edible, even if it is sometimes past its prime (see: The History of French Toast). Not only did dried fruit keep longer and take up less space than fresh fruit, it was also sweeter and, some would say, more flavorful. As the cultivation of grapes spread quickly through the ancient world, so did the popularity of raisins.

It’s impossible to pinpoint the exact time and place, but it’s generally believed that grape cultivation originated in the area of modern day Armenia and then expanded to the Tigris-Euphrates region around 4000 B.C.E (which is now Iraq, Iran and Turkey.) The locals were already drying native fruits and they were probably more than happy to add grapes to their selection of date palms and figs.

The Phoenicians brought the grape, and, therefore, the raisin, to Malaga and Valencia in Spain and Corinth in Greece. Drawings depicting grape cultivation were also showing up on tomb walls in Egypt from as far back as 2000 B.C. As their popularity grew, so did their value as an object of trade. They were given as prizes, used for barter, and as a medicinal cure-all. Raisins were also seized as spoils of war and left as offerings to the dead.

But what about the seeds? How did the ancients deal with this issue before the advent of seedless grapes?

For starters, a type of tiny seedless grape used to make raisins, currants, have been around since at least 75 AD when Pliny the Elder wrote about them. This variety originated in Corinth, Greece, hence the name, “Currant,” a mispronunciation of “Corinth.”

Fast-forward to 1836 and currants were the principal Greek export, while it was a huge English import, as the British used copious amounts of the stuff in their cooking. However, by the early 1900s, the virtual Greek currant monopoly crashed, and many a Greek farmer left to try their luck in America.

Of course, seeded varieties of grapes were also used to make raisins, as often seedless grapes were more expensive. As such, varieties like Muscat grapes, which were the bumper crop in Malaga and Valencia, were hugely popular for making raisins. These grapes were big and fruity, with large seeds to match.

So how did people use these seeded grapes for raisins?  By popping the seeds out through the grape’s skin first. This had the side benefit (and drawback) of bringing the fruit’s sugar to the surface during the process, making for a very sweet, exceptionally sticky, raisin.

As to the exact methods, as these sort of raisins tended to transport poorly, people often did the seed popping and raisin making themselves to reduce expense. There were several methods employed to get that tedious job done. One method was to heat the grapes in water to plump them up and soften the skin before cutting them open and deseeding by hand. Not a fun job.

As such, there were also kitchen gadgets for deseeding grapes. For instance, one popular model worked by first having the cook feed the grapes into the hopper at the top of the device. As the handle was cranked, the grapes were forced through two teethed rollers which exposed the seeds and forced them out one chute and the future raisin out another. As you might imagine, even with the help of this little machine, making raisins was still a fairly tedious process.

This would all change when Muscat grapes lost their spot as the go-to raisin grape to a seedless grape variety. In the 1870s, just a decade or so after the first successful Currant vineyard had been established in America, a vineyard owner named William Thompson imported a different type of seedless grape cutting that he purchased from Almira & Barry nursery in New York, which he ultimately called “Thompson’s seedless.”

He gave some cuttings away to a neighbor, John Onstott, who realized these “new” grapes had great commercial potential, being tasty table grapes, good for making wine, and also having the necessary attributes to make good raisins- they ripen relatively early, are decent sized, have high sugar content, transport well, and, of course, are seedless.

Thompson’s seedless, which later were determined simply to be Sultanina grapes commonly grown before this in Asia Minor, among other places, were soon the cornerstone of California’s lucrative grape industry, with over two million cuttings of the plant being purchased by growers all over California within twenty years of Thompson planting that first cutting. Today, these grapes are used in over half of the raisins produced globally (around 90% of which are grown in California.)

As a result of the Thompson variety popping up and being grown en masse, helping to make seedless grapes and raisins more affordable, today Muscat raisins are typically as hard to find in your local supermarket as rotary phones. But Muscats are still prized (by some) as making for tastier raisins than any available seedless grape. Also, relatively recently a seedless variety of the Muscat has been developed, so it may soon enjoy a resurgence in popularity.  We shall see.