This Day in History: March 31- DST 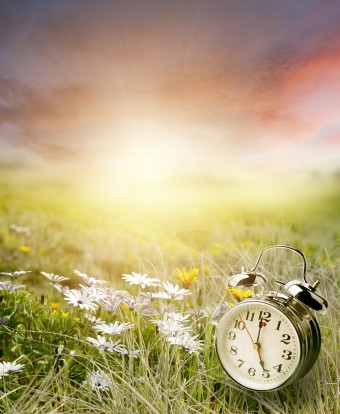 The concept of daylight saving time (or at least something like it) was first bandied about, albeit jokingly, by that American sage Benjamin Franklin during his sojourn in Paris in 1784. The idea was included in a satirical essay he wrote called ‘An Economical Project” published anonymously in Journal de Paris.

By the time Ben was 78, Mr. “Early to Bed and Early to Rise” had changed his tune a bit, and was inspired to write the essay after being woken up at 6 a.m. by the summer sun one too many times. His article offered the tongue-in-cheek practical plus that by rising at dawn, the people of Paris could save oodles of money by “using sunshine instead of candles.”

He then suggests a variety of methods to induce people who were “obstinately attached to [the] old custom” of getting up at noon to instead wake up with the sunrise. These included taxing people who have shutters on their windows, rationing candles, and waking people as soon as the sun comes up by ringing church bells and firing cannons.

Because of this essay, Franklin is often falsely credited with the invention of daylight saving time. But Ben merely suggested a change in sleeping schedules to give people more daylight hours to work with, not an adjustment to time itself.

The modern day version of daylight saving time was first proposed by the New Zealand entomologist George Vernon Hudson in 1895. However, he is rarely given much credit for being the first in this case and is sometimes not even mentioned at all.

That’s because the person who generally gets most of the credit, an Englishman named William Willett, in the early 1900s led the first major campaign for daylight saving time with an evangelistic zeal that dominated his life. Inspiration struck while he was out for an early-morning horseback ride around London. He noticed the streets were all pretty much empty with most buildings shuttered up with sleeping occupants, despite that it was quite light out. It then dawned on him that if every April through October everybody turned their clocks ahead by 80 minutes, everyone could enjoy more of the plentiful seasonal sunlight without needing to change their normal schedules.

In 1907, Willett published a brochure entitled “The Waste of Daylight” and blew most of his life savings trying to convert the masses over to what he called “summer time.” Parliament turned his idea down year after year, and Willet died in 1915 without ever seeing his pet cause come to fruition.

Daylight saving time was first implemented in the United States on this day in history, March 31, 1918, as a war-time conservation tactic as well. At the time, one of the principle uses of electricity and certain other valuable fuel sources in the home was for lighting. Daylight saving time reduced the need for such lighting slightly.  That slight reduction across many millions of homes added up to quite a savings on certain resources.  So really not a bad idea at the time.

Because of our modern, vastly different, energy usage (only about 3.5 percent of our energy usage today goes towards lighting), the effect is now negligible. However, it has been shown to be a profitable thing for many stores, particularly those that sell product related to outdoor leisure activities.

Contrary to the real original intent, most people today believe the initial idea was to give farmers more time to work in their fields. But, in reality, what time it is has little effect on a farmer’s schedule. Farmer’s days were (and to some extent still are) ruled by the sun and the needs of their crop or livestock, not the clock. In fact, for various reasons, farmers led the fight for the repeal of national daylight saving time in 1919. It’s historically been urbanites that favor daylight saving, not country folk.

After daylight saving was done away with on a national level in 1919, the practice became a confusing hodge-podge as some cities, such as New York City and Chicago, decided to continue the practice, while most other places were more than happy to see it go. That is, until World War II, but once the war was over it went back to the same mass confusion we came to know and love in 1919, that Time magazine described in 1963 as “a chaos of clocks.”

Public order was restored in 1966 with the introduction of the Uniform Time Act. This defined daylight saving time as extending from the last Sunday in April to the last Sunday in October, rather than letting each region decide the dates. States did have the right to remain on standard time all year if they chose. Out of the fifty states, Arizona and Hawaii remain on standard time year-round.