This Day in History: March 30th- The Last Executioner in Britain 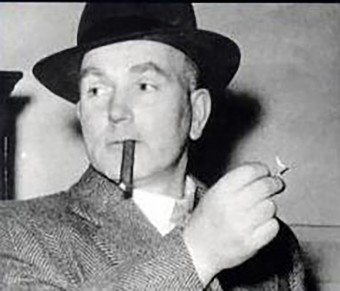 On March 30, 1905, an unassuming and dapper Englishman named Albert Pierrepoint was born who would one day own a pub in Lancashire called “Help the Poor Struggler.” He would also have another job that was a bit more unusual – Great Britain’s Chief executioner.

His atypical trade was a family affair. The Pierrepoints occupy a unique place in the British justice system, as Albert’s father and uncle also served as public executioners. He was unaware of the nature of their business as a child, but when he discovered the truth in his teens, a desire to follow in their footsteps began to grow within him.

He applied to the Home Office in 1930 for inclusion on the list of official executioners, but even nepotism couldn’t help him win a spot – he was told there were no vacancies. A year later, he was accepted at Strangeways prison as an assistant executioner after a week of intensive training – and subject to his conduct during an actual execution. He acted as his uncle Tom Pierrepoint’s, then the chief executioner, assistant, and did the job well.

By 1941, Albert was Britain’s new chief executioner, a job he carried out with dignity, compassion – and precision. Pierrepoint never spoke of his occupation while still employed. It wasn’t until he retired and wrote his autobiography Executioner: Pierrepoint that he commented at all about what went on in the execution chamber. His book is completely devoid of sensationalism and never makes light of the gravity of capital punishment.

During his career, Pierrepoint hanged more than 400 convicted felons, mostly murderers, but a few convicted of being traitors as well. At one time, a sentence of hanging meant a slow, tortuous death by strangulation, but Albert went to great lengths to ensure the condemned prisoners he executed died as quickly and humanely as possible.

By taking the person’s height, weight and age into consideration, and positioning the knot of the noose to the left, Pierrepoint could almost always ensure an instant death by calculating the exact “drop” needed to do the job. Not enough rope, the prisoner ends up dying of suffocation. Too much rope, you risk a decapitation, which perhaps at least for the condemned is preferable to the suffocation route. Albert had a knack for this grisly skill. But he never became jaded or hardened, writing, “A dead man being taken down from execution is a uniquely broken body, whether he is a criminal or Christ.”

So what was the standard procedure for the average execution? Steve Fielding, author of a book on the Pierrepoint dynasty, says, “Just before the time of the execution, the executioner and his assistant join the … prison officials outside the door of the condemned cell … the executioner enters the cell and pinions the prisoner’s arms behind his back, and two officers lead him to the scaffold and place him directly across the division of the trap on a spot previously marked with chalk. The assistant executioner pinions the legs, while the executioner puts a white cap over his head and fits the noose round his neck with the knot drawn tight on the left lower jaw, where it is held in position by a sliding ring. The executioner then pulls the lever.”

Preferring to keep a low profile, Albert was not happy when Gen. Sir Bernard Montgomery let it be known that Pierrepoint was set to execute the convicted Nazis at Belsen in Germany. He hanged 13 criminals on Friday, December 13, 1945. Every Christmas for many years following that event, Pierrepoint received an envelope with five pounds and a note reading simply “Belsen.”

How did Albert Pierrepoint feel about capital punishment?

The fruit of my experience has this bitter after-taste: that I do not now believe that any of the hundreds of executions I carried out has in any way acted as a deterrent against future murder. Capital punishment, in my view, achieved nothing except revenge.

(Which brings up the interesting point of discussion on whether most judicial systems and subsequent punishments for crimes are more about revenge, deterring similar crimes by others, or removing someone who has demonstrated they cannot function in a civilized society until such point as they are rehabilitated.)

In any event, although Pierrepoint honestly believed throughout his career he was carrying out a sacred public duty, he stated “I now sincerely hope that no man is ever called upon to carry out another execution in my country.”

Albert Pierrepoint retired in 1956 and passed away in 1992. Capital punishment was abolished in Great Britain in 1965.