October 13, 2012 Dan Lewis
This is a guest post by Dan Lewis. Dan runs the wildly popular daily newsletter Now I Know (“Learn Something New Every Day, By Email”). To subscribe to his daily email, click here. 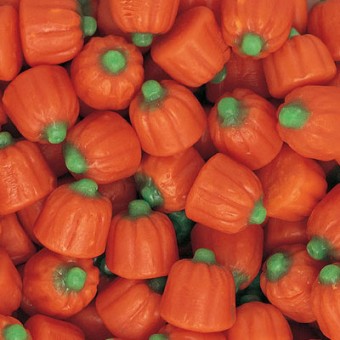 While the second part of the second change seems curious — after all, it pushes Daylight Saving Time’s end date back merely a week –one of the forces behind the change is, at best, unexpected: candy pumpkins, like the ones seen above.

While the 2005 changes to Daylight Saving Time were, purportedly, aimed at saving energy (in fact, the amendment is part of a bill called the Energy Policy Act of 2005), many are skeptical of any such savings. Case in point: Michael Downing, author of Spring Forward: The Annual Madness of Daylight Saving Time, told NPR that “it turns out every time Congress has studied [Daylight Saving Time], it’s been told that we haven’t saved anything.” Continued Dowling, any savings from less at-home or at-work energy use is eaten up by additional cars on the road, as people begin to spend their additional natural-daylight leisure time shopping: “[t]he first and most persistent lobby for Daylight Saving in this country was the Chamber of Commerce, because they understood that if their department stores were lit up, people would be tempted by them.”

But the Chamber of Commerce was not the only organization lobbying for the extension of Daylight Saving Time. And it was, perhaps, not even the most vocal. That distinction goes to the candy lobby. For them, a one-week move — from the last Sunday in October to the first in November — meant big bucks, as it allowed for an extra hour of trick-or-treating come each Halloween.

And in 1985, the candy industry made its first attempt to get its desired change enacted with a little bit of bribery — a very little bit. Before the relevant hearing, they took to the Senate chambers with a bag of candy pumpkins in hand, placing some of the treat on each Senator’s chair. But for their treats, Congress returned a trick, keeping the clock rollback date to a time before Halloween. It would be twenty years later, under the 2005 bill, that the candy industry would get their desired outcome.