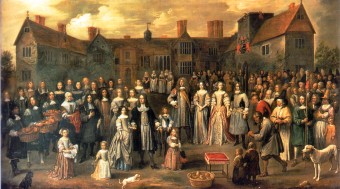 The Tichborne Dole dates back to medieval England during the reign of Henry II. The story began in 1150, when Lady Mabella, the wife of the miserly and cruel Sir Roger Tichborne, asked her husband to fulfill her one dying wish. She warned that he and his heirs would suffer dire consequences if her request were not carried out each year. When the Tichbornes grew lax in their duty, her curse seemed to hold true, and the family quickly suffered the consequences.

Lady Mabella was known for her kindness and charitable nature. Sir Roger, on the other hand, was famous for being a complete jerk. Even as his wife was slowly wasting away, he remained unmoved by her suffering. Lady Mabella still hoped her husband would grant her one final humanitarian request: that a small portion of the vast Tichborne estate would be allocated to aid the poor in the form of an annual dole.

Sir Roger said sure, he’d donate the spoils from any stretch of land Mabella could manage to crawl around holding a lit torch. Nice guy. So the story goes that the dying, crippled Mabella mustered all the strength she could, and by sheer force of will managed to make it around 23 acres. The area is still known as “The Crawls” to this day.

As she lay clinging to life after her exhausting work-out, Lady Tichborne charged her husband and all the Tichborne heirs with giving the bounty she’d just earned to the poor on Lady Day, March 25 in perpetuity. But, fully aware of Sir Roger’s parsimony, Mabella added a chilling curse – should you or any other Tichborne heir not honor the dole, a generation of seven sons would be followed by one with seven daughters. Then the Tichborne name would be no more, and the house itself would come to ruin.

As the centuries passed, the Tichborne Dole was distributed every year on March 25 per Lady Mabella’s instructions. But by the end of the 18th century, a circus-like atmosphere pervaded the event, causing chaos and annoying the Tichborne’s snooty neighbors. According to the July 1871 edition of The Gentleman’s Magazine:

… under the pretence of attending the distribution of the Tichborne dole – vagabonds, gipsies and idlers of every description assembled from all quarters, pilfering through the neighbourhood and causing many complaints amongst the magistrates and surrounding gentry…

Considering the out-of-control free-for-all the dole had become coupled with the huge cost, Sir Henry, the current Tichborne baron in residence, decided enough was enough and abolished the dole. Less than four years later, a section of Tichborne house caved in, and the rest of the home had to be demolished. Then Sir Henry went on to have seven sons.

His heir, Henry Joseph, had seven daughters, but no son to inherit the title and estate. One of Henry’s grandsons survived to take on the baronetcy, and the dole was quickly re-established, with the stipulation that only families residing in Tichborne, Cheriton and Lane End are eligible for the Tichborne Dole. Each adult receives one gallon of flour, each child one half gallon. Before the flour is distributed, the huge box is blessed by sprinkling it with holy water and a blessing is made for the soul of Lady Mabella Tichborne, their kindly medieval benefactor.