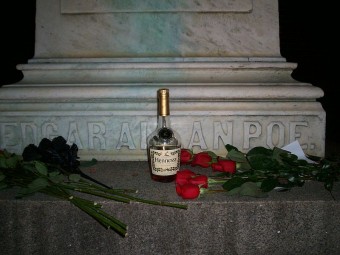 On an autumn evening, October third to be exact, in 1849, a middle-aged Edgar Allan Poe was found wandering the streets of Baltimore, Maryland in a delusional, hysterical state. Unkempt, dirty, with “vacant eyes” and in someone else’s clothes, the writer was admitted to Washington College Hospital unable to explain what had happened to him.

At five am on October seventh, Edgar Allen Poe was pronounced dead. The cause of death has never been definitively identified, though theories have included cirrhosis of the liver, cholera, rabies, syphilis, influenza, and a victim of cooping (more on the cooping theory in the Bonus Facts below). Either way, after a small funeral, Edgar Allen Poe was laid to rest at Westminster Hall and Burying Ground in Baltimore.

As Poe laid there, unmoving, for decades, his legend as “the master of macabre” grew. His literary classics such as “The Fall of the House of Usher”, “The Tell-Tale Heart”,  and “The Raven” inspired legions of fans and admirers. But no admirer has quite showed their enthusiasm for Edgar as the person (or persons) known as the “Poe Toaster.”

Beginning nearly 80 years after Poe’s death, in the 1930s, witnesses began seeing a shadowy figure, dressed in black with a white scarf and a wide-brimmed hat, visiting Poe’s grave every January 19th, the birthdate of the legendary literary figure. In the dead of night, the individual would arrive bearing three roses and a bottle of cognac. When the sun rose the next morning, the roses would be in a distinctive arrangement, the bottle of cognac would be half-drunk, and, sometimes, a note would be left sitting silently on the grave.

This act of tribute was first mentioned in a 1950 Evening Sun (Baltimore’s evening newspaper) article as an effort to bring attention to the church for a restoration. Through the years, the public began to learn more about this dark figure. The three roses represented Poe, his tuberculosis-stricken and beloved wife Virginia, and his mother-in-law Maria Clemm — all three of whom were originally interred at the same site. The bottle of cognac spoke to Poe’s long love of drink. As for the significance of cognac specifically, a 2004 note inferred that this was a tradition of the toaster’s family, rather than Poe himself.

The notes that were left further shrouded this mystery. Sometimes the scribbles quoted Poe’s poems and stories. Sometimes they were simple words of devotion, like “Edgar, I haven’t forgotten you.” Other times, though, it cast a light on the person that was coming to visit every year. For instance, in 1993, the note cryptically mentioned that “a torch will be passed.” In 1999, another note indicated that the original toaster had passed and a “son” had been assigned this task.

So who was behind this? Many think that the true identity lies somewhere with Jeff Jerome, the former curator of the Poe House and Museum in Baltimore. He himself has been a suspect, but Jerome has repeatedly denied it. Though, he admits he knows more about the identity of the real individual than anyone else. After becoming a tour guide at Westminster Hall in 1976, he began to do research on Poe’s final resting place. That’s where he found the 1950 press clipping and on January 20, 1977, he found the roses and cognac waiting in the cold morning light. That day, Jerome became enamored with the Poe Toaster legend. From that moment on, he and a few other Poe enthusiasts would sit in the church every January 19th waiting to catch a glimpse of the elusive figure.

That all changed in 1990 when Life magazine published a black & white image of the Poe Toaster doing his deed. Soon, the Poe Toaster became an international sensation. In the years that followed, scores of people would wait outside of the cemetery gate hoping to see this figure. It also spawned countless imposters. But Jerome made it his mission to preserve this tradition and to make sure the real Poe Toaster could do his deed. He made it easier for him get into the cemetery without dealing with the crowds (probably by leaving open the Wineholt Gate, which, incidentally, was used to bring in Poe’s body). He arranged a string of subtle signs with the Toaster himself that would indicate that he was, in fact, the real one. This arrangement worked and allowed the tradition to be continued without interference. At least until 2009, the bicentennial of Poe’s birth.

Leading up to the 160th anniversary of Poe’s demise, there were clues that the Poe Toaster tradition may be coming to a close. Starting in 1999, when the aforementioned new toaster took over the tradition, notes, like one referencing Baltimore’s football team and another one in 2004 criticizing France’s involvement in the Iraq War, seem to not take the tradition seriously. In fact, Jerome admitted that certain notes had so badly marred the original Toaster’s motives, that he has denied their existence.

With over a hundred people in attendance in 2009, waiting for the Poe Toaster, it had officially become more of spectacle than both the Poe Toaster and Jerome would have liked. In 2010 and 2011, no toaster showed up (save for imposters) at Poe’s grave for the first time in least seventy years. In 2012, Jerome declared that if the real toaster did not show up that year, he would call the whole thing off and declare the tradition dead. No one came.

Despite Jerome no longer holding out hope, spectators came out in force in 2013 to watch. Still, no one came. Jerome believes that 2009, the bicentennial, was the logical time to end the tradition. Said Jerome in 2013 to WBAL in Baltimore,  “My personal feeling is the novelty wore off and they didn’t like fighting the crowds and trying to find ways to get in here… And [they were] afraid someone would try to tackle them with a camera right in their faces.”

With so many Poe fans and admirers around the world keeping an eager eye out, it is becoming exceedingly likely the tradition of the Poe Toaster may be nevermore.