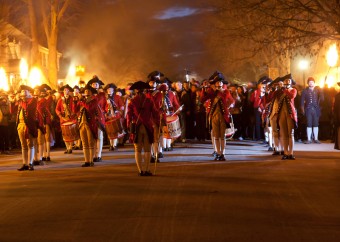 On March 24, 1765 the British Parliament passed the Quartering Act, which specified the obligation of the American colonists to provide British troops with shelter and provisions. The Act ordered the colonists to provide barracks for the soldiers stationed nearby, and if they did not have ample space in the barracks, housing must be found for them in local inns, ale houses, or livery stables.

If there were soldiers still needing room and board after public establishments were full, the colonists were obliged to open their barns, outbuildings or empty houses for shelter. They were also expected to provide necessities including bedding, candles, firewood, beer and cooking utensils.

Although there was some desire to protect their far-away subjects, the cost of doing so was weighing heavily on the taxed-to-hilt British public. Someone had to pay to bring home the veterans from the French-Indian War and provide them with pensions. Officials in Britain could see no reason why that the American colonists should not bear the brunt of the cost.

Coming hot on the heels of the Stamp Act, in an atmosphere of resentment and when there was more than the average number of British troops patrolling in Americans cities, this new edict from across the pond was not met with enthusiasm from the colonists. For starters, there was the American preference for militia units as opposed to formal armies. They preferred to call up conscriptions on a threat-by-threat basis, and then disband.

Even more importantly was the cost, which was immense. Calling up a militia was much less expensive than funding a standing army. Since the colonists felt there was no imminent threat from the French, they believed the British presence in America was more about forcing compliance with unpopular laws than keeping the citizens safe from harm.

Although many believe the British were forcing people from their homes so they could set up shop, that simply wasn’t the case, but it didn’t need to be to rile everyone up. The New York colonial assembly took umbrage at being ordered to provide quarter to the British – if the troops were going to be present at all; New Yorkers felt they should have at least been asked instead of ordered.

New York refused to comply with the Quartering Act, and the British Parliament retaliated by passing the New York Restraining Act, which prohibited New York’s governor from enacting any new legislation until they acquiesced. Things simmered down, but the bitterness remained – and grew.

Meanwhile in Boston, soldiers were already housed on an island in Boston Harbor, but keeping the peace from out in the ocean simply wasn’t possible, so the troops had to be stationed in the city. To keep in compliance with the Quartering Act, the soldiers could only be housed in public places, which meant the only option was to pitch tents in Boston Common. This went over like you might expect and, with the troops stationed smack-dab in the middle of town, it didn’t take long for skirmishes to turn into street fights, which led to the Boston Massacre in 1770, when five Bostonians lost their lives. Any remaining goodwill between the colonials and the troops was gone for good with that event, and the British soldiers in this area were viewed as an occupying enemy force from that point on until they were driven out in 1776.