This Day in History: March 20th- Franklin and France 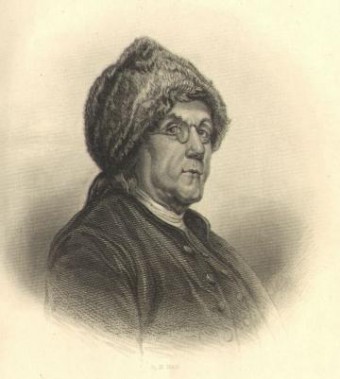 In the 18th century, as is the case now, politics was a dirty, self-serving business. During its earliest days as a nation, the United States of America deftly took advantage of France’s age-old antipathy towards England. In turn, King Louis XVI of France was using the Americans to vex his old enemies as much as possible.

Benjamin Franklin had arrived in France accompanied by Silas Deane and Arthur Lee in December of 1777. Franklin knew the image he wanted to project – that of the wise but humble country bumpkin – clad in a simple brown suit with a fur hat instead of a more highfalutin powdered wig. His reputation as an inventor and statesmen already preceded him, so there was no need to toot his own horn. Deane and Lee followed suit, presenting a non-threatening, provincial countenance.

It paid off in spades. They not only won the admiration of the diplomats they were hoping to win over, but also the love of the French people with their simple, home-spun charm. The three Americans, the charismatic Franklin in particular, became the toast of Paris and Versailles.

So, even though King Louis XVI had his reservations about supporting a country brought about by revolution (a premonition perhaps?), he put them aside knowing how badly it would irk England’s King George III. On March 20, 1778, Louis received the three representatives from the United States, Franklin, Deane and Lee, in the Royal bedchamber at Versailles. His Majesty presented them with a letter for the American Congress extending his friendship.

This meeting was merely a formality. The American envoys had already negotiated a treaty with the Minister of Foreign Affairs that was finalized on February 6, marking the entry of France into the war with the U.S. against England. The King subsequently sent 6,000 troops to America under the command of Rochambeau, a huge boon to the war effort. Among other things, this was instrumental in the defeat of the English at Yorktown in October 1781, which sealed the deal for the Americans.