This Day in History: December 4 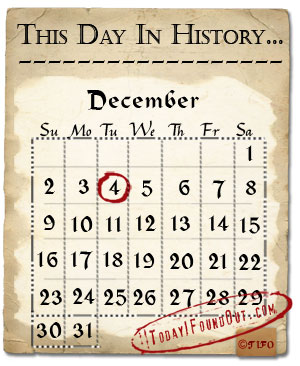 On this day in history, December 4

1872:  The crew of the British craft Dei Gratia spotted the Mary Celeste (originally named The Amazon before being purchased and rechristened) still under sail, but yawning slightly.  Upon closer inspection, they observed that no members of the crew were on deck.  After several hours of watching from a distance, they finally decided to board the vessel.  What they found was a ship devoid of any crew.  Its cargo and food stocks were still there.  The crew’s personally items also seemed to more or less all be aboard the ship.  Only a few items were missing including the life boat, navigational equipment including the ship’s sextant and marine chronometer, two bilge pumps, and the ship’s papers, including maps, but excluding the ship’s log book, which was still aboard.  There was also a frayed rope trailing the ship.  None of the crew were ever seen or heard from again. You can read more on the Mary Celeste here.

1875: William “Boss” Tweed escapes from prison and flees to Spain.  Boss Tweed was a democratic politician and was, for a time, the leader of Tammany Hall, a New York City Democratic Party political organization. So what did Boss Tweed do to get put in prison in the first place?  Well, he stole about $25-$200 million from New York City taxpayers during his time in office.  Today, that would be about $400 million to $3.5 billion.

He managed this using a variety of schemes and accomplices, generally seeming to keep the city books clean the whole time (more or less). One of the popular schemes they’d use is the old “$500 for a hammer” type scam often made fun of in certain current government contracts, particularly those with the military.

Basically, Tweed and his cohorts pushed a variety of city projects, which created jobs and improved the city in a variety of ways, making him very popular in the city.  He’d then have the contractors (specially picked ones, loyal to him) multiply the cost of whatever project they were doing by 5-20 times the amount it would actually cost, and then bill the city for that.  Once the money was paid and the job completed, the surplus would be divided amongst Tweed and his group, including the contractors.

As an example, in one such contract, a carpenter was paid by the city $360,751 for one months’ worth of work.  That’s a lot even by today’s standards, but at the time it was actually about $6 million when adjusting for inflation.

Another scheme he and his group used was to buy a significant amount of property in run down or undeveloped regions of the city.  They’d then establish and promote new projects to improve those parts of the city.  The taxpayers were happy as the city was being improved, and Tweed and his group not only made money using the above contractor scheme, but also on the increased property values.

It was the perfect scheme as all the projects and charities the city was supporting in spades made the people happy, which allowed Tweed and his fellows to continue being elected, as well as helping others who would join their group be put in key offices.  They were making money hand over fist.

It all came crashing down starting with a campaign by the New York Times to get the city’s books examined.  At first, everything came out clean, largely from bribes and that many who were examining the books were more or less on Tweed’s payroll, so to speak.  The Times persisted and also began getting inside information from certain individuals on the schemes.  From this inside information, eventually the Times had all they needed to show at least some of the frauds being executed.  Tweed responded by offering the New York Times $5 million (about $300 million today) to not publish their findings, as well as to start giving a significant amount of his wealth to members of his family.  The Times refused the bribe and published their information.

Tweed was arrested, but then released on a $1 million bail (about $17 million today).  He then managed to get re-elected to the state senate, despite all the corruption.  He was then arrested again and forced to resign.  This time the bail was set at $8 million (about $136 million today).  He paid that and was released again.

In 1873, he was convicted on 204 counts of various things to numerous to list here, resulting in $12,750 in fines (presumably he was able to pay that with change found between his couch cushions), and given a 12 year prison sentence, which was reduced to 1 year because he still had a lot of powerful friends.  He served his sentence and was released.

Now the real punishment started.  The state of New York filed suit against him for $6 million.  He was arrested again, with a bail set at $3 million (about $52 million today).  At this point, he’d given away most of his fortune to family members, and was unable to come up with the bail and obviously wouldn’t be able to pay the lawsuit.

Despite not paying the bail, he was still allowed to leave the prison to visit his home from time to time.  At a certain point on one of these visits, he decided to make a run for it, rather than go back to jail, and joined up on a Spanish boat where he worked as a seaman.  However, by the time he got to Spain, the Spanish were ready for him, having been informed  by the U.S. that he was coming. He was arrested and sent him back to America where he was placed back in prison just under a year after his initial attempt to run.

Rather than face a potential lengthy jail sentence, Tweed cut a deal to expose his entire former operation, and everyone involved.  In exchange, he would get no further jail sentence (though given how many powerful people he’d be stabbing in the back, this was quite the risky thing to do).  After he’d fulfilled his part of the bargain, the governor of New York decided to not fulfill his end, and kept Tweed in prison.  He died there about two years later of pneumonia.