The Ends Justify the Means 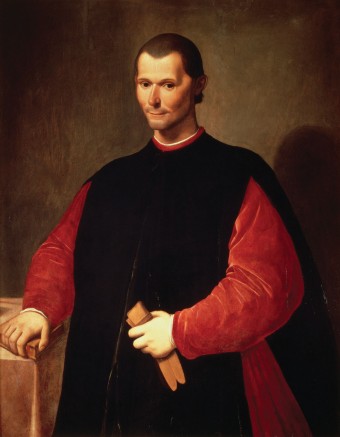 Entangled in Florentine politics during a tumultuous time at the height of the Renaissance, Niccolò Machiavelli became alternately a diplomat, a victim, a prisoner, an exile and, ultimately, the “father of modern political theory.” And although he remains famous today for his well-articulated methods for ruthlessly thriving in a corrupt world, he never said the phrase that is most often attributed to him: “the ends justify the means.”

Machiavelli was born in Florence in 1469. The child of an attorney, Machiavelli studied grammar, rhetoric and Latin, and as such, early on he landed a job supervising production of official government documents. He was later given a series of diplomatic missions, including to royal courts in Spain and France, as well as with the Papacy.

Making his bones as a political figure at the turn of the 16th century, early on Machiavelli crafted a reputation for shameless deviousness. He also witnessed a fair bit, most notably that of the Borgia’s (Cesare and Pope Alexander VI) who were then striving to take control of a large swath of central Italy.

Leading the Florentine militia against its unsuccessful resistance to the return of the Medici’s in 1512 (they had been exiled in 1494), Machiavelli was left holding the bag when the Medici’s resumed power. As such, he was tortured, jailed and exiled.

Apparently fiscally comfortable, Machiavelli spent his banishment at his estate outside of the city. While away, he had plenty of time to ruminate over all he had witnessed during his years in Florentine politics, and one of the results was The Prince. Recommending treachery, hypocrisy, cunning, cruelty and ruthlessness, the book reads like a manual for getting and keeping power at any cost.

It’s not quite clear when he published The Prince, although some accounts say versions were being distributed as early as 1513. A second work, Discourses on the First Ten Books of Titus Livius, was also written that year, and 8 years later, he drafted On the Art of War. Machiavelli died in 1527, and the first known printed version of The Prince appeared in 1532.

Today scholars dispute whether or not The Prince is actually a satire (many claim its basic philosophy is antithetical to that espoused in his other works), but regardless, much of Machiavelli’s advice remains effective, if morally repugnant, today. To wit:

And, of course, the passage whence the famous line he never said was drawn:

Let a prince have the credit [as] the means will always be considered honest . . . because the vulgar are always taken by what a thing seems to be and by what comes of it.