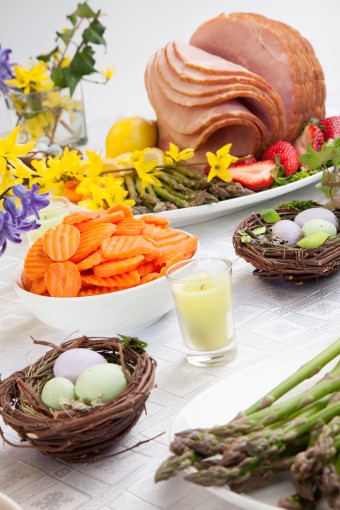 Under Jewish dietary laws (called kashrut), eating pork in any form is strictly forbidden. Jesus Christ was Jewish. So why, on the anniversary of his resurrection, do people traditionally serve ham? You’ll often read it’s because ham is supposedly a “Christian” meat, able to be consumed by Christians but not certain other prominent religious groups.  However, the real reason is simply because it’s in season.

While modern food storage techniques and supermarkets with efficient and worldwide supply chains shield us from this fact somewhat, like fruits and vegetables, different meats also have seasons, and these depend on a variety of factors including what the animals were eating and when, where they were in their growth cycle, and the availability (or lack) of refrigeration.

With pigs and cows, before refrigeration, it simply made sense to slaughter them in the fall. Since it takes a fair amount of time to butcher a beast as large as a hog or steer, the cold temperatures helped keep the meat from going bad before it could be properly prepared.

Another consideration was taste. Shortly before slaughter in the fall, hogs would be fed things like apples and acorns that would greatly improve the flavor of the meat they would ultimately provide. As one specialty pork producer noted:

The tradition of acorn-fed pork goes back millennia . . . . The oak nut was a diet staple because the pigs roamed and rooted about for acorns in the forests of Italy and Spain. An acorn diet is today best known as what makes the prized and pricey Jamón Ibérico of Spain so succulent.

Butchered in the fall, most hams were prepared and allowed to properly cure over the winter to further develop their flavor. This was a particularly important food source this time of year in some parts of the world where the rest of the stored meat would have already been eaten, with little other meat of any real quality available. This was the case in North America where the other traditional spring meat, lamb, was (and still is) less in vogue, which is also why eating ham on Easter in North America is much more popular than other regions where Easter is celebrated.

Conversely, in Europe, lamb is commonly served at Easter, and the tradition actually traces its origins to Jewish Passover feasts. This is also certainly fitting for Easter, with Jesus as the “lamb of God.” Born shortly before the holiday, young lamb may be slaughtered within 6 to 8 weeks, and thus offer a fresh, as opposed to cured, option for Easter protein when historically other such protein sources were scarce at this time of year.