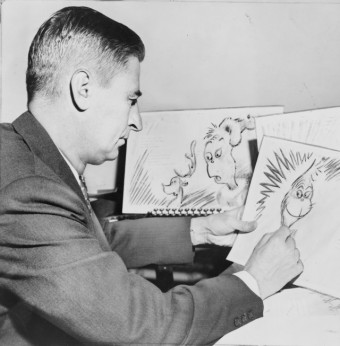 Today I found out Dr. Seuss wrote “Green Eggs and Ham” on a bet that he couldn’t write a book with fifty or fewer distinct words.

The bet was made in 1960 with Bennett Cerf, the co-founder of Random House, and was for $50 (about $382 today).  Despite Dr. Seuss, a.k.a. Theodore Geisel, winning the bet by producing one of his most popular works Green Eggs and Ham using exactly 50 unique words, Cerf never paid up.   Green Eggs and Ham went on to be Geisel’s best selling work, so he made out on it anyways.

Geisel’s first successful children’s book, Cat in the Hat, also was the result of a challenge to write a book in under a certain number of words. John Hersey, a Pulitzer Prize winning journalist, wrote a piece in a May 25, 1954 issue of Life magazine titled, “Why Do Students Bog Down on First R? A Local Committee Sheds Light on a National Problem: Reading.” which was extremely critical of school primers.  At the time, children were reading primers like “Fun with Dick and Jane“, which are anything but fun and don’t inspire kids to want to read outside of what they are required.

As a response to this, William Spaulding, director of Houghton Mifflin’s educational division, challenged Geisel to “write a story that first-graders can’t put down” and asked that it be limited to 225 distinct words from a list of 348 words that were selected from a standard first grader’s vocabulary list.

Geisel nearly succeeded, using 236 unique words in the story, though the endeavor took him nine months largely due to the word restriction.

The original story itself was supposed to be about a King cat and a Queen cat, but “queen” wasn’t on the list of acceptable words. Geisel then looked through the list of words and spotted “hat”, which obviously rhymed with “cat”, so decided to make a story out of that instead.

The Cat in the Hat was published in 1957 and went on to sell around one million copies in the first three years after being published, allowing Geisel to stop working in advertising and to focus on writing children’s books.

With his books, he not only wanted to help kids learn to read in an enjoyable way, but he also wanted to “teach them how to think”, which he felt was particularly important as he stated:

Children’s reading and children’s thinking are the rock-bottom base upon which this country will rise. Or not rise. In these days of tension and confusion, writers are beginning to realize that books for children have a greater potential for good or evil than any other form of literature on Earth.