March 24, 2015 Karl Smallwood
Nick C. asks: How did they settle on six feet deep for graves? 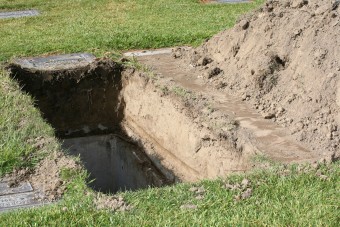 If there’s one thing everyone knows about graves other than the fact that they’re really spooky at night, it’s that they’re always six feet deep.

In truth, despite “six feet under” being synonymous with the very idea of death, it has little to no relevance in burial customs. For starters, the rules on exactly how deep you’re legally supposed to bury someone when they die are by no means universal. One of the few general rules today is that a coffin can be covered by no less than 18 inches of dirt, which you may notice means you can technically bury a person less than two feet deep in many areas, if you discount the amount of space displaced by the coffin itself. However, it’s often standard practise to bury people deeper than this so that there’s room to bury another person in the same grave, often loved ones. As such, in some regions, even as deep as twelve feet isn’t unheard of.

Of course, as with most things in life, there are exceptions to even this loose guideline and it’s technically possible to bury a person in an even shallower grave in some rare circumstances. For example, the graves of children and babies are often much shallower than those of adults. (In some regions, like the UK, the fees for burial of a child can even be waived.)

In regards to location, this too can effect the depth at which a body can be buried. For example, in areas of land prone to flooding or high water tables, bodies can’t typically be buried any deeper than the supposedly traditional six feet due to the risk of them becoming waterlogged and even rising from the Earth like terrifying wooden icebergs. If you think this sounds far fetched, we feel compelled to point out that early American settlers had to resort to burying their dead above the ground in what is now New Orleans because heavy rains would make coffins explode out of the ground. This remains a problem for New Orleans even to this day.

Further, several regions in the United States, such as Connecticut, have no hard rules in place prohibiting the burying of bodies on private property.  As long as you fill out the correct forms before doing it and you’re sure you’re still within the confines of the land you own, you could theoretically bury someone on your property as shallow or as deeply as you wished.

In the UK, the guidelines are even more lax to the point that it is literally easier to bury a person on your property than it is to build a garage on your land. Since a lot of the rules surrounding private burials in the UK are derived from fairly archaic legislation, there are only a handful of guidelines you need to adhere to, including filling out a few forms, informing people where the body actually is and making sure it’s not buried near water. In terms of how deep the body needs to be buried, this is almost entirely down to the discretion of the landowner with the only real stipulation being that it should be at least deep enough so that animals won’t dig up the body, but even then no exact figure is given.

As for how the figure of six feet came to be so synonymous with burial, despite there being little evidence of the so-called standard either now or in history, it’s really not clear. However, a popular notion is that it stems from a decree issued by London’s mayor during the plague of 1665, in which it was stated that bodies had to be buried a set, deep distance below the Earth to halt the spread of the disease. Though a marginally convincing theory on the surface, it should be noted that the primary source of this often quoted theory is Daniel Defoe’s fictionalized account of the plague’s spread through London entitled, A Journal of the Plague Year. That said, the book is believed to have been based on the journal of a person who lived through said plague and there is some evidence that the book popularised the idea, regardless as to whether this standard was really briefly established in London in the 17th century or not.