The Difference Between a Coffin and a Casket 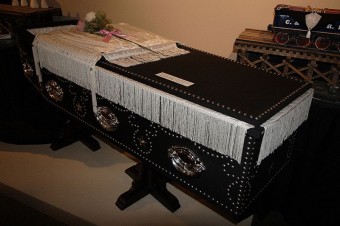 Today I found out the difference between a coffin and a casket.

The words coffin and casket are often used interchangeably to describe a box used to bury a dead body in.  Although the general purpose of each is the same, there are small differences between the two.

The term coffin has been used to describe a container that holds dead bodies for burial since the early 16th century. The shape of a coffin typically resembles the shape of a body and has six or eight sides. It is wider at the top for the shoulders and gradually decreases in width toward the opposite end where the feet are placed (picture Dracula’s spider web covered coffin in all the scary movies). Depending on all the bells and whistles a person chooses to adorn a coffin with, the hexagonal or octagonal shape is considered to save wood for construction and can be cheaper than a casket.

On the other hand, the word casket was originally used to describe a box used to store jewelry and other small valuable items before coming to have an additional  meaning somewhat synonymous with coffin around the mid-19th century.  A casket is typically a four-sided rectangular box and, when used for burying people, often contains a split-lid for viewing purposes.

Interestingly, it is thought that the word casket was adopted as a substitute word for coffin because it was deemed less offensive, especially when morticians and undertakers started operating funeral parlors instead of mortuaries. In addition, the shape of a casket was thought to be less dismal  because it did not depict the shape of a dead body.  Given that they both are essentially just boxes and that both coffins and caskets can be customized in a variety of ways, include things such as jewels, engravings, pockets to hold pictures and trinkets for the deceased, and any other specialized details, the main difference between a coffin and a casket is essentially just the shape.  Although, a casket may still refer to a jewelry box or the like and need not necessarily be referring to a box to bury a body in.