Origin of the Phrase “Dead Ringer”

May 22, 2014 Emily Upton
Dustin asks: Where did the expression “dead ringer” come from? 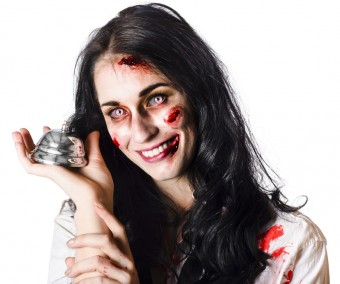 You have probably heard the often-repeated story about how the original “dead ringer” was a person believed to be dead who was then buried alive. For various reasons, there is a good amount of evidence that being buried alive wasn’t the most uncommon thing in the world until relatively recently in human history (particularly as nobody used to want to exam the diseased deceased too closely). So there were cases of people being buried alive accidentally.

Indeed, in 1896 T.M. Montgomery, who was supervising the disinterment of remains at the Fort Randall Cemetery, reported that a little over 2% of those bodies exhumed were definitely victims of being accidentally buried alive.  In other words, about 2% woke up, tried to claw their way out, and were unable to do so.  Given the oxygen supply in a coffin doesn’t last that long, it is likely the actual percentage of people buried alive was higher, when you include the ones who didn’t wake, but were still technically alive when buried.

In any event, to prevent deaths by burial, a string would supposedly be attached to the finger of the person presumed dead, and it was attached to a bell on the other end above ground. When the person moved, the bell would ring. And that was what you would call a “dead ringer.”

The truth is, though, “dead ringer” doesn’t have anything to do with people being buried alive, as you perhaps guessed considering the preceding origin theory does nothing to explain the reason why the phrase now means “an exact duplicate or replica.” Instead, actual documented evidence points to a different story entirely: horses.

In the 1800s, a “ringer” was a stand-in for a horse at a race. Sometimes, people would clandestinely replace a slower horse with a faster horse or vice versa for later betting purposes. Of course, the horses had to look very similar in order for this con to be pulled off.

In 1882, an article published in the Manitoba Free Press described this: “A horse that is taken through the country and trotted under a false name and pedigree is called a ‘ringer.'”

The word “ringer” started out as a word for someone who rang bells, such as the bells in a church. The jump from ringing bells to switching out horses probably seems like a big one, but in the early 1600s another phrase appeared that helps sort it all out. That phrase is “ring the changes,” today meaning “to do something in a different way in order to make it more interesting.” Originally, this simply meant that the bell ringer was ringing a pattern of bells that included all variations and eventually brought the ring back to its starting point.

However, a variation of “ring the changes” cropped up by the 18th and 19th centuries which meant “substitute counterfeit money for good.” From there, it is easy to see why the term “ringer” would be applied to a horse that was secretly substituted in for another in horse racing.

The horse ringers obviously were not dead, though, or they wouldn’t be able to race. In this case, the word “dead” is used to mean “exact or precise,” as with many other phrases that use the word, such as “dead centre.” This meaning has been around since the 16th century, though exactly how the word’s meaning morphed from actual death to “exact” isn’t known.

“Dead” was added to “ringer” soon after ringer started being applied to horses. The first known published case of “dead ringer” appears in the Oshkosh Weekly Times in June 1888:

“Dat ar is a markable semlance be shoo”, said Hart looking critically at the picture. “Dat’s a dead ringer fo me. I nebber done see such a semblence.