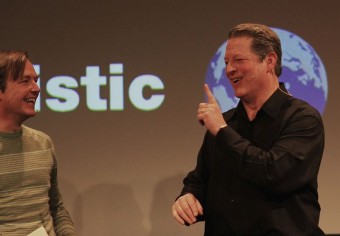 One of the things Al Gore gets made fun of most often in popular media tends to be the misconception that he at one point supposedly said he invented the internet. Now, all politics aside, whether you hate/mildly dislike/like/love/are indifferent to Al Gore, he doesn’t really deserve to be made fun of for this one; not only because he really didn’t ever say that, but also because he really did play a significant role in the creation of the internet and the World Wide Web.

Let’s look at the actual quote from which he supposedly said he invented the internet, from a March of 1999 interview with Wolf Blitzer (full transcript can be found here):

Blitzer: “… Why should Democrats, looking at the Democratic nomination process, support you instead of Bill Bradley, a friend of yours, a former colleague in the Senate? What do you have to bring to this that he doesn’t necessarily bring to this process?”

First, remember that he’s a politician and, in political context, the word “initiative” has a slightly different meaning than is typical outside of politics. Specifically, in non-political context, it means something to the effect of: “an introductory act or step which leads to some action”. In political context, however, it means either “a procedure by which a specified number of voters may propose a statute, constitutional amendment, or ordinance, and compel a popular vote on its adoption” or “the general right or ability to present a new bill or measure, as in a legislature.” Obviously, Gore was speaking in terms of the latter and his opponents wanted people to believe he was speaking in terms of literally creating the internet himself.

Unfortunately for them, Gore really did “take the initiative”, as he stated. As Vincent Cerf, the “Father of the Internet” said, “The Internet would not be where it is in the United States without the strong support given to it and related research areas by the Vice President in his current role and in his earlier role as Senator… As far back as the 1970s, Congressman Gore promoted the idea of high speed telecommunications as an engine for both economic growth and the improvement of our educational system. He was the first elected official to grasp the potential of computer communications to have a broader impact than just improving the conduct of science and scholarship…  His initiatives led directly to the commercialization of the Internet. So he really does deserve credit.”

Indeed, even former Republican speaker of the U.S. House of Representatives, Newt Gingrich, stated: “In all fairness, it’s something Gore had worked on a long time. Gore is not the Father of the Internet, but in all fairness, Gore is the person who, in the Congress, most systematically worked to make sure that we got to an Internet…”

But even though he did all that and could rightly say he played a part in the early creation of the Internet, in this quote from Gore, “I took the initiative in creating the Internet”, he was most likely referring to a specific initiative, namely the High Performance Computing and Communication Act of 1991, which is also known as “The Gore Bill”. Gore originally started crafting this bill in 1988 after hearing a report “Toward a National Research Network”, which was submitted to congress by a group of UCLA computer science professors, including Leonard Kleinrock who was one of the original creators of the ARPANET, the predecessor to the Internet.

Gore’s bill eventually passed on December 9, 1991 and led to, among a lot of other things that contributed to the growth and creation of the Internet, the National Information Infrastructure (NII), which Gore referred to as the “Information Superhighway”. Basically, this was a proposed “advanced, seamless web of public and private communication networks, interactive services, interoperable hardware and software, computers, databases, and consumer electronics to put vast amounts of information at users’ fingertips.”

This bill also ended up resulting in providing funding to Marc Andreessen, the inventor of the Mosaic Web Browser. Without this grant, there would have been no Mosaic Web Browser. Why is this important? Because the Mosaic Web Browser’s release took the World Wide Web from a fledgling technology used by very few people and rocketed it into the most popular information sharing model on the Internet. Prior to Mosaic’s launch, the web was much less popular than older protocols for dealing with files on the internet, such as Gopher and Wide Area Information Servers.

Unlike many of the existing web browsers of the day, Mosaic was very easy for non-technical users to install on a variety of systems. The creators also offered 24 hour phone support to help people setup the browser on their particular system. They also offered great continual support for bug fixes and the like, something that was lacking in a lot of other browsers. Another feature it had that distinguished it from other browsers was that it included the ability to view web pages with inline images, instead of having them load in separate windows, as other web browsers at the time. Mosaic’s popularity declined with the release of Netscape Navigator, but it was the browser that is credited with spurring the popularity of the World Wide Web, which was one of the “Killer Apps” of the Internet.

The other thing the media and Gore’s opponents did was change the word “create” to “invent”. These two words mean similar things, but with a very key distinction that is important, particularly in cases like Gore’s quote. Had he used “invent”, his opponents might have had a leg to stand on. “Invent” implying “to devise by thinking” or “discover”. Gore certainly didn’t think up or discover the Internet or the World Wide Web.

On the other hand, “create” has a slightly different meaning: “to produce or bring about by a course of action or behavior” or “to bring into existence”. Gore absolutely helped “bring about by a course of action or behavior” the Internet and the World Wide Web which runs on top of it. This is why most opponents of Gore changed the wording to say that he said he “invented” it, because he did not do that and thus would look like a liar. His opponents knew that most people don’t look into these things and the main stream media knew that by going along with this, the story would get better ratings.

*For reference, so nobody thinks this article is coming from a fanatical supporter of Gore, I was on the “indifferent” and occasional “mildly dislike” end of things when it came to Gore before, but since researching this article have upgraded more towards a solid “indifferent”, due to learning of his constant political support of quite a lot of nerdy things in his time in politics.