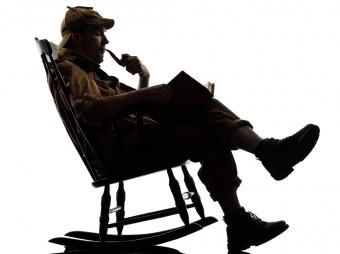 “Elementary, my dear Watson“, sometimes quoted as, “Elementary, dear Watson“, is one of those phrases that everybody knows the character of Sherlock Holmes said. You know, just like everyone knows that Kirk said “Beam me up Scotty” and Darth Vader said, “Luke, I am your father”. The thing is, none of those characters ever said any of those things. They said things that were similar, sure, but they never actually said those exact words, despite the fact most think that they did.

Like “Luke, I am your Father“- which was actually, “No, I am your father“- Holmes never said “Elementary my dear Watson” in any of the original 56 short stories or 4 novels starring his character. The closest he comes is in, The Adventure of the Crooked Man.

In this story, Holmes uses both the word “Elementary” and the phrase, “my dear Watson“, in somewhat close proximity. The two, however, are not uttered together:

“I have the advantage of knowing your habits, my dear Watson,” said he. “When your round is a short one you walk, and when it is a long one you use a hansom. As I perceive that your boots, although used, are by no means dirty, I cannot doubt that you are at present busy enough to justify the hansom.”

Beyond that, there are only 7 other instances of the word “elementary” being uttered in the official Sherlock Holmes works, though he does say “my dear Watson” numerous times, with the phrase appearing in about 2/3 of the stories, sometimes several times within a given story.

It’s noted by Sherlockian.net, one of the foremost sources on everything to do with Sherlock Holmes, that although Holmes never uses the oft misquoted phrase, “elementary, my dear Watson“, he does use the phrase, “exactly, my dear Watson” in 3 different stories. For example in His Last Bow, where Holmes uses the phrase in a shoddy attempt to mask the obvious sexual tension between himself and his man servant… Or, you know, to agree to Watson’s point.

So where did the phrase “Elementary, my dear Watson” come from? Well the first known, or at least recorded use of the phrase was in the 1915 novel, Psmith, Journalist written by P.G. Wodehouse. We should point out that the book in no way shape or form stars Sherlock Holmes (in fact, the Sherlock Holmes stories were still being published at this point). We should also point out that, though Psmith, Journalist was published as a novel in 1915, it was a serial before that, putting the date of the first known usage of the phrase as 1909.  The exact first known instance of the “Elementary, my dear Watson”, which appears in that work is as follows:

“I fancy,” said Psmith, “that this is one of those moments when it is necessary for me to unlimber my Sherlock Holmes system.  As thus.  If the rent collector had been there, it is certain, I think, that Comrade Spaghetti, or whatever you said his name was, wouldn’t have been.  That is to say, if the rent collector had called and found no money waiting for him, surely Comrade Spaghetti would have been out in the cold night instead of under his own roof-tree.  Do you follow me, Comrade Maloney?”

Wodehouse’s work was noted to have taken obvious cues from Doyle’s, as you probably guessed from the fact that Wodehouse ended up writing one of the most enduring quotes for a character he didn’t create.

Another theory sometimes put forth is that it was perhaps the stage actor, William Gillette in 1899, preceding not only Clive Brook’s 1929 film, but also the P.G. Wodehouse serials quoted above. Though this could potentially be true, evidence that has survived to today points to Gillette using a slight variation on the phrase in one of his stage productions, rather than the exact phrase. The production, aptly called, Sherlock Holmes: A Drama In Four Acts which was written in part by Gillette in 1899, features a line that read as follows, “Elementary, my dear fellow! Ho! (*Sneer) Elementary“.

This is noted as being a bastardized version of the “Exactly, my dear Watson” line Doyle used in his own work several years earlier and the line used by Brook 30 years later is noted to be a natural evolution of Gillette’s own line.