March 9, 2015 Melissa
Romi asks: They said on a documentary on Netflix I watched that the battle of Gettysburgh started as a fight over shoes. Is this true? 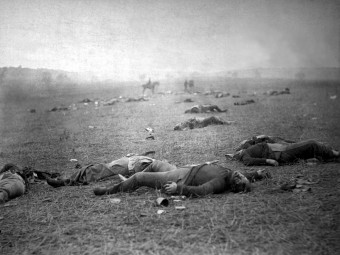 Marking the Confederacy’s last stab at a major offensive in a northern state, the three brutal days of fighting in July of 1863 around the town of Gettysburg, Pennsylvania mark the bloodiest battle of the American Civil War. Situated at the junction of 10 roads at a time when most places were served by one or two, and only about 30 miles from two key Union supply routes, it shouldn’t be surprising that Union and Confederate troops ran into each other there. What is surprising, however, is that many historians believe the battle played out the way it did because of a strong Confederate desire for new shoes.

Leading up to the battle, on June 22, 1863, Confederate Major General Jubal Early had crossed the Potomac River at Shepherdstown, WV. Moving on to Chambersburg, PA, on June 25, Early received instructions from Lieutenant General Richard Ewell to move east through Gettysburg to York, PA. There, he was to cut-off a major rail-line between Harrisburg and Baltimore, and then continue east to Wrightsville, to destroy a significant bridge over the Susquehanna River that connected the region to Philadelphia.

Early travelled with 15 empty supply wagons with the hope of re-fitting his division, and on June 26, 1863, his command reached Gettysburg where small numbers of Union troops were encamped. Sending a brigade, under the command of Brigadier General John B. Gordon, and a battalion of cavalry led by Colonel E.V. White to root out the enemy (which they did), Early himself entered the town on the same day.

Although Early had hoped to re-supply his division, Gettysburg authorities were insistent that they had few available supplies. Unimpressed, Early conducted a search, but was only able to find a “very small quantity of commissary supplies,” and about 2,000 rations. Early noted there were no apparent warehouses (called railroad buildings), and having a date to keep with a rail-line and a bridge, he left town early the next day. Early reported that he had had insufficient time to determine with certainty that there were no hidden supplies, but in his opinion, if there were any, they were “limited.”

Two days later, in the town of York, Early (still seeking supplies) was able to requisition (demand) from the town between 1,200 and 1,500 pairs of shoes, as well as socks, hats, rations, and more than $28,000 dollars. Early and his troops also successfully took control of the railroad at York, burned the Columbia Bridge at Wrightsville, and proceeded to destroy other depots and bridges in the area, although his continued pursuit for additional supplies bore little fruit. On June 29, 1863, Early was ordered by General Robert E. Lee, along with the rest of the Army of Northern Virginia (about 75,000 troops), to join forces around Gettysburg.

Major General Henry Heth led one of those divisions, and like all of Lee’s troops, was under specific orders to wait for the arrival of the full force before engaging in any fighting. Heth was among the first to arrive at Gettysburg on June 30, 1863.

Perhaps because they were sorely in need of them, a rumor had been circulating among Lee’s forces that there was a stockpile of shoes in the town, and shortly after arriving, Heth, in fact, ordered Brigadier General Johnston Pettigrew to “search the town for army supplies (shoes specifically), and return the same day.” Pettigrew ran into Union troops, and, despite Lee’s orders, Heth ended up starting a small skirmish.

Rather than risk losing Heth’s division, Lee was forced to send in support, which prevented him from carrying out his plan of uniting the entire army in a single large force before meeting the enemy. Subsequently, on that first day, fighting occurred at Seminary Ridge, Oak Ridge, Oak Hill, McPherson’s Ridge and Barlow’s Knoll.

July 3, 1863 saw fighting at Culp’s Hill and Cemetery Ridge, as well as the dramatic and devastating Pickett’s Charge (composed of three Confederate divisions, one each commanded by Major General George Pickett, Brigadier General Pettigrew and Major General Isaac R. Trimble, and all under the command of Lieutenant General James Longstreet). Ineffective and bloody, it is estimated that of the 12,000 or so Confederate troops who participated in the charge, approximately 1,100 were killed in battle, another 4,000 or so wounded and an additional 3,700 were captured by the Union. When later asked who was responsible for the resounding defeat, General Picket is rumored to have replied, “I always thought the Yankees had something to do with it.”

When the fighting was over, more than 51,000 soldiers had been killed, wounded, captured or were missing. While dedicating the site as a National Cemetery, President Abraham Lincoln praised the fallen by noting that they “gave their lives that the nation might live.”