How Did Lunar Landers Re-Launch When There’s No Oxygen?

March 6, 2015 Melissa
Brian S. asks: How did they get the space ships on the moon off when there is no oxygen there? 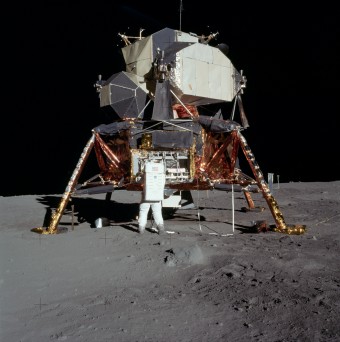 Whether it’s two-strokes or four, one cylinder or eight, most of the engines we use today are powered by the internal combustion of fuel and air; however, mixing gasoline and oxygen isn’t the only way to generate the energy needed to propel a craft, and in fact, sometimes it’s the least efficacious choice.

In the typical gasoline-fueled car engine, power is produced in the cylinders, each of which is comprised of a shaft with a tightly-fitted piston that moves down to draw in air and gasoline. As the intake valve closes, the piston moves back up, compressing the mixture and increasing its temperature (and thereby, efficiency). When the plug sparks, the gasoline is ignited, and the released heat and energy in the ensuing explosion drives the piston back down.

On the other end of the piston (opposite the intake valve and spark plug) is a connecting rod that is attached to the crankshaft. Thus, when the piston is forced down, it pushes the rod, which moves the rotating crankshaft. This process works so well that it has been replicated hundreds of millions of times in everything from chainsaws to Ford F-150s.

However, this method of producing energy relies on oxygen present in the atmosphere to combine with the carbon in the gasoline. In space, of course, the reason no one can hear you scream is because there’s no air (or oxygen). Enter rockets.

A rocket doesn’t rely on a crankshaft, but rather on the expulsion of something, be it gas, liquid, solid or simply radiant energy, through a small opening (nozzle). Therefore, unlike a truck that doesn’t need to carry its oxidizer since it can draw air from its surrounding environment, ships with rocket engines have to carry all of their propellant with them.

Of course, it would be impractical (if not impossible) to haul enough gaseous oxygen up into space to have a meaningful flight. To get around this problem, alternatives have been developed, primarily in the forms of solid and liquid propellants.

Solid propellants come in two main types – homogenous and composite. With both, the fuel and the oxidizer are stored together, and power is produced when the two are ignited.

Homogenous solid propellants are unique in that both the oxidizer and the fuel exist together as a single, unstable compound, either as simply nitrocellulose or together with nitroglycerine.

On the other hand, with composite solid propellants, the fuel and the oxidizer are distinct materials that have been combined into a powdery or crystallized mixture, which is commonly comprised of ammonium nitrate or chlorate, or potassium chlorate (as the oxidizer), and some type of solid hydrocarbon fuel (similar to asphalt or plastic).

Solid propellants have long been used with launch vehicles, including the Space Shuttle’s launch boosters that each produced 3.3 million pounds of thrust.

With liquid propellants, there are three main types: petroleum-based, cryogenic and hypergolic. All three of these propulsion methods store their oxidizers and fuels separately until thrust is needed. When rockets fueled with a liquid propellant are fired, a bit of each (fuel and oxidizer) is introduced into a combustion chamber where they combine and ultimately explode – producing the necessary power.

Petroleum-based liquid propellants, as the name implies, mix together a petroleum product (like kerosene) with liquid oxygen, which, being highly-concentrated, renders it an efficient and powerful propellant. As such, this method was widely used for many rockets, including the first stages of Saturn I, IB and V, as well as Soyuz.

Another liquid propellant relies on cryogenic (super low temperature) liquefied gases; one common method mixes liquefied hydrogen (the fuel) with liquefied oxygen (the oxidizer). Highly efficient but difficult to store for long because of the need to keep both so cold (hydrogen stays a liquid at -423F, and oxygen at -297F), cryogenic propellants have been used only in limited applications, although those include the main engines of the Space Shuttle and certain stages of the Delta IV and some of the Saturn rockets.

With both petroleum-based and cryogenic propellants, some type of ignition is required, either via pyrotechnic, chemical or electrical means; however, with the third type of liquid propellant, hypergolic, no ignition is necessary.

Common hypergolic fuels include different forms of hydrazine (including unsymmetrical dimethylhydrazine and monomethylhydrazine), while nitrogen tetroxide is often used as the oxidizer.

Liquid even at room temperature, hypergolic propellants are easy to store, which together with their spontaneous combustibility make them highly desirable for a number of applications, such as in maneuvering systems. Therefore, even though the materials involved are highly toxic and corrosive, hyperbolic fuels have been frequently used, including in the Space Shuttle’s orbital maneuvering system and, pertinent to the question at hand, the Apollo lunar module (LM).

Four subcontractors worked under the lead contractor, Grumman Corporation, to build the LM, with Bell Aerosystems Company selected for the development of its ascent propulsion. Work began on the project in January 1963, yet engineers were still tinkering with the ascent engine as late as September 1968, when Bell’s initial propellant injector was switched out for one designed by Rocketdyne, the subcontractor that also built the descent engine.

Driven by a non-gimbaled, fixed-thrust engine and powered by Aerozine 50 fuel and nitrogen tetroxide oxidizer, the hypergolic materials that provided the thrust necessary to get the LM off the Moon’s surface were so corrosive that they burned through the engine each time they were fired (requiring the engine be rebuilt). As a result, none of the ascent engines for any of the LMs were tested or fired prior to lifting the Apollo astronauts off of the Moon.