The Origins of Aunt, Uncle, Brother, Sister, Mom and Dad 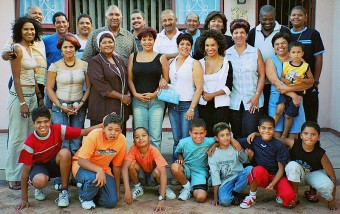 In case you ever wondered how your relatives came to be called what they are, here’s a brief history.

The modern English word for a parent’s sister, “aunt,” is a direct descendant of the Modern French word of the same meaning, tante. Both derive from the Latin word, amita, meaning “paternal aunt,” and the word is associated with the Greek word for “mother,” amma. Amma was also found in Old Norse, but it meant “grandmother,” and a variant, ammait, was present in Middle Irish, but it meant “old hag.”

Around since the late 13th century, the first recording of “aunt” is found in Robert of Gloucester’s Chronicle (1297) where he wrote, “Sir Gui de Mountfort, that was . . his aunte sone.”

Uncle is also derived from a French word of the same meaning, oncle, and like aunt, your parent’s brother’s moniker has also been around since the 13th century. The Old French word was itself a child of a Latin word, avunculus, which meant “mother’s brother,” or literally, “little grandfather.” First appearing in print about 1290 in a collection of legends of southern England with “To hi vncle he gan go . . Erchebischop of caunterburi,” Robert of Gloucester also had the word in his Chronicle in 1297.

Brother has its roots in the Proto-Germanic word brother, which itself derives from the Proto-Indo-European root bhrater. This word is found throughout Indo-European languages including Sanskrit, Old Persian, Latin, Welsh, Old Irish, Czech and Greek. According to the Oxford English Dictionary (OED), this ancient name for your male sibling has been found in writing since the 9th century, when it was included in the Anglo-Saxon Chronicle (656 AD) as “Min broder is faren of pisse liue.”

Interestingly, the colloquial “bro” may be older than you thought. It first popped up in the 17th century where it appeared in a diary as “I accompanyd my Eldest Bro (who then quitted Oxford) into the Country.”

Also from the 13th century is the word for your female sibling, sister, which descends from the Old English sweostor and swuster, and is related to the Scandinavian words systir (Old Norse), syster (Swedish) and søster (Danish), and the Old Saxon swestar, Old Frisian swester, Dutch zuster and Gothic swistar. Like the name for a male sibling, sister is present in nearly all modern Indo-European languages. The Old English form of sister was first recorded about 900 AD in the Anglo-Saxon Chronicle with “Hæfde hine Penda adrifenne . . forpon he his swoster anforlet.”

The colloquial “sis” is found as far back as the 17th century where it appeared in a letter in the sentence, “We had need call a councell for marrying and giving in marriage, you for your sis, she for hers, and I for mine.”

“Mom” is an American word that first appeared in the mid-19th century, in the November edition of Spirit of Times with “‘Mom. D’yer ‘spose this nag don’t know his pace?'” Its parent is widely believed to be the much older word “mamma,” which can be traced back to the 1500s in English. This, in turn, can be traced back to Latin where “mamma” meant “breast” or “teat.” From this word, we also got the word “mammalia” and later “mammal” to describe animals that suckle their young.

“Mother” is an old word with roots in Old English (modor) and Proto-German (mothær). Related to Old Frisian (moder), Old High German (muoter) and Latin (mater), its spelling in English with the “th” dates to the 16th century and William Shakespeare, who wrote in Love’s Labour Lost, “Then was Venus like her mother, for her father is but grim.”

Dad is older than mom and was first recorded in the 16th century in Wilson’s Arte of Rhetorique, with “Bryngyng for the a faire child unto you . . such a one as shall call you dad with his swete lisping words.” Some experts believe this short word for your male parent is even older than this, as words of the same meaning, tad, daid, tata and tete, were all present in Welsh, Irish, Greek and Lithuanian, respectively, since long before then. (If you’re wondering the leading theory as to WHY we call parents this and why such similar names for parents are seen across otherwise unconnected cultures, see: Why We Call Our Parents Mom and Dad)

This might leave you wondering where the more formal “father” came from. This derives from the Old English fæder that meant “he who begets a child,” which itself came from the Proto-Germanic fader. These and their variants first appear in print in the 9th century, such as Vespers Psalter’s “Fordon feder min & modur min forleorton mec.” Spelling “father” with a “th” is believed to have begun in the 15th century, although its first appearance in print is found in Havers’ translation of Il Cardinalismo di Santa Chiesa, as “Ginetti . . proved his Fathers own Son.”

And note, don’t tell yours, but one of the alternate meanings of fæder in the late Old English period was “the Supreme Being.”