This Day in History: December 11th- The End of Louis 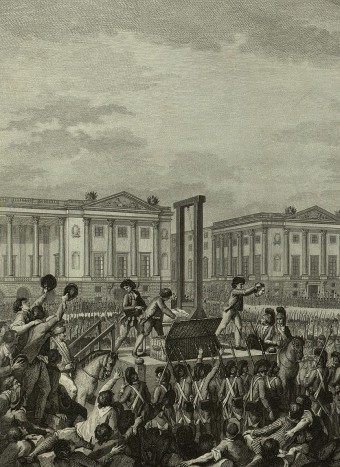 On August 13, 1792, during the height of the French Revolution, Louis XVI was arrested. He was taken to a Paris fortress being used as a prison called the Temple to await his fate. (He probably had a pretty good idea of what it would be; it was more a matter of when it would happen.)

The National Assembly abolished the monarchy the next month and declared France a republic. One of the decisions that had to be made was what to do with the newly deposed king.

There was some disagreement as to the best course of action. The Girondins were in favor of keeping the ex-monarch prisoner indefinitely – as a hostage in case his existence was to come in handy in the future. The more radical members of the Assembly, known as the Mountain, argued in favor of Louis’ immediate execution.

Putting the deposed king to death without even a show of due process didn’t sit well with many of the deputies who had legal backgrounds. They took a vote, and it was decided that Louis would be tried before the National Convention.

The ex-king was taken from the Temple on December 11, 1792, and led through the streets of Paris crowded with silent throngs that were once his subjects. He stood before the Convention to hear the indictments against him (there were many, not surprisingly). Louis’ legal team delivered his response to the charges on December 26, and the Convention buckled down to decide the verdict.

It was not the foregone conclusion one may assume. Although there were those in the National Convention that believed as ordinary Parisians did that the ex-king’s demise would only further the Revolutionary cause, others disagreed.

One of these dissenters was American Thomas Paine, a French hero for his role in the American Revolution, and a member of the National Convention. Paine saw no reason to execute Louis and voted against it. He was in favor of allowing the disgraced king to live in exile in America (perhaps because he’d been so supportive of his country’s revolution?)

No matter. On January 20, 1793, the Convention voted 380 to 310 in favor of executing the deposed monarch. The next day, Louis met his death by guillotine with grace and dignity. The slice of the blade ended 800 years of his family’s rule in France.