This Day in History: December 12th- The Leicester Codex 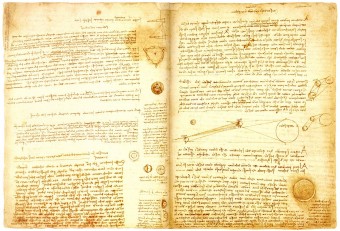 When an ordinary person doodles, the results eventually get tossed in the trash without a second thought. But when one of the greatest artists of the Renaissance era’s hastily scribbled drawings are discovered in centuries-old notebooks, they cause multi-million dollar bidding wars.

And so it was that on December 12, 1980, Armand Hammer, the president of Occidental Petroleum Corporation, shelled out a cool $5,126,000 (about $14.3 million today) at Christies in London for a manuscript by Leonardo da Vinci dating from 1508. It was comprised of 72 loose pages featuring notes and drawings by the legendary master, all focused on water – how it looked and how it moved. Experts believe he was researching to paint the background for his masterpiece, the Mona Lisa. The text was written right to left – a classic example of da Vinci’s trademark mirror-writing technique.

This treasure was uncovered by painter Giuseppi Ghezzi in 1690, who came across it among the belongings of Guglielmo della Porto, a sculptor from Milan who had studied da Vinci’s work. In 1717, Thomas Coke, the first Earl of Leicester, purchased the manuscript and added it to his impressive art collection in England.

Two hundred years later, hard times had fallen upon the Coke family, and the current Lord Coke found himself selling off the family’s art collection to pay his estate taxes. On the auction block was the da Vinci manuscript, which was by then known as Leicester Codex. Art experts predicted Coke could walk away with $7 to $20 million after the auction on December 12, 1980.

Well, not quite. Armand Hammer and two other bidders started at $1.4 million, and in less than two minutes Hammer was the proud owner of the Leicester Codex for the low, low price of $5.12 million (actually the highest sum paid for any manuscript up to that date.) “I’m very happy with the price. I expected to pay more,” Hammer said. Lord Coke had expected the buyer to pay more too, as the price didn’t even cover the amount of tax he owed. The manuscript’s new owner promptly renamed it the Hammer Codex and added it to his priceless art collection.

After Armand Hammer passed away in 1990, he bequeathed the da Vinci notebook and other valuable artwork to Hammer Museum of Art and Cultural Center at the University of California in Los Angeles. The manuscript was put up for sale several years later to cover legal fees incurred when Hammer’s estate was sued by his late wife’s heir.

The manuscript changed hands once again on November 11, 1994, when an anonymous bidder bought the Hammer Codex for a new record-setting price of $30.8 million (about $48 million today). The anonymous buyer’s identity was soon revealed to be Bill Gates. Gates restored the original name to the manuscript – the Leicester Codex – and loans the piece to museums for public display.