The Evolution of the French Language 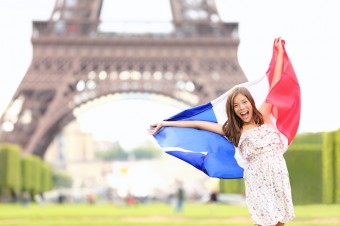 Centuries in the making, Modern French owes its existence to a strange combination of conquest, evolution, authoritarian control and revolution.

Long before it was France, Gaul (as it was known to the Romans) was occupied by a variety of Celtic tribes. After Julius Caesar conquered it in the 1st century BC (veni, vidi, vici), native Celtic tongues were supplanted by a popular form of colloquial Latin, derived from the classical language of the elite, known as vulgar Latin.

In the 4th century AD, a series of Germanic tribes, including the Burgundians, the Visigoths and the Franks, began invading. Intermixing their Germanic dialects with the vulgar Latin of the indigenous population, dozens of lingua romana rustica, each reflecting the unique language combination of its locality, came about.

When the Franks under Clovis emerged as the dominant force in France in the 5th century AD, Frankish became the language of the aristocracy. Although few others spoke it at the time, Frankish influence on modern French can still be seen today in words such as blanc, bleu, guère, brun, fauve and trop.

The first record of Old French is Le Serment de Strasbourg, an oath declaring an alliance between the Holy Roman Emperor Charles II and Louis the German in 842. However, among the French people, most still primarily spoke (less than 1% could write) their local lingua romana rustica, and these varied dramatically both nationally and even regionally.

Of course, other influences came to bear as well, and in the northeast, Germanic tongues such as Flemish and Alsatian, were still spoken, while in the southwest, Basque and other dialects were common.

In fact, the Old French we know was spoken only in the Île-de-France (the provinces surrounding and including Paris). A complex language, it was difficult to master with its 33 vowels, 16 diphthongs and a variety of other sounds that were difficult to pronounce.

Nonetheless, one of the greatest works of the French literary tradition, the Song of Roland, was written during this period in the 11th century.

Luckily, the language evolved, and by the 16th century, French had been greatly simplified. Most of the diphthongs were eradicated and sentence structure became more standardized. Nonetheless, written French retained many of its Latin features, and between those differences and the vast illiteracy of the people, only about 2% of the populace could read and write Middle French.

One giant leap in bringing French to the people occurred in 1539 when King François I issued the Ordinance of Villers-Cotterêts, decreeing that French, not Latin, would be the official language of the country. Although this ensured that administrative records and court proceedings were henceforth recorded in French, most people outside of France’s most elite circles still spoke, and conducted their business in, their local language (also called a patois).

Nonetheless, the language was becoming more popular and publishers were eager to print works in French, although few knew the language’s complex grammatical rules. The resulting situation had consequences we bear today:

It is to this period that today’s French owes its excessively complicated spelling . . . [Authors] left things up to the typographers, who were paid based on word length! The typographers strove to make things more learned and complex . . . . These trendsetters . . . introduc[ed] among other things the cedilla, the apostrophe, and accents. . . .

Historians divide the development of Modern French into several eras.

During the second half of the 17th Century, under the guidance of powerful leaders such as Cardinal Richelieu and the Sun King, Louis XIV, France enjoyed a period of prosperity known as the Grand Siècle. In order to consolidate their absolute power, centralization and standardization became key. In 1635, Richelieu established the Académie française to promote and police the French language.

The Académie’s grammarians set about the task of keeping the language pure. As a result, many words previously used, particularly those unique to the provinces or borrowed from another language, were expunged. Written and spoken French became more practical and less flowery, and the requirement to leave the plural “s” silent was established.

By 1714, French, which had become the primary language of the aristocracy, was used in an international agreement for the first time with the Treaty of Rastatt. From then until World War I (1914-1919), French remained the language of international diplomacy. As the Holy Roman Emperor Charles V described it:

I speak English to merchants, Italian to women, French to men, Spanish to God and German to my horse.

With the rise of English power after the Treaty of Paris (1763), the revolutionary ideas of its greatest political thinkers such as John Locke had a tremendous influence on French thought and philosophers, including Jean-Jacques Rousseau and Voltaire. In addition to stirring up revolutionary ideas about liberty, natural law and the rights of man, these influential Englishmen also contributed to the French vocabulary.

In addition, as transportation improved and people travelled between the cities and countryside for work and commerce, French increasingly became more common and began to supplant local patois. At the same time, improved travel meant greater foreign influence, and as a result, a variety of German, Italian, Greek, Latin and Spanish words entered the French lexicon.

Nonetheless, neither France’s monarchy nor the Catholic Church had any interest in teaching the general populace its national language, to the point where church activities were held in patois and formal instruction was still given in Latin.

After the storming of the Bastille on July 14th, 1789, the people began the hard work of creating a Republic. Many believed the best way to effect this was to unite the French people with a common language. As one republican said:

The monarchy had reasons for clinging to the Tower of Babel. In a democracy, keeping citizens ignorant of the national language, unable to control power, is a betrayal of the motherland .. . In a free country, the language must be the same for one and all .. . .

In fact, one such leader, Abbé Grégoire, saw the standardization of the language as an inevitable necessity:

The local dialects, the patois of six million French people who do not speak the national language, will gradually disappear because – and I can’t say it often enough – it is more important politically to eradicate this diversity of coarse idioms, which prolong the infancy of reason and the age of prejudice.

During the Reign of Terror, the desire to fight against: “les idioms anciens, welches, gascons, celtiques, wisigots, phocéens et orientaux” reached a peak and, in early 1794, a decree issued, directing the immediate (within 10 days) appointment of French speaking teachers in all districts where French was not spoken. Although some of the stricter requirements proposed during the Terror were eventually abandoned, ultimately, these measures led to French, alone, being the official language in all schools.

By the 1880s, free and mandatory education was established throughout France by the Jules Ferry laws, which incorporated the requirement that instruction be given in French. Today, France enjoys a 99% literacy rate.

History of the French Language (SLMC)