October 13, 2014 Melissa
M. Seager asks: Why do Americans write dates Month/Day/Year and most others Day/Month/Year? 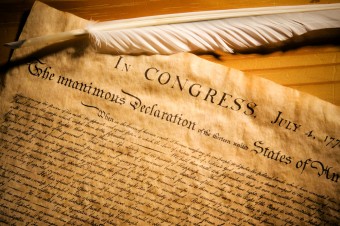 In the United States, the date format begins with the month and ends with the year (MM/DD/YYYY), and this arrangement is relatively unique. In most of the rest of the world, the day is written first and the year last (DD/MM/YYYY), although in some places like China, Korea and Iran, this order is flipped (YYYY/MM/DD).

Regardless, no one seems to know why Americans first started putting the month first. It has been hypothesized that it is simply because at certain times it’s more convenient to first know the month than the day for context, and year being less significant to know first in some contexts has it ending up last. Thus, before people were too overly concerned with the likes of spelling, grammar, and conventions such as this, they just wrote it as was most convenient in whatever context.

This idea, however, has little in the way of direct, documented evidence backing it as a potential origin, with the best such support simply being that some of the first instances of the month / day / year format showing up also sometimes has in the same document, written by the same author, the more common day / month / year format. In fact, in at least one case we found, both formats even occurred in the same sentence!

That said, beyond pure speculation, how this practice definitively started is anybody’s guess at this point, but what is clear is United States citizens have been doing it as long as there has been a United States.

To wit, one of the earliest examples I found is on the Declaration of Independence, with its large “July 4, 1776” inscribed at the top –a format that was copied by John Dunlap, the printer who made the 200 broadsides that were later distributed in the colonies. (Interesting side fact, the Declaration of Independence was not signed in July as is commonly stated, but rather in August of that year.)

Apparently the founders were fond of this format, as it is seen on at least some of the Federalist Papers, as well as the Constitution, signed by 38 of the delegates to the Constitutional Convention on “September 17, 1787.”

During the Civil War, although President Lincoln wrote the date formally in his hand-written draft of the Emancipation Proclamation, in the first printed version, it was written at the top “January 1, 1865.” Note that the date was a typo, as the Proclamation was to become effective on January 1, 1863.

In the Articles of Agreement Relating to the Surrender of the Army of Northern Virginia, the document that officially ended the Civil War, “April 10, 1865” is written at the top, but then in General Lee’s order dismissing his troops, he wrote “10th April 1865.”

By the last quarter of the 19th century, Mark Twain was writing the date month-first in his correspondence with friends, and by the early part of the 20th century, American newspapers reporting on the sinking of the Titanic had the month-first as well.

Of course, for the most famous speech of his career, President Franklin D. Roosevelt put the month first when he intoned, “yesterday, December 7, 1941 – a date which will live in infamy.”

By the latter half of the 20th century, month-first appears to have become standard for much of the country, as memorialized by the famous CBS news anchor, Walter Cronkite, who signed off from every broadcast with “and that’s the way it is,” and then day of the week and the date, month first.

Although we find it normal, our month-first arrangement to the rest of the world makes little sense, being what one commentator has called middle-endian (computer speak for bass-ackwards).

When it comes to bytes of numbers, the first (left) digit is usually the most significant and will have the greatest value (e.g., if you had a numeric number 1,234, the “1” represents 1000 – by far the largest value in the number). This is the same with dates, where the year, which represents 12 months and 365 days, has the greatest “value,” and the day, the lowest.

In putting dates into bytes, in the big-endian format it would be written as YYYY/MM/DD, while in the little-endian format, it would read DD/MM/YYYY. By putting the month first, we’ve screwed this orderly system up by putting the middle value on an end (middle-endian) – and annoyed a large portion of the planet in the process.

Interestingly, computer programmers didn’t invent the term endian, they borrowed it from Jonathan Swift’s Gulliver’s Travels (1726). In Chapter 4, Gulliver learns that a source of discord among the Lilliputians and the Blefuscuans was a royal decree regarding the proper way to break into a soft-boiled egg:

The emperor . . .published an edict, commanding all his subjects, upon great penalties, to break the smaller end of their eggs.

Some of the populace resented this, and a bloody war ensued between the big-endians who wanted to be free to break their eggs as they chose, and the little-endians who followed the emperor.

In staging this silly egg war, Swift satirized holy wars – such as those that raged between Protestants and Catholics during the 16th and 17th centuries – and more particularly their root causes. At least one commentator has opined that egg breaking may be a nod to the relatively slight variations between Protestant and Catholic communion rites during that period. In any event, clearly Swift was saying that arguing over such trivial matters is absurd, and everyone should be free to choose.

Notably, however, when it comes to memory order, some argue that to avoid anarchy, even though it’s trivial, the community should get together and choose once and for all to either go big-endian or little, but not both.

Were this to be proposed for date formats, clearly the rest of the world would quickly vote to eliminate our middle-endian method. But being Americans, like Swift’s big-endians, I imagine that “rather than submit to break [our] eggs at the smaller end,” we’d flee to Blefuscu where as “true believers [we’d] break [our] eggs at the convenient end.”