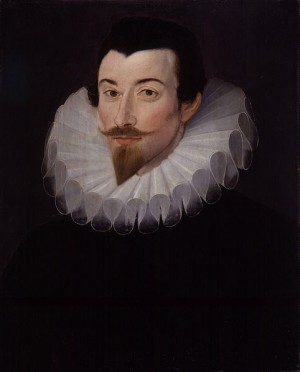 Today I found out why the toilet is sometimes called a “John”.

Sir John Harrington lived in the late 16th and early 17th centuries.  Harrington was one of the 102 god-children of Queen Elizabeth I, known as the “Saucy Godson”, for his proclivity to write somewhat risqué poetry and other writings, which often got him banished only to be allowed to return again sometime later.

Along with writing several notable works, Harrington also devised Britain’s first flushing toilet, which he called the “Ajax”.  This derived from the term “Jakes”, which was a slang term for what we now call a toilet.

Shortly thereafter, Harrington wrote one of his more famous and popular works titled “A New Discourse upon a Stale Subject: The Metamorphosis of Ajax”.  This, on the surface, was about his new invention, but more to the point was a political allegory on the “stercus” (excrement) that was poisoning the state.  The book itself got him banished from the court for a time due to its allusions to the Earl of Leicester.  However, the actual flushing toilet device itself was real and was installed in his home and later one was made for the queen around 1596.  The device worked by pulling a cord that would allow water to rush in from the “water closet”, which would flush away the waste.