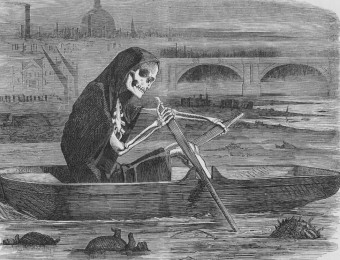 According to the only book I currently have on my desk, everyone poops and that’s okay. What’s less okay though is when there’s nowhere for that poop to go- something people in Victorian era London found out first hand when all of the sewage they’d pumped into the Thames dried up and caused a stench that spurred London’s City Press to note- “Gentility of speech is at an end—it stinks, and whoso once inhales the stink can never forget it and can count himself lucky if he lives to remember it.”

To begin with, let’s talk a little about the Thames, or more specifically, all of the stuff Victorian Londoners dumped into it. While the tons of raw, unfiltered sewage was probably the most noticeable thing being pumped into the river, the Thames was also where waste water from breweries and paper mills, refuse from slaughterhouses, and tons of ordinary household waste ended up being unceremoniously dumped.

If you’re wondering why Londoners had been so short-sighted as to think dumping tons of excrement and refuse into a river that also provided much of their drinking water was a good idea, it was generally thought that since the Thames flowed out into the sea, all of the things dumped into it would similarly be swept out to sea where it would become Poseidon’s problem. Out of sight, out of mind.

However, this didn’t exactly work out as planned. You see, the Thames is a tidal river, meaning the tides invariably ended up pushing the rotted sewage back up river where it collected and started to turn stagnant.

It was also believed that the water from the Thames, even when sewage was being dumped into it, wasn’t dangerous, but we’ll get to that in a moment.

Of course the blame couldn’t be placed squarely on the shoulders of Victorian Londoners because it’s noted that pretty much as far back as anyone can remember, the Thames has been used as a place to store human waste. That said, it’s also noted that as early as the 17th century people were aware that the pollution affecting the river was pretty bad and they still continued to do approximately nothing about it for about two centuries straight.

The pollution became a public concern in the early 19th century when thousands of London citizens began connecting their overflowing, ill-constructed cesspits to London’s many surface water drains; basically creating a system in which tons of raw sewage was not only being washed through the streets, but directly into the city’s main source of “clean” water. For those not dumping their waste into the streets, another method to avoid cesspits filling up too quickly was to simply collect bodily expulsions and carry them off to be dumped into the river. This, coupled with the industrial revolution, saw a river that was already known for being a bit dirty become one of the most polluted on Earth. 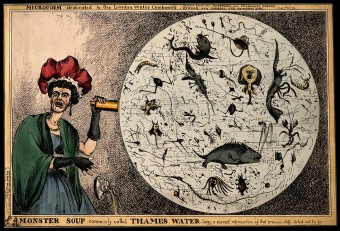 This wasn’t without consequence with several well-known outbreaks of cholera in 1832, 1849 and 1854. In regards to the 1849 outbreak, at its peak, it’s recorded that over 2000 Londoners were dying from the disease per week. The leading theory amongst the majority of the population at the time was that the illness was caused by “bad air” or “miasma”; while this belief certainly made some people avoid going near the stinky river, it didn’t stop them from drinking the putrid water or from contaminated wells.

Enter “the father of epidemiology”, Dr. John Snow, who came to the surprising conclusion that drinking water laced with human excrement was probably causing people to get sick rather than an invisible cloud of filth. To begin with, Snow reasoned that since cholera seemed to affect people’s bowels instead of their lungs, cholera was probably caused by something they’d eaten or drank.

After coming to this realisation, Snow quickly put two and two together and penned a pamphlet called, “On the Mode of Communication of Cholera” in 1849, in which he explicitly linked the transmission of cholera to imbibing of polluted Thames water.

Until, that is, Snow found an unlikely ally in a reverend called Henry Whitehead who worked with Snow to map out where in his parish people had contracted cholera in 1854. This allowed them to zero in on a single water pump causing the problem on Broad Street (today, Broadwick Street), thus confirming that cholera was somehow linked to tainted water. It turns out, the well had accidentally been dug mere feet from a cesspit.

With his research in hand, Snow managed to convince the local council to disable the well pump. The outbreak stopped almost overnight.

Despite this, Snow’s theories were still largely panned and ignored- people didn’t want to believe they had been causing the problem and had been inadvertently consuming their own filth. Though Snow’s work was important to the eventual clean-up of the Thames and the realisation that tainted water is kind of dangerous, he died in July of 1858 and never lived to see himself proven right.

Snow’s death coincided almost exactly with the start of the event that would eventually see his theories taken more seriously- The Great Stink.

You see, the summer of 1858 in London was unnaturally warm- so much so that the Thames water level dropped significantly, exposing decades of rotted sewage to the baking Sun.

The resulting smell was so bad that it was reported at the time to cause people miles away to throw up when the wind changed. Even the upper echelons of London society were unable to escape, up to and including the merry ol’ Queen of England, who famously had to endure a very brief cruise along the Thames with a bouquet of flowers shoved in her face, before ordering the boat be re-docked within minutes of it setting out, so she could get away from the stench.

Papers across the country covered the story with glee, dubbing it “The Great Stink”.

The most deserving people forced to endure the noxious fumes of decades of scorched fecal matter, however, were undoubtedly members of Parliament, who for many years repeatedly ignored pleas from their subjects to do something- anything- about the pollution in the river. 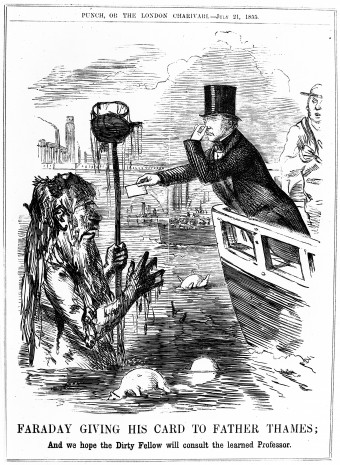 For instance, Charles Dickens had stated in his Little Dorrit novel, that the Thames was “a deadly sewer … in the place of a fine, fresh river.” He later stated in a letter to a friend about the Great Stink, “I can certify that the offensive smells, even in that short whiff, have been of a most head-and-stomach-distending nature.”

Legendary English scientist Michael Faraday openly criticised the government for letting the Thames become so filthy in his open letter entitled “Observations on the Filth of the Thames” published in 1855 in The Times newspaper.

In it he noted, “Near the bridges the feculence rolled up in clouds so dense that they were visible at the surface, even in water of this kind. … The smell was very bad, and common to the whole of the water; it was the same as that which now comes up from the gully-holes in the streets; the whole river was for the time a real sewer.”

He went on to (apparently) look into his crystal ball and note that,

“if we neglect this subject, we cannot expect to do so with impunity; nor ought we to be surprised if, ere many years are over, a hot season give us sad proof of the folly of our carelessness.”

Faraday’s prescient observation wasn’t lost on critics who after the Great Stink noted:

“In 1855, the condition of the Thames appalled the eminent scientist but three years later, in 1858, the hottest summer on record reduced it to a state in which it offended a more influential body: the politicians whose recently rebuilt houses of Parliament stood upon its banks. This proximity to the source of the stench concentrated their attention on its causes in a way that many years of argument and campaigning had failed to do…’”

Indeed, the recently constructed Parliament building MPs held meetings in just so happened to border the foul smelling river. The underlying problem could no longer be ignored by the government.

Initially, beyond the predictable “not my jurisdiction,” responses from individual politicians in response to letters from the citizens of London, MPs tried coating the curtains to the rooms they held meetings in in chloride of lime to quell the stench.

When that didn’t work, they tried to move the seat of government to nearby Oxford- out of sight, out of mind once again. This attempt was ultimately shot down as they’d just spent a fortune building a brand new building that they had to use.

True to a form that would make politicians from any era proud, it wasn’t until thousands of pounds (in 19th century money) had been spent fruitlessly trying to mask the smell by spreading yet more chloride of lime over the exposed sewage that a bill was proposed to fix the underlying problem.

As proof of how fast government can work when it’s about an issue that actually has some impact on the life of those in power, after years of ignoring complaints about the Thames, a sweeping bill authorising £3 million to “refurbish the entirety of the River Thames, was created, passed, and signed into law” in a matter of a few weeks once the stench began bothering Parliament. 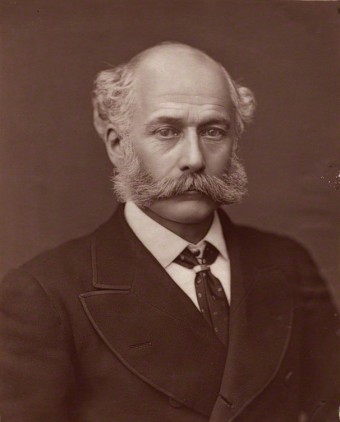 The man put in charge of the refurbishment was Joseph Bazalgette, who two years before had drawn up a detailed plan for fixing the problem of sewage in the Thames. The famed civil engineer’s design not only included a system of sewers and means of supplying fresh water to the city, but also proposed a series of embankments along the river to help it flow more smoothly in order to prevent future build-ups of waste.

The effect of Bazalgette’s sewerage system was felt almost immediately, with the death toll across London dropping rapidly. In the 20 years it took to finish construction, London suffered only one more cholera outbreak that was limited to a small area of the city in 1866 that had yet to be connected to the new system.

Bazalgette’s system was so remarkably well-designed that it is still in use today, thanks in part to Bazalgette’s tremendous forward planning. For example, after working out exactly how wide London’s sewers would need to be to support its population, Bazalgette went right ahead and made them twice as big, knowing that as London grew, it would need the additional space. It’s noted that if Bazalgette hadn’t done this, “London’s drainage system would have been overwhelmed by the 1950s”.

For his service to the country and for constructing a sewerage system that saved countless lives, and more importantly stopped all of London smelling like, well, crap, Bazalgette was knighted in 1875.