Why Fire Hydrants Don’t Freeze and Burst During Winter 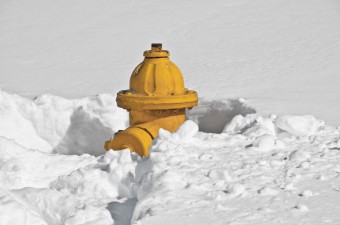 The fire hydrant that we know today traces its origins back to fire plugs. Water mains that transported fresh water in a city or town used to be made of hollowed out logs buried beneath the streets. Whenever there was a fire and firefighters needed water, they dug up the cobblestone street and drilled a hole into the wooden pipe. After they extinguished the fire, the firefighters put a plug in the hole—called a “fire plug”—before reburying the water main. The plug could then be removed and the same hole used if another fire occurred in the area, saving the drilling time.

One problem with fire plugs, however, was that digging for them and moving cobblestones took up valuable firefighting time that should have been spent putting out a fire. In addition, the plugs and holes in the water main were only located in areas where fires had already occurred. So firefighters needed to drill new holes into the water main if they arrived at a fire in a neighborhood that hadn’t yet experience a fire.

The introduction of cast-iron water mains that were much more difficult to drill on the fly resulted in a solution to the problem. As the cast-iron water mains slowly replaced the hollowed out logs and the fire plugs, taps were extended from the water main to above the street level and worked like faucets for firefighters to hook up their hoses. These taps were also placed at regular intervals along the street. Firefighters now had easy access to a reliable source of water and in predictable locations.

In 1801, Frederick Graff, Sr. is generally credited with inventing the fire hydrant that resembles the fire hydrants we know today. Known as the “post” or “pillar” design, these hydrants gave firefighters access to the water through a hose/faucet outlet. They also had a valve on the top of the hydrant. The design allowed water to flow into the hydrant at all times, a type of hydrant that would later be known as a “wet-barrel” hydrant because it always had water flowing into it.

Wet barrel fire hydrants like Graff’s still exist today, though their design means that they are only used in warmer climates. Areas subject to the ground freezing in winter use dry-barrel hydrants.

While the design of dry-barrel fire hydrants make them unlikely to freeze during winter, they can still fail. Either the main valve or the drain valve might stop working if they are not maintained properly or need to be replaced due to old age. Other times, a dry-barrel hydrant may freeze because an unusually cold winter could move the frost line deeper in the ground and cause problems with the water main, potentially damaging the valves in the process. This is why during the winter, you will often see crews out testing the hydrants to make sure there aren’t any freezing problems. After using a dry-barrel hydrant, firefighters will also often notify the appropriate utility company to let them know, so that if they so choose they can come out and make sure the hydrant drained properly. According to the Director of Distribution at the South Bend, Indiana Water Department, how they the check is as follows:

We have a six-foot long weighted string that they drop into the barrel. If it drops down to the bottom with no water on it then we know its fine and the fire hydrant has drained, but if we drop it down and it stops right there then the fire hydrant froze…