December 31, 2013 Emily Upton
Kara asks: A penguin’s feet are always on ice, so why don’t they freeze or have some sort of evolutionary built in insulation? 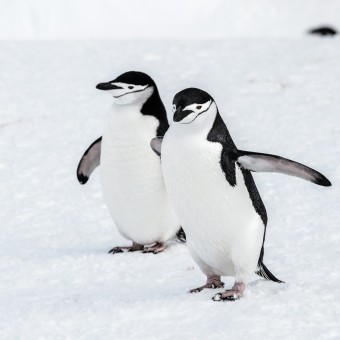 There are many different species of penguin, and while our minds might take us to those living in the Antarctic tundras, freezing feet isn’t something every penguin has to contend with. In fact, there are some species of penguin living on the equator that need their feet to be cool to help them battle the heat.

For the poor penguins who do live in lands of snow and ice, freezing isn’t usually an issue. Most of their body is covered in plumage that is waterproof, which keeps them warm even in the chill of an arctic breeze. Emperor penguins, probably the most recognizable species, have one of the highest feather densities of all birds, with about 100 feathers per square inch. Underneath that cozy plumage is a layer of blubber that acts as an additional blanket. With these two layers, penguins typically can stay toasty warm.

However, heat does escape from two main areas: the beak and the feet, but this can actually be a good thing. By having areas that heat can readily escape from, penguins are able to regulate their temperature, keeping them from overheating at times.  In addition to acting as temperature control, penguin feet are bare for other reasons as well. Penguins need them to grip the ice and help to steer when they are swimming in icy water.

To answer your question less generically, penguins have a highly developed circulatory system that is able to control how warm their feet actually get. There are arteries in the penguins’ legs that are able to adjust blood flow to the feet based on temperature. The arteries restrict blood flow when it’s colder, meaning less blood has to travel through the cold feet, helping to keep the penguin warm. (Humans actually can do this to some extent as well.)  When the penguin is too warm, the opposite happens and the arteries allow more blood flow to the feet, cooling them off.

Besides this built in mechanism, a more mundane way the penguin can control their feet’s temperature is simply to huddle down around their feet so that their body is keeping them more protected and warm. They also sometimes rock back and sit on their tails for a while to get their feet off the ice.

Typically with this heat regulation, the penguins’ feet are kept a few degrees above freezing, and not usually much warmer than that so that the penguins don’t expend too much energy in heating their feet, unless they are already too hot, in which case the loss of heat is a good thing.

Energy is of particular concern to Emperor penguin dads who incubate their eggs for 64 days away from the coast and don’t eat anything during this time—so, preserving calories by not losing much heat is a must! The good news is, with their circulatory system, their feet won’t be turning into ice blocks unless their stored food situation gets critical.