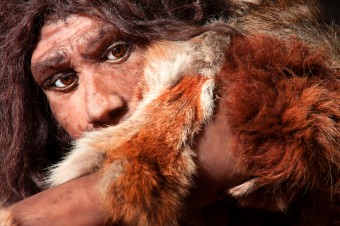 For over 150,000 years, our ancient cousins, the Neanderthals (Homo neanderthalensis), thrived throughout Europe until, in the blink of an eye (geologically speaking), they disappeared off the face of the Earth. Several theories have been proposed to explain their extinction, although a consensus is growing that the primary factor was competition with us (Homo sapiens). Despite their annihilation, however, their legacy lives on today – in the human genome.

Living in Europe and Asia from about 200,000 to 40,000 years ago, the Neanderthal shared many characteristics with modern humans, and in fact, genetically differed only by about 0.12%. Muscular, short and strong, with sloping foreheads and prominent brows, although their appearance would have seemed brutish, scientists note that their brains were about the same size as their Cro-Magnon (early modern human) neighbors.

Recent DNA research has revealed that most Neanderthal died out in Western Europe about 50,000 years ago, and only a remnant of the species lasted through the next 10 millennia – when humans first migrated to Europe.

The scientists who discovered the first massive dying out theorize that climate change, such as one of the many periods of “sudden intense cold and dry phases” known as Heinrich events, may have been the culprit.

Whatever the source, only a handful of survivors remained in the warmer southern areas of Europe, and these remnants are believed to have interbred, resulting in limited genetic variation – a condition that “can make a species less resilient to changes in its environment, and place it at increased risk of extinction.”

Although in years past scientists believed Homo sapiens did not arrive in Europe until about 35,000 BP (before present), recent improvements in archaeological dating methods, and a second look at some very old teeth, have shown that modern humans likely first entered Europe about 45,000 years ago. This period coincides with the loss of diversity (and greater weakness) in the Neanderthal population, and predates its extinction by only 5,000 years.

Coincidence? Most think not, and the consensus is that sapiens simply out-competed neanderthalensis. In support of this theory, some note that although the two had similar brain sizes, the Neanderthal brain was more consumed with managing its significantly larger body and visual processing than with “high-level processing.” As a result, they theorize that the Neanderthal simply did not have the complex language or ability to manage extended social networks that Cro-Magnon had.

The ability to maintain strong social relationships across large distances is believed to have been a distinct advantage when dealing with environmental changes – such as climate change or a major volcanic eruption. Evidence collected throughout Europe demonstrates that while Neanderthal may have maintained relationships with kin up to 30 miles distant, Cro-Magnon were travelling several times that – up to 200 miles.

On this same vein, other researchers note that during this time, Cro-Magnon children enjoyed a longer period of development when compared with Neanderthal children – giving them greater time to learn from elders, and ultimately leading to longer lives. Both factors are believed to also have played a part in Homo sapiens greater ability to adapt to environmental disruptions.

About the time of the Neanderthal extinction, two massive volcanic eruptions covered the continent with ash, killing most plant life and blotting out the sun with thick clouds. The first occurred in the Caucuses about 45,000 years ago, while the second, known as the Campanian Ignimbrite, erupted in southern Italy at around 40,000 BP.

Since in the past many thought modern humans had not migrated to Europe until 5,000 years after the eruptions, a popular theory held that the volcanic winter killed-off the Neanderthal – while early modern humans were safely living to the south in Africa.

However, with the recent changes to the date of first arrival, so that it now coincides with the volcanic eruptions, researchers have had to take a second look. Examining minute particles of volcanic ash from sites a bit more distant from the Italian eruption, they discovered that the ash was on top of archaeological evidence that showed “the transition from Neanderthal to modern human stone tool types.” Since this evidence demonstrates that the Neanderthal were displaced by Cro-Magnon in those sites before the volcano erupted, the researchers concluded that another factor was to blame.

The same researchers who examined the volcanic ash also analyzed tree pollen and other indicators of climate change (like marsh and sea sediments) and determined that during this period, the Heinrich event (period of sudden cold and dry conditions) had yet to occur. They deduced, therefore, that climate was also not responsible, at least directly, for the extinction of Neanderthal. Ultimately they concluded that competition with cleverer Homo sapiens was likely to blame.

Gone But Not Forgotten

Although competition with early modern humans may have been the final cause for Neanderthal extinction, there is little to no evidence of animosity between the groups – and in fact, it appears the opposite may be true.

Recent genetic research has shown that “about 2% of the genomes of people who descend from Europeans, Asians and other non-Africans is Neanderthal,” meaning that the two different species interbred at some point.

Nonetheless, because of the distance between them genetically, scientists note they were not very compatible biologically speaking, so that the offspring between a Neanderthal and a Cro-Magnon was often infertile. In addition, many of the Neanderthal genes in those hybrids that continued to mate with humans were eventually selected out.

Interestingly, although Neanderthal DNA makes up only a small amount of our genome, since different humans today carry different Neanderthal genes, when combined together, modern humanity contains a record of about 20% of the Neanderthal genome.

Notably, nearly all Neanderthal DNA found in humans today comes down through the female line because the male hybrids were “significantly less fertile, and possibly even sterile.”