July 12, 2014 Daven Hiskey
This is a weekly wrap of our Daily Knowledge Newsletter. You can get that newsletter for free here. 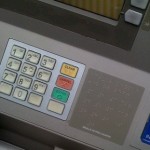 Mainly, it is because it is required by law, thanks to the ADA Accessibility Guidelines for Buildings and Facilities.  There are certain exceptions, in terms of these requirements, when it comes to drive-up ATMs vs. walk up ATMs, such as the differing requirements on the “Reach Ranges” in section 4.34.3.  However, being able to get rid of the Braille is not one of these exceptions, despite initial protests from the American Banker’s Association who argued that any visually impaired person could simply get the driver to help.  The committee in charge of coming up with these standards rejected this argument because it would no longer allow a visually impaired person to use the ATM independently. Blind people actually do use the drive up ATMs all the time too, contrary to what many people think.  It’s not uncommon… (more) 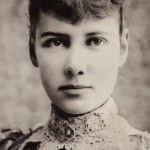 Born Elizabeth Jane Cochran in 1864, Nellie Bly was considered the most rebellious of her father’s fifteen children. (Yes, fifteen) Her family was thrown into poverty when her father died when she was just six years old; in a time when women weren’t expected to hold down a job, it was difficult for her mother to find work enough to support the family. By the time Elizabeth was fifteen, she decided to go to school to become a teacher. Unfortunately, she didn’t have enough money to continue studying past the first semester, and she returned home to her mother in Pittsburgh. There weren’t a lot of options there, either—she helped to run a… (more) 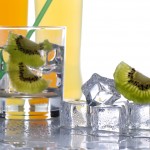 Why are Some Ice Cubes Clear and Others Cloudy?

Unless you happen to have a specialized ice machine in your home, it is practically guaranteed that the ice your freezer makes is of the cloudy variety. A popular and well known trick to making clear(er) ice is to either boil the water first or use distilled water. However, even doing this won’t guarantee the kind of perfectly clear ice you’d find in a high-end bar or restaurant. This is because how clear ice is, is only partially dependent on the purity of the water you use, meaning even  if you managed to procure the tears of a Saint and pass them through the world’s best water filter, you’d still likely end up with ice that was a little cloudy. So what’s going on here? For those of you have the time, go to any nearby sink… (more) 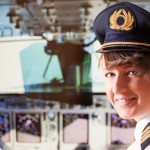 When it comes to gender disparity, the world of commercial airline piloting is one of the most skewed with a whopping 97% of all commercial pilots being male (4000 female commercial pilots vs. 130,000 male worldwide according to The International  Society of Women Airline Pilots).  Those numbers shift slightly when you factor in women who are qualified to fly private planes but not commercial. But there is still a huge difference in the number of males compared to females even in this case. According to the US Civil Airmen Statistics, in 2011 there were about 617,000 qualified pilots in the United States, 41,000 of which were women, which means just over 93% of all pilots in 2011 were men. So what gives here?  Do women just not like flying? Are the airline industry and the training schools just sexist? On the latter issue, at one point like in so many industries, yes. As discussed in this article on Helen Richey, who became the world’s first female pilot “to fly a commercial airliner on a regularly scheduled mail route” on December 31, 1934, she quit after only 10 months… (more) 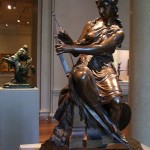 They are mentioned time and again by the ancient Greeks in both their history and mythology, going all the way back to Homer in approximately the 8th century B.C.  They were described as formidable warriors who cut off one breast to be better archers (one wonders if being lopsided would affect their aim ;-)). They lived in women-only communities, taking lovers once a year solely for the purpose of procreation. These ferocious, independent, goddess-worshipping women were called the Amazons. Some of the most memorable Amazons from antiquity include Antiope, who the hero Theseus won during a raid and made his concubine (you can imagine how well that went over); Pentheselia, who met Achilles in battle during the Trojan War; and Myrina, Queen of the African Amazons. Their name has since been used through the ages to describe warrior…(more) 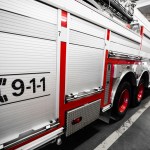 How Did “911″ Become The Emergency Call Number in North America?

Before the 1960s, the United States didn’t have one universal phone number for Americans to call if they needed help from the police or fire department. Callers simply had to know the phone number for each department in the area they were currently in. In the case of large cities, there were often multiple police and fire departments covering different areas. Los Angeles, for example, had fifty different police departments and just as many phone numbers. Telephone operators would usually be left to direct emergency calls if the caller wasn’t sure which department or phone number they needed. Oftentimes there would be further delays upon getting the police or fire department on the line if the clerks who answered the phone were busy with another caller. Needless to say, this system wasn’t optimized to get emergency help where it needed to go very quickly… (more) 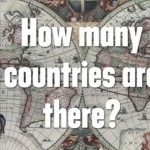 How Many Countries are There in the World

This is a video from CGP Grey. If you’re a fan of TodayIFoundOut, I guarantee you’re going to love his YouTube channel, unless you just hate videos that is. (He also has a good podcast, Hello Internet, with fellow famous YouTuber Brady Haran.) Also, don’t forget to check out TodayIFoundOut’s YouTube channel here, which very soon will start being updated weekly as our video person switches to doing this full time instead of almost never-time. 😉 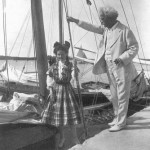 On February 12, 1908, Clemens said, “I suppose we are all collectors… As for me, I collect pets: young girls — girls from ten to sixteen years old; girls who are pretty and sweet and naive and innocent — dear young creatures to whom life is a perfect joy and to whom it has brought no wounds, no bitterness, and few tears.” Okay, so it isn’t actually as creepy as it initially sounds and in many ways is kind of sweet.  Towards the end of Clemens’ life, he suffered quite a lot of hardship. His daughter, Susy, died in 1896 and his wife, Olivia, passed away in 1904, followed by a second daughter, Jean, in 1909. Clemens fell into a depression in the early 1900s and noted that while he had reached the grandfather stage of life, he had no grandchildren to keep him company. He therefore went about befriending young girls who he treated as surrogate granddaughters. The girls in question were the daughters of couples… (more) 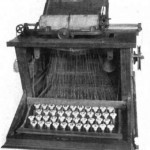 The first typewriter was introduced to the United States in 1868 by Christopher Latham Sholes. His first attempt to build a typing device consisted of a crude and sluggish machine that was far from perfect. The design used letters and characters on the ends of rods which were called typebars. When a key was struck, the typebar would swing up and hit the ink-coated tape which would transfer the image onto paper. The original design of the keyboard positioned keys in alphabetical order in two rows. Makes sense, right? Well, this arrangement caused the typebars of the most commonly used combination letters of the alphabet (ie. TH and ST) to be positioned close together, so when the keys were hit right after the other with a speed faster than a snail, the keys would jam. The attempt to solve this malfunction resulted in a rearrangement of keys. In 1868, in collaboration with educator Amos Densmore… (more)

As with so many things in history, we can’t know with 100% accuracy why men’s and women’s clothes button up the opposite way. (Even something relatively recent like who invented Buffalo Wings is up for debate despite being invented only about a half century ago.) But there are several theories floating around on the button front, one of which is particularly plausible. The most widely touted theory by far is that the practise of reversing buttons on men’s and women’s clothing stems back to the time of elaborate dress of gentlemen and ladies when upper-class women, particularly during the Victorian era, wore so many layers that it was necessary for them to be dressed by a servant or maid. As such, it became customary to make clothes for women that were slightly easier for other people to button up, specifically right handed people. Men’s clothes were left with the button… (more)