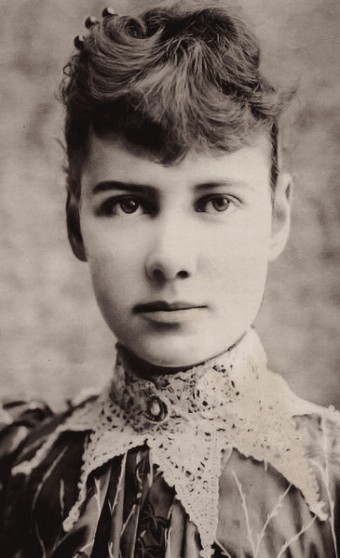 Today I found out about Nellie Bly, the woman who purposefully got herself committed to a notorious insane asylum so that she could report on what actually went on inside.

Born Elizabeth Jane Cochran in 1864, Nellie Bly was considered the most rebellious of her father’s fifteen children. (Yes, fifteen) Her family was thrown into poverty when her father died when she was just six years old; in a time when women weren’t expected to hold down a job, it was difficult for her mother to find work enough to support the family.

By the time Elizabeth was fifteen, she decided to go to school to become a teacher. Unfortunately, she didn’t have enough money to continue studying past the first semester, and she returned home to her mother in Pittsburgh. There weren’t a lot of options there, either—she helped to run a boarding house, but full-time work was difficult to come by.

Not long after, Elizabeth read a series of articles by “Q.O.” or “Quiet Observer”—the pen name of one Erasmus Wilson, one of Pittsburgh’s most well-known journalists. The man had quietly observed that women belonged in the home, no doubt barefoot, pregnant, and making their husbands’ dinners while simultaneously rubbing their feet and bringing them a beer… 😉

Q.O. called working women “a monstrosity.” Elizabeth was angered by the statements, as she knew that she and many other girls had to work to maintain some quality of life for themselves and their families.

Perhaps exhibiting that “rebellious” streak that her parents had discovered in her as a child, Elizabeth wrote a strongly-worded letter to the newspaper about the offensive articles. They liked the spirited nature and quality of writing exhibited in her letter so much that they hired her on as a writer, giving her the pen name “Nellie Bly.”

Her first article talked about the difficulties faced by poor working women, but the newspaper insisted on her covering stories for the women’s pages. Nellie wasn’t interested in writing about fashion, and she soon quit and headed for New York, where she got her big break.

On September 22, 1887, Nellie Bly was approached by the New York World to write an article about the inner workings of the notorious Blackwell Island Insane Asylum.

They wanted to know what went on behind the barred doors and the smiles of white-clad nurses, and Nellie was determined to find out. The editor offered her no solid plan to get her out of the institution once her observations were completed, but promised her it would be achieved somehow. Her instructions were simple: “Write up things as you find them, good or bad; give praise and blame as you think best, and the truth all the time.”

But first, Nellie had to get herself committed, which meant she had to feign insanity convincingly. She decided to pose as a poor girl looking for work at the “Temporary Home for Females” under the name Nellie Brown. There, she started displaying “insane” behaviour in an attempt to get herself committed. She said she was afraid of the other women, spoke vaguely, and spent that first night staring blankly at a wall rather than sleeping. She reported that another woman staying at the home had a nightmare that a crazed Nellie rushed at her with a knife—her plan was working.

The assistant matron of the house ended up calling for police officers to take Nellie away in the morning. Nellie was brought before Judge Duffy, who ruled that she had undoubtedly been drugged and had a doctor come in to examine her. She was declared insane.

She was examined by a second medical expert, who said of her

Positively demented. I consider it a hopeless case. She needs to be put where someone will take care of her.

The first of Nellie’s observations about insane asylums was that it wasn’t very hard to get into one. The doctors were incompetent in determining who was actually insane and who wasn’t; Nellie met several other patients who didn’t seem to have anything wrong with them, either. She and her new comrades weren’t necessarily ill-treated those next few days while they waited to be taken over to Blackwell Island, though the food was sub-par and the sleeping arrangements were chilly and uncomfortable.

As her incarceration drew a bit of publicity, one of Nellie’s biggest worries was that a reporter would come around to find out more about her, because “if there was anyone who can ferret out a mystery it is a reporter,” and she didn’t want to be recognized.

Nevertheless, she managed to make it to the island undiscovered, and once on the island, Nellie watched as the patients were brought before the doctors. One woman had simply been sick with fever leading up to her commitment to the mental institution, and was no more insane than Nellie was. Another woman was German and, since the doctors couldn’t understand her, wasn’t given a chance to tell her story. When it was Nellie’s turn, she was asked several questions largely unrelated to the question of her sanity. The doctor was far more concerned with the nurse, with whom he flirted.

Bly decided to drop her feigned insanity and act as she did in her everyday life as soon as she got to the island. The nurses barely took notice, adding another concerning element to Bly’s stay in the institution. She noted that, “the more sanely I talked and acted, the crazier I was thought to be.”

Asylum life, Nellie soon found, was unsuitable even for the truly insane. She was forced to endure ice-cold baths, freezing nights, both verbal and physical abuse at the hands of the nurses, isolation, and fear of fire (the doors were individually locked- so no easy way to unlock them all at once- and the windows were barred; if a fire broke out, it was likely a majority of the patients would die).

Bly was only at the asylum for ten, cruel days, but she noted that,

What, excepting torture, would produce insanity quicker than this treatment? . . . Take a perfectly sane and healthy woman, shut her up and make her sit from 6 a.m. to 8 p.m. on straight-back benches, do not allow her to talk or move during these hours, give her no reading and let her know nothing of the world or its doings, give her bad food and harsh treatment, and see how long it will take to make her insane. Two months would make her a mental and physical wreck.

At one point, Bly was visited by a reporter who she knew quite well. He was shocked to find Nellie Bly where he thought to write an article on the insane Nellie Brown. Bly begged him not to blow her cover, and he didn’t—saying only that she wasn’t the woman he had been sent to see. He ended up leaving shortly after.

Towards the end of her stay, Bly pressed the doctors for answers. How could they determine whether or not a woman was insane if they didn’t listen to them? She insisted on a full examination to determine her sanity, but the doctors only brushed her aside, thinking she was raving. Bly wrote that “The insane asylum on Blackwell’s Island is a human rat-trap. It is easy to get in, but once there it is impossible to get out.”

Luckily for Bly, her editor made good on his promise to get her out of the place. After ten days in the asylum, she was on her way back to New York. The first installment of her report on the conditions in the asylum was published a few days later. Readers were horrified, and Bly was made a celebrity of sorts, praised for her bravery during her time in the asylum.

The doctors and nurses were full of excuses, but they weren’t heeded. Bly’s story forced many changes to be made. In addition, just under $1 million more was appropriated to the Department of Public Charities and Corrections (about $25 million today) as a result of her story, allowing for better, and safer, conditions and better treatment of the patients.

One of the women Bly had befriended during her stay said,

Ever since Miss Brown has been taken away everything is different. The nurses are very kind and we are given plenty to wear. The doctors come to see us often and the food is greatly improved.”

Masquerading in an insane asylum wasn’t the last of Bly’s adventures. She went on to have a great many more, including traveling around the world in 72 days almost completely unchaperoned- which was a much bigger deal back then for a woman particularly. This was done as part of a race with another reporter who was traveling in the opposite direction, to see who could beat the other and if it were possible to beat the “80 days” from Jules Verne’s novel.  During her trip, she even met Verne in France.

Bly would later marry an extremely successful businessman and herself become the president of the Iron Clad Manufacturing Co., making her one of the most prominent women in business in the U.S. for a time, besides being one of the more well known female reporters.  Not bad for a little girl born one of fifteen to a poor family in a time where women were actively discouraged from venturing outside the home for work.

If you’re interested in reading more of Bly’s adventures traveling around the world in 72 days or at the insane asylum, you can read the complete tales, which are amazingly fascinating, in her own words here: