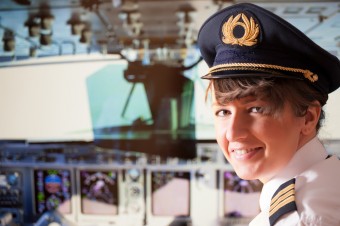 When it comes to gender disparity, the world of commercial airline piloting is one of the most skewed with a whopping 97% of all commercial pilots being male (4000 female commercial pilots vs. 130,000 male worldwide according to The International  Society of Women Airline Pilots).  Those numbers shift slightly when you factor in women who are qualified to fly private planes but not commercial. But there is still a huge difference in the number of males compared to females even in this case. According to the US Civil Airmen Statistics, in 2011 there were about 617,000 qualified pilots in the United States, 41,000 of which were women, which means just over 93% of all pilots in 2011 were men.

So what gives here?  Do women just not like flying? Are the airline industry and the training schools just sexist?

On the latter issue, at one point like in so many industries, yes. As discussed in this article on Helen Richey, who became the world’s first female pilot “to fly a commercial airliner on a regularly scheduled mail route” on December 31, 1934, she quit after only 10 months due to how poorly she was treated by male staff.

Among other things, Richey was barred from becoming a member of the Pilot’s Union and was forbidden from flying in anything other than fair weather. It should be noted here that these restrictions were being placed on a woman who once crawled onto the wing of a plane she was flying to repair a tear.  She also spent years flying stunt planes.

Another thing that historically was holding early female pilots back was the fact that to become a commercial pilot, one needed to be subjected to various strength and height requirements. Since women are generally shorter than men and there is often a disparity in physical strength, many women were barred from even applying to become a pilot. However, in recent years this has gotten much better, to quote The International  Society of Women Airline Pilots: “These requirements have mainly fallen by the wayside. The only requirement is that a prospective pilot can fly the simulator provided during the interview process, without undue problems due to height or strength.”

As for the issue of sexism in more modern times, according to pilot and editor of Aviation for Women magazine, Amy Laboda, “I can tell you that [female airline pilots] have made tremendous progress, and the reason … is because most of the dinosaurs are gone… The men who didn’t want women in the cockpit have mostly retired.”

Today, it’s generally not so much that those within the industry have any issues with female pilots, but, interestingly enough, the people who respond most poorly are the passengers. Within the industry, there’s actually been a huge drive by some airlines in recent years, for example by British Airways, to increase the number of females applying for given positions, and thus hopefully start to even out the numbers. So with some companies, while you’re still going to need to bring the skills and the experience to the table, you actually might have a leg up on the competition at the moment if you’re a woman trying to become a commercial pilot.  If you’ve got the same skill and experience as a male applying, one would think the companies looking for more female pilots will pick you over your equivalent XY competition.

So why haven’t the numbers evened out since the sexist “dinosaurs” have all retired? Well one theory is that the sheer amount of time one needs to dedicate to being a pilot, and brutal travel schedule, turns a lot of women off because they’d rather focus on their domestic life and stay closer to home. This is a nice theory and perhaps is a factor, but there are only colloquial sources to back it up. Further, the same can be said about a lot of industries that don’t see anywhere near a 4,000 vs. 130,000 type split in number of women vs. men working in the respective fields.

Another theory is that, for whatever reason, young girls never see being a pilot as a career option whether because the field doesn’t fit young girls’ interests or perhaps simply because you rarely see female commercial pilots in real life or on TV or movies; so there is a lack of visible role models. A study conducted by British Airways in their efforts to learn why more women don’t become commercial pilots discovered that among young boys, “pilot” was the second most popular career choice. With girls, it wasn’t even mentioned. So whatever the underlying reason, most young girls just don’t find becoming a commercial pilot appealing. This also, perhaps, explains why the numbers are so skewed even in the private pilot license arena, still with a 93%/7% male vs. female split.

All that said, it’s generally thought that the biggest factor stopping women from becoming commercial pilots is the fact that a lot of pilots come from a military background, an option that wasn’t even open to women in many countries (and some still not) until relatively recently. In the U.S., for instance, until 1993 women weren’t allowed to fly combat aircraft.

So if a woman wanted to become a commercial pilot before such restrictions were lifted, they’d have to foot the $100,000-ish bill to acquire all the necessary training and experience.  And keep in mind, commercial pilots just starting out don’t get paid much.  According to FAPA (Future and Active Pilot Advisers), first officers can start out as low as $20,000 per year. Needless to say, investing those same dollars and hours into other careers can often be much more lucrative, particularly up front. As commercial pilot Jill Schilmoeller said, “You have to love flying, because you start off getting paid horribly and you are gone a lot…”

To get around the training cost, one essentially has to join the military, where once again we find a huge disparity in the desire to do so in men vs. women.  So not only do we have an issue of young girls not dreaming of becoming pilots, but we also have significantly less women joining the military and becoming pilots there, and maybe making “commercial pilot” a future option for themselves, even if they didn’t think of it as an option as a child. While most men also don’t see the military as an option they want to pursue, the small number that do and then become pilots there still eclipse the number of women doing it.

Combined with the cost of getting the training all yourself without the military footing the bill, this results in a relatively huge pool of men applying for commercial pilot positions compared to women. So when it all shakes out, even without any sexism in the industry itself, the result is that, at least for now, it will be a rare flight you take where one of the people flying the plane is a woman.