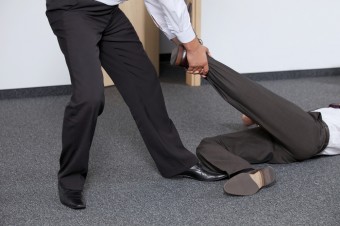 For those who aren’t familiar with the phrase, when someone says, “You must be pulling my leg!” they usually mean, “You must be joking/teasing/making something up.” Extremely popular in the 20th century, the origin of this phrase is still something of an enigma to etymologists.

There are two popular theories about how this phrase came about, neither of which is backed up by any real evidence nor are they that plausible. First, is that thieves used to pull at people’s legs to trip them. Once the victim was on the ground, the thieves would have ample opportunity to rob them. While it is an interesting story, the plausibility is low and the details of the origin change too much to be taken seriously. Some people say that this happened in the vague “medieval markets” or “Victorian London,” while others give an exact date—say, 1882—with confidence. Unfortunately, the lack of any documented evidence of this origin theory makes it nothing more than a fanciful guess.

The second origin theory has to do with executions by suspension hanging at Tyburn in England. It’s believed that people were occasionally hired to hang on to the victim’s legs to give them a quicker death. Suspension hanging typically results in a much slower death than long drop hanging, and the extra weight on the victim’s legs could potentially make the rope mercifully work a little faster. However, this theory is also discounted as, among other reasons, there is no documented evidence of how the phrase made the leap from “hanging” to “joke/lying.” Plus, there is no record of the phrase during the time suspension hangings were popular. As many important figures, among others, experienced death by suspension hanging, one would think the phrase ought to have appeared in at least one of the reports of the deaths.

So when did this phrase first appear? The earliest record of it appeared in the diary of James Gallatin in 1821, but there is a caveat as you’ll soon see:

Mr. Adams is not a man of great force or intelligence, but his own opinion of himself is immense. I really think father, in a covert way, pulls his leg. I know he thinks little of his talents and less of his manners.

This diary was published in 1914 as The Diary of James Gallatin, Secretary to Albert Gallatin, a great peace maker, 1813-1827, but it is thought to be a fake. It was put together by Gallatin’s grandson who is thought to have made up much of what was in it. So we can’t reliably say that “pulls his leg” was really around in 1821, and it probably wasn’t given the many decades between this instance of the phrase and the next documented instance.

As for that, it appeared in The Newark Daily Advocate in Ohio in 1883:

It is now the correct thing to say that a man who has been telling you preposterous lies has been ‘pulling your leg.’

This explanation seems to imply that the phrase was relatively new at the time.

Now, another much less popular definition for the phrase that was also around at this stage of the game was “to ask a person for something, especially money.” From this, perhaps it was the case that it originally had to do with someone trying to trick you into giving them money, often by lying to do it. And perhaps the leg part of the phrase came about based on that when someone was doing this, they were metaphorically pulling at one’s trouser pockets to get said funds in them. Who knows?  I just made that up, which means it has just about as much evidence backing it up as the aforementioned theories.