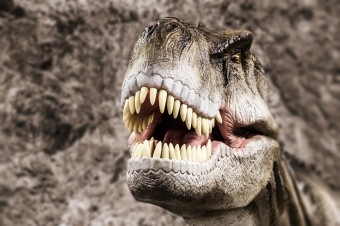 In the immensely popular movie Jurassic Park, there’s the famous scene where the giant T-Rex is attacking a jeep during a thunder storm. As it attacks, Dr. Alan Grant, a self-respecting paleontologist, yells, “Don’t move! He can’t see you, if you don’t move.” Here’s the thing – that’s wrong.  (If that comes as a blow, you’re definitely not going to want to learn the shocking truth about Velociraptors.) The Tyrannous Rex not only could see just fine, whether the object was moving or non-moving (which helps one not run into things), there’s also quite a bit of evidence that the T-Rex’s sight was extremely good, very possibly better than modern-day hawks and eagles.

This non-moving “fact” from the hit 1993 movie inspired a good deal of research into the subject. Professor Kent Stevens at the University of Oregon began the project DinoMorph in 1993. His goal was to develop “a means to create scientifically useful yet simplified digital models of dinosaur skeletons.” Using digital technology, he wanted to recreate tangible visualizations of extinct animals, including the T-Rex. After speaking at a conference in Toronto in June 1993 (the movie was released in the US  on June 11, 1993), he paid a visit to the Royal Ontario Museum where he met with North America’s leading paleoartist, Garfield Minott. He was working on a life-size “reconstruction” of a Tyrannosaurus Rex and provided Stevens with life-like head sculptures of seven different theropods (bipedal and primarily carnivorous dinosaurs), including a T-Rex and Velociraptor.

Using these models, a laser pointer, a glass plate, and taxidermic glass eyeballs, Stevens performed experiments to determine the visual field, depth perception, and binocular range (the area that can be viewed at the same time by both eyes) of these dinosaurs. He published the results in 2006. Performing a test called “inverse perimetry,” Stevens evaluated how well a T-Rex would be able to see objects at various elevations and shapes. The wider an animal’s binocular range is, “the better its depth perception and capacity to distinguish objects–even those that are motionless or camouflaged.”

Another recent discovery also confirmed that vision was an important sense for the T-Rex, as scientists determined that the T-Rex’s snout over time gradually grew longer, narrower, cheek bones dipped more inward, and their eyeballs grew bigger.

While structurally the T-Rex’s head and eyes seem primed for great vision, the question remained- how good were their eyes really? For that, Stevens took the known optics of distant relatives of the T-Rex, including the eagle, chicken, and crocodile, and plugged them into the larger T-Rex eyeball. He was trying to determine visual acuity (clearness of vision) and the greatest distance an object can be seen that still remained distinct. According to his findings, while admitting that these were best-case scenario determinations, the T-Rex may well have had visual clarity up to 13 times better than a modern human. For reference, an eagle has about 3.6 times the visual clarity of a person. Additionally, it was determined that a T-Rex’s vision allowed an object to remain relatively clear up to six kilometers away. For humans, it’s only about 1.6 kilometers for the same clarity. As Stevens put it, “With the size of its eyeballs, (the T-Rex) couldn’t help but have excellent vision.”

Of course, in the movie (and to a greater and more detailed extent in the book), it is stated that in order to bring these dinosaurs back to life, the scientists needed more DNA to fill the “gaps”. In the book, they decided to splice dino DNA with bird, lizard, and frog DNA. In the movie, they only use frog DNA to hammer home the plot device that certain species of frogs can change gender when there is significantly less of one gender in the wild. So given this, it may be that the dinosaurs in the movie are more frog than actual historic dinosaurs. So, if that’s the case, while a bit of a stretch, the question that can be asked is, “Was the statement made by Dr. Grant in the movie actually more about a frog’s vision than a T-Rex’s?” Digging a tad deeper, this quote from the movie by Dr. Grant gives us a clue to what species of frog they may have used:

They mutated the dinosaur genetic code and blended it with that of a frog’s. Now, some West African frogs have been known to spontaneously change sex from male to female in a single sex environment.

The most common West African frog that has a tendency to change gender is the African reed frog. These frogs see quite on par with other species of frogs with their horizontal pupils, though they cannot see in the red spectrum. Yes, it is documented that frogs have a hard time seeing prey that doesn’t move, but not significantly so, such that they’d be blind to them. Plus, humans (and really, all other prey) do move even when they think they are standing still- breathing, trembling, involuntary jerks, this is all movement. Additionally, as Kent Stevens said in response to this moving myth question, “If you’re sweating in fear one inch from the nostrils of the T. Rex, it would figure out you were there anyway.”

Besides great vision, the T-Rex also had a great sense of smell (and had good hearing). In fact, their large olfactory bulbs and nerves relative to their brain size indicates they may have had a sense of smell about equivalent to modern vultures, which are able to smell dead things from as far away as a couple kilometers. (See: Why Don’t Vultures Get Sick When They Eat Dead Things) So whether scavenging or hunting, the T-Rex was good at finding things to eat.  That said, there is some debate as to just how fast they were, with most scientists today thinking they had only a max speed of about 17-25 mph. That would have made the jeep chasing scene quite a bit less dramatic.