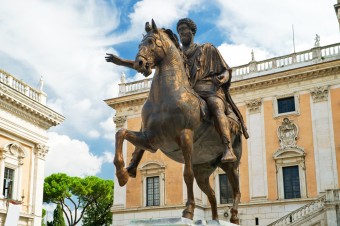 Myth: The way a soldier’s horse is portrayed in an equestrian statue indicates how the soldier died.

This myth, perpetuated by many a tourist guide the world over, simply isn’t true. (Not unlike how tourist guides around the equator will often tell you that what hemisphere you’re in effects the way the water swirls down the toilet or drain.  They’ll even sometimes take you a few hundred meters on one side of the equator and show you water swirling one way, then a few hundred meters from that on the other side of the equator and show it swirling the other. Magic!  In fact, of course, what hemisphere you’re in has almost nothing to do with the way water swirls down toilets and drains.)

An example of a tourist guidebook that perpetuates the equestrian myth is the 1987 Hands on Chicago:

At Sheridan Road and Belmont Avenue, the statue of [General] Sheridan beckons troops to battle. The horse General Sheridan rides is named Winchester… Winchester’s raised leg symbolizes his rider was wounded in battle (the legs of [General] Grant’s horse are on the ground, meaning he was not wounded).

This gives a pretty good account of the myth as it is generally stated, but leaving out the third commonly said option of the horse having both front legs in the air, implying the soldier died in battle. Another caveat is that if the rider died of complications from wounds received in battle, but at a later date from the battle, most versions of this myth have it that just one leg should be up as with the people who were wounded but didn’t die of complications from the wound.

According to the U.S. Army Center of Military History, no such tradition has ever existed. This is not surprising considering that examples of multiple equestrian statues of the same person tend to be inconsistent in terms of the horse’s legs positioning.  But let’s not take the U.S. Army historian’s word for it, let’s look at some examples.

First, take a walk around Washington D.C., which has the largest collection of equestrian statues of any city in the world.  From this, you’ll quickly be disabused of the notion that the depiction of the horse’ legs has anything to do with the way the person died, with only about 30% of this city’s statues conforming to the above “rules”.  (Given that there are 3 options here, that 30%-ish seems rather fitting.)

One of the oldest known equestrian statues in the United States is the 1853 statue of General Andrew Jackson in Lafayette Park, Washington D.C., which was made in celebration of Jackson’s victory over the British at the Battle of New Orleans.  In this statue, the horse has both forelegs in the air.  Of course, Jackson did not die in battle but of tuberculosis.  The person who cast that sculpture, Clark Mills, was the first sculptor in the United States to cast a horse with a rider where the horse has some of its legs in the air (in this case both)- at this point it was more of a mark of the skill of the artist to have the horse with legs in the air rather than any sort of tradition relating to battle and death.

In cases where the same sculptor made multiple equestrian statues that could potentially apply to this “rule”, such as the case of world renowned Irish sculptor Augustus Saint-Gaudens, we see that he at times violated the supposed tradition and other times seemed to adhere to it. One such statue he made of General William Techumsa Sherman has one of the front legs of the horse raised.  Indeed, General Sherman was wounded twice in battle, and even had 3 horses shot out from under him.  He did not die in battle, but lived to the ripe old age of 71, and is thought to have died from pneumonia. So from that respect, this one fits.  It should be noted, though, that this statue also has one of the horse’s rear legs lifted.  The equestrian statue horse legs myth doesn’t seem to cover what that potentially would mean… maybe… just maybe… it means the horse is supposed to look like it’s running and has nothing to do with the rider’s death/wounds…

There is also a major equestrian statue of General Sherman at the General Sherman Memorial in Washington D.C.  This statue has the horse with all four legs on the ground. (This is a common theme where multiple equestrian statues exist.  One would guess the differences have something to do with sculptors wanting theirs to look markedly different than the already existing statue(s).)

The only place where this equestrian statue “tradition” seems to hold with any sort of consistency is with a few statues of soldiers who fought in the Battle of Gettysburg. (This is thought to be how the myth got started in the first place.) Of the nearly 500 monuments at Gettysburg, there are 6 equestrian statues.  Five of the six conform to the myth and the sixth loosely does, but the problem is the statue of General John Sedgwick, who died at the Battle of Spotsylvania Court House- his equestrian statue has all four hooves are on the ground.

(Aside: General Sedgwick’s last words were: “What? Men dodging this way for single bullets? What will you do when they open fire along the whole line? I am ashamed of you. They couldn’t hit an elephant at this distance.”  He then took a bullet through his head fired from about 900-ish meters (1000 yards) away.)

Of course, it could be argued that this “tradition” was meant only to refer to what happened at the battle of Gettysburg, in which Sedgwick was not wounded nor did he die in.  If that’s the case, then his is correct.  However, if that’s the case then the statue of James Longstreet in that collection is not. He wasn’t wounded in Gettysburg, but his statue has the horse with one foot raised. (He was wounded in the Battle of Glendale, so that would fit there, but not if we’re limiting the statue’s positioning based on the battle of Gettysburg to make the statue of General Sedgwick fit.)

Even then, it seems odd such a code would be created just for 6 statues of prominent people who fought in the battle of Gettysburg, and even more odd that if the code did exist that they would have broken it in one of the statues.  Given there is no record of the sculptors having done this intentionally, and the discrepancy, it’s really not clear that this is what they were going for.  It’s possible given the small sample size and that this is the only place we find this somewhat consistent correlation, it just randomly happened to work out that way with the way the sculptors decided to make the statues.

So this covers pretty thoroughly the statues in America.  What about the equestrian statues across the pond?  The Ancient Romans had numerous examples of equestrian statues, but unfortunately nearly all were destroyed or melted down for use in other things.  One of the very few surviving equestrian statues from Rome was of Emperor Marcus Aurelius who died in 180 of an illness.  His horse in that statue has one foreleg up in the air.  There is no record of Marcus Aurelius ever being wounded in battle and as a prominent Roman and eventual Emperor, it’s unlikely he saw much direct, close-up battle time (though was a part of many battles).

(Aside: funny enough, probably the only reason the statue of Marcus Aurelius survived when most all the others did not is that for a long time it was misidentified as a statue of Emperor Constantine the Great, who was a Christian Emperor.  Why is this important to its preservation?  Because many of the Roman statues were melted down to make things like church bells, coins, and sculptures for churches.  Melting down a statue of Constantine would have been borderline blasphemy.)

There is a surviving equestrian statue of Emperor Constantine with the horse having both front legs up.  Constantine did not die in battle, rather of natural causes.

Fast-forward to more recent times, in Medieval Europe and there really aren’t many equestrian statues, as they were (and are) very expensive to make and require a skilled sculptor.  The few examples that exist don’t seem to correlate at all with any sort of horse leg tradition.  For one brief, slightly more recent example, we have King Louis XIV who had an equestrian statue at Versailles with both forelegs on the horse in the air.  Louis XIV died of gangrene at the age of 77, not in battle.

Given that many a sculptor has worked on equestrian statues throughout history, if  there is supposed to be some sort of code, even if not generally followed, there would be documentation of it somewhere- after all, they have to pass that code on.  Not surprisingly, there is not.  It’s almost as if the sculptor just chooses the horse’s attitude to suit personal artistic preference…