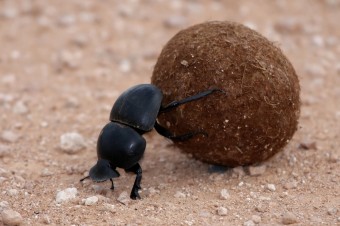 Dung beetles have long surprised scientists with their remarkable navigation abilities, despite the relatively small sizes of their brains. Scientists have also known that after dung beetles collect the dung, they do a little dance on top of it before moving it in a straight line to their destination. The dancing was once written off as a “happy dance,” but now we know better—it actually helps the dung beetle get its bearings as it dances around in circles, looking at the stars.

This behaviour, as well as the fact that dung beetles have specialized eyes which analyse the direction of light polarization, first led researchers to hypothesize that the beetles might be using the sky to navigate. During the day, it was easy to see that they were using a pattern of polarized light around the sun in order to navigate. But no one knew exactly how they continued to navigate at night, which led to the hypothesis that they might be using the moon.

To test the hypothesis, researchers led by Marie Dacke conducted a variety of different experiments. They set up a circular arena with high walls in South Africa, blocking out views of everything but the sky. They then timed dung beetles—in this case, Scarabaeus satyrus—on how long they took to cross the arena. The beetles were tested in different conditions: with the moon out, with no moon, and with an overcast sky. Some of the beetles were equipped with cardboard caps which forced their eyes downward, so they weren’t able to see the sky at all under any conditions.

What the researchers found was that dung beetles had a tough time staying in a straight line when there were clouds obscuring the sky and when they were wearing the caps. However, when there was a clear sky with no moon, the beetles were still able to navigate correctly. This led to the idea that they were using stars to navigate. That led to a potential problem. As Dacke said, “We thought that they could be using the stars [for orientation], but dung beetles have such small eyes that they don’t have the resolution, or sensitivity, to see individual stars.” 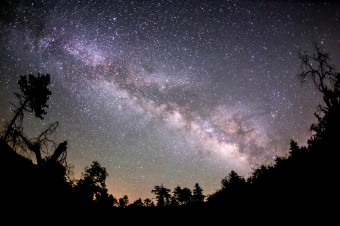 To investigate this further, the researchers repeated the experiments under slightly different conditions. They moved the arena to a planetarium where they were able to control which stars the dung beetles were able to see. Once again, some of the beetles wore caps. This time, they showed the beetles the brightest stars, showed only the Milky Way, and then showed the entire sky. What they found was that the beetles were slow to cross the arena when the brightest stars were visible, but they crossed at normal speed when only the Milky Way was visible and when the entire sky was visible. The beetles with caps had difficulty crossing no matter what.

The researchers concluded that the beetles must be using the Milky Way in order to navigate. This falls in line with the findings of a similar experiment that used a different type of dung beetle, the Scarabaeus zambesianus, which was unable to move in a straight line when the Milky Way wasn’t visible.

Of course, in the Northern Hemisphere, the Milky Way is less distinct than in the Southern Hemisphere, and it’s possible that dung beetles in the Northern Hemisphere are using a different gradient of light than the southern beetles. But the revelation that southern beetles are able to use the Milky Way to navigate is big news from the animal kingdom. They are the first insects known to use the stars for navigation (outside of our sun, which insects like honey bees do use as one of many reference points for navigation; this is particularly fascinating because these bees will adjust for the change in the sun’s location at a given time of day when communicating locations of things to their fellow bees, even if their communication takes many hours.  See: Honey Bees Know the World is Round and Can Calculate Angles.)

The ability to roll a ball of dung in a straight line is crucial for the survival of dung beetles. After they create a ball of dung, they have to roll it away from the pile as quickly as possible to avoid having their prize stolen by one of their peers. They don’t have time to wander around or accidentally circle back to the pile; they have to get out of there fast. Once the pile of dung is a safe distance away, the dung beetle will bury it and it becomes food for the beetle’s offspring.